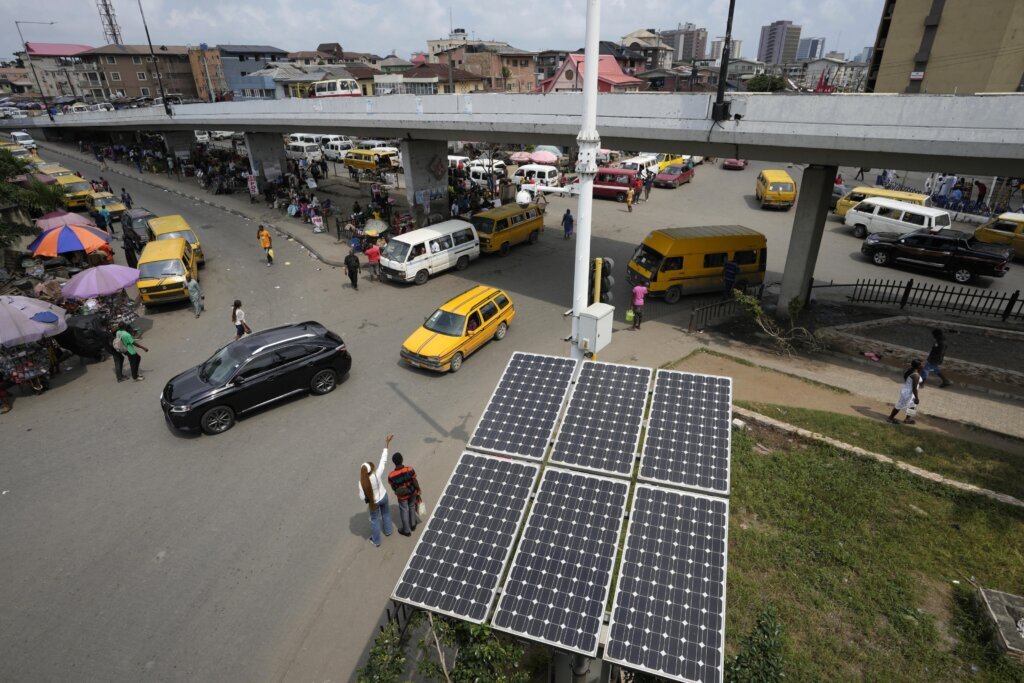 MOMBASA, Kenya (AP) — In Kenya’s semi-arid Makueni County, 50-year-old Purity Kinyili used to spend most of her time traveling for water and firewood to sustain her family and farmland.

But then the government set up an initiative to install solar energy in rural towns, so she got hold of the easy-to-install panels, set them up and sunk a solar-powered borehole. Now her once dry land has turned a lush green, and she’s even got enough power left over for electricity in her home.

Access to more and cleaner energy while continuing to grow economically will be a top priority for African nations in the upcoming United Nations climate conference in November, top officials and climate experts on the continent said.

As part of the Africa’s goal for what’s called a “just transition” — ensuring that the buildout of clean energy is fair and inclusive — the African Union wants to boost access to electricity and clean cooking resources to hundreds of millions of people. It’s estimated that 600 million people out of 1.4 billion living on the continent don’t have electricity, with 900 million lacking access to cleaner cooking fuels.

But some experts argue that improving living standards means that Africa will, at least temporarily, have to increase its output of fossil fuels.

Africa needs longer timeframes and more financial resources to move towards clean energy if it still wants to meet its social and economic growth goals, Harsen Nyambe, the director of sustainable environment and blue economy division at the African Union, told the Associated Press.

He said that while a just transition is “good”, he urged the need to be “realistic” about expectations for African nations as the continent is also trying to develop infrastructure with fewer resources, while already dealing with the effects of a warming climate.

Africa is particularly vulnerable to climate change, with little resources to adapt to hotter and drier temperatures in some areas and extreme downpours in others. The Horn and east of Africa are suffering from ongoing and devastating drought which has left populations with little food and water, while southern nations are battered by deadly cyclones with growing frequency.

“We have different capacities and responsibilities,” Nyambe said, adding that Africa could, for example, be given up to 100 years to transition away from dirty fuels.

Many nations, particularly developed countries like the U.S. and in Europe who are responsible for a larger share of heat-trapping gases in the atmosphere, are looking to achieve “net zero” emissions by 2050. China hopes to achieve the net zero goal by 2060, and India by 2070.

Africa already emits far less carbon dioxide than other continents or individual nations, accounting for just 3% to 4% of emissions despite being home to nearly 17% of the world’s population, said James Murombedzi, who heads the Africa Climate Policy Centre.

To achieve “net zero”, countries would need to dramatically cut down their greenhouse gas emissions while offsetting the remainder with projects that suck carbon dioxide out of the atmosphere. Tree-planting projects have sprung up across the continent, such as in Lufasi Park in Nigeria or Mozambique’s mangrove restoration projects, mostly from private investors looking to counterbalance their own polluting activities.

But experts say local governments are not yet able to invest the required funding for such large carbon-absorbing projects.

“There is pressure for the net zero by 2050. I think as Africa we should not give in to the pressure given our circumstances,” Nyambe said, referring to Africa’s lack of financing and growing infrastructure needs.

He said any emissions targets “should be accompanied by resources. Because how do you transform without capacity, finance and technology?”

Nyambe added that that getting the right financial support at the U.N. climate conference, known as COP27, can help kickstart Africa’s transition to cleaner energy.

The African Union has pointed to natural gas as “transition fuel” for Africa’s energy needs, alongside renewables, hydrogen and nuclear energy, although some experts have questioned whether gas should be used in a move toward cleaner sources. Although natural gas emits less carbon dioxide than other fossil fuels, building up gas infrastructure may slow efforts to move to renewables, they say.

“Africa is embracing a clean energy future but will do so based on its needs and circumstances,” said Linus Mofor, a senior environmental affairs advisor at the United Nations Economic Commission for Africa. “The use of natural gas, which is plentiful in the continent, is critical.”

Mofor added that the “transition to renewable energies will require substantial capital investments. By 2030, Africa will need $2 trillion to address its energy transformation.”

Smaller projects, such as off-grid solar panels to bring electricity to rural areas or rooftop solar panels, are also being installed across the continent, with Kenya, South Africa and Nigeria leading the way.