WEST HAM fans were served beer by an old enemy before their Europa Conference League match in Denmark on Thursday evening.

The Hammers edged past Danish outfit Silkeborg 3-2 to maintain their perfect start to European competition this season.

But prior to the match, one West Ham fan shared a clip of a flock of Irons supporters being served by ex-Bolton star Henrik Pedersen.

Pedersen, 47, who also spent a decade with Silkeborg across two spells, could be seen pulling pints in his own pub.

And the caption for the video brought back a few memories for West Ham fans as they are well aware of the former Bolton man.

It read: “Ex-@SilkeborgIF and Bolton player Henrik Pedersen keeping us @westham fans hydrated in his bar! 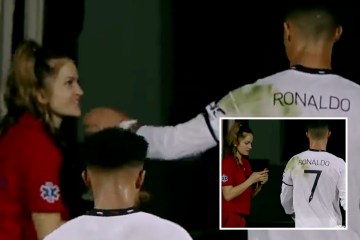 “We’ve forgiven him for relegating us all those years ago!🤣.”

The relegation being referenced came back in the 2002/03 Premier League campaign.

Pedersen helped Bolton to safety by just two points as they finished the season in 17th place.

But West Ham were the unlucky side that dropped down to the Championship as a result.

The East London outfit finished two points below Bolton and were relegated.

It would take the Hammers two seasons to return to the top flight, before they did so through the play-offs in 2005.

Meanwhile, Bolton remained in the Prem for nine more campaigns, before eventually dropping down to the Championship in 2012.

Since then, they have gone as low as League Two, but are now back in League One.