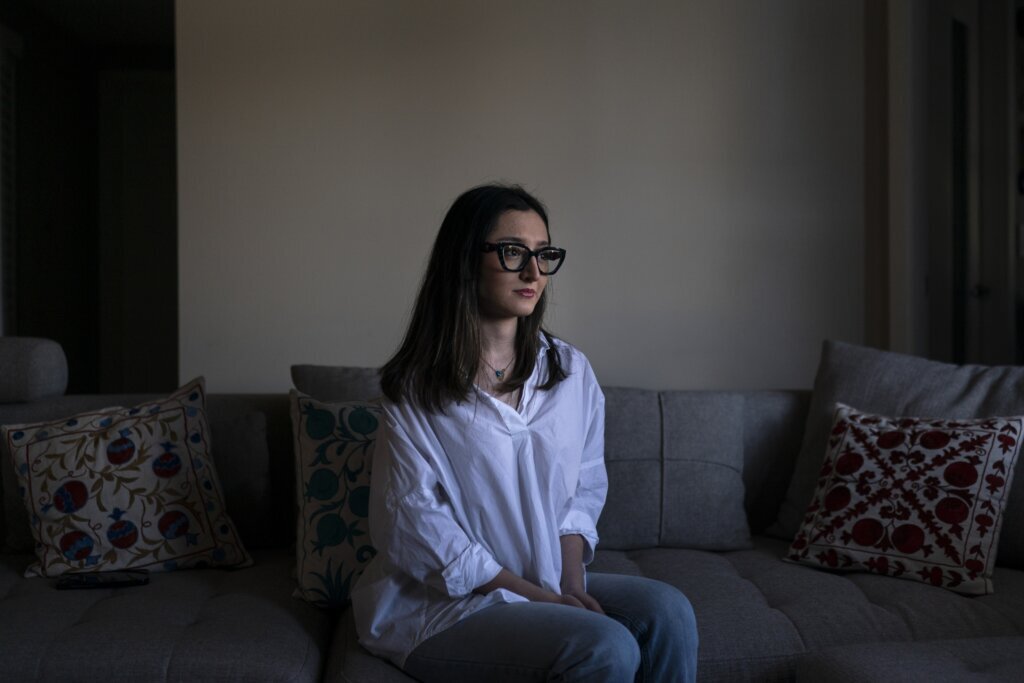 LOS ANGELES (AP) — Two years ago, Leili Ghazi quit studying biomedical engineering in Iran and seized the chance to travel to the United States to build a new life for herself and her parents.

Now, the 22-year-old is separated indefinitely from her family because her father performed required military service more than two decades ago as a conscript for a branch of the Iranian armed forces that the U.S. government years later declared a foreign terrorist organization. The designation bars anyone associated with the group from traveling to the United States, including her dad.

“He had to do office work and work on plans of buildings,” said Ghazi, who has been anxious and depressed since moving to Southern California. She expected her parents to eventually join her but later learned her father would be forced to stay behind. “He hasn’t done any activity of going to war or anything. It was not anything like that.”

It has long been a challenge for Iranians to travel to the United States and visa applicants often wait months or years for background checks to clear. But since the Trump administration designated Iran’s Islamic Revolutionary Guard Corps a terrorist organization in 2019, it has become all but impossible for anyone who served in the branch, even as a conscript and in a non-combat role, to obtain a visa to travel to the United States.

Many Iranian Americans and their families hoped the Biden administration would reverse course on the designation so those who served as conscripts could still travel. They note Iranian men are compelled to serve if they want to obtain passports to leave the country, have no say over what branch they’re assigned to and largely perform basic tasks such as painting or office jobs.

But their hopes were dashed when U.S. Secretary of State Antony Blinken said in late April that barring changes in Iran there was no plan to remove the designation. He acknowledged in remarks before U.S. lawmakers that those most affected are the conscripts while “the people who are the real bad guys have no intention of travel.”

“There should be exceptions, and right now we don’t have exceptions,” said Ally Bolour, a Los Angeles immigration attorney whose firm has sued over how the designation is applied. “It is unfair for the U.S. government to just throw a towel over everything and just lump everybody together. That’s lazy.”

The U.S. has designated a lengthy list of foreign terror organizations dating back to the 1990s, including Hamas and Peru’s Shining Path. But the groups are almost entirely private militias, not state-run entities, like IRGC, that enlist conscripts under the law.

The secretary of state designates the groups in consultation with the attorney general and treasury secretary, and with congressional review, and can also revoke designations. For example, the Revolutionary Armed Forces of Colombia was listed as a foreign terror organization in 1997 and delisted in 2021.

People who provide support or resources to foreign terror organizations and who aren’t U.S. citizens can’t legally enter the country and can face deportation. In addition, financial institutions that control funds for these groups must retain possession of the funds and report them to U.S. authorities.

A U.S. State Department spokesperson could not immediately say how many former Iranian conscripts have had visa applications affected by the designation. The spokesperson said applications are reviewed on an individual basis and in some cases waivers can be applied. The designations “play a critical role in our fight against terrorism and are an effective means of curtailing support for terrorist activities and pressuring groups to get out of the terrorism business,” the spokesperson said.

Immigration attorneys, however, said they’re fielding tons of calls from former conscripts dealing with the issue and don’t see exceptions being made. Attorney Scott Emerick, who works with Bolour, said he has received hundreds of calls and believes the government can make exceptions for conscripts who didn’t serve voluntarily.

Taher Kameli, an attorney in Chicago who has also sued, said he fields calls daily from people asking how the designation affects them. He said he doesn’t believe the U.S. government can list another country’s military as a foreign terrorist organization and notes past administrations also had issues with the branch and refrained from making the designation due to the consequences it would bring.

“We are not here to say the IRGC is doing something right or wrong. We are just saying the way the designation is done is wrong,” said Kameli, who represents an Iranian-born U.S.-educated doctor affected by the rule.

The fallout from the designation stretches far beyond the United States. Iranians said the U.S. shares data on travelers with countries in Europe and Canada, and they fear they’ll be blocked from traveling there as well.

Several Iranian-born Canadian citizens said they’ve faced additional scrutiny during what were previously quick and easy trips across the border. Amir Abolhassani, a 41-year-old engineer, said he had traveled many times to the United States without a problem as a Canadian citizen, but he was recently stopped by authorities on a trip to North Carolina where his company planned to transfer him for a new job.

Abolhassani was told he couldn’t go because of his conscription more than a decade ago, which he said consisted of two months of basic training and designing water pipelines for the branch. He said he was assigned at random and the service was necessary so he could obtain a passport and leave the country to continue his education.

Now, he and his wife are in limbo because they have already sold their home to make the move but can’t get visas.

“The worst part is that they tell you you are a terrorist,” Abolhassani said. “We have come out of that country because we were against their policies, because we were against their behavior, and now saying, ‘You belong to that system, you belong to that regime, you are part of the organization we have listed as a terrorist organization’ — that is very unjust. That is unbearable.”

The designation also weighs heavily on Iranian citizens who have lived in the U.S. with green cards for years and want to become American citizens.

Paris Etemadi Scott is legal director of PARS Equality Center in San Jose, California, which provides legal and social services to immigrants from Persian-speaking and other countries.

She said she now tells most clients who have served in the contested branch — or those whose spouses did — to think twice about applying to naturalize because when they go to an interview they’ll face a barrage of additional questions and be forced to sign a detailed statement under oath about their long-ago military service.

“We thought this was a Trump thing but obviously nothing has changed,” she said. “I tell them, ‘I don’t have the stamina anymore to go through this ordeal. We advise you to wait and see.’”