LUKE HARRIS could make a shock late run to the World Cup finals with Wales.

Fulham’s uncapped 17-year-old attacker has been called up in the Dragons’ 28-man squad for next week’s Nations League ties against Belgium and Poland.

Despite the shock inclusion, Wales boss Robert Page has refused to rule Harris out of contention for the final 26-man squad he will take to Qatar in November.

Page said: “I never say never – absolutely. I have pretty much got the squad in mind, of course. But the door is never closed.

“If someone is doing really well and I think it’s going to benefit us, then he will be considered.”

Harris’ shock call-up will evoke memories of Theo Walcott, who was a bolter for England’s 2006 World Cup squad under Sven Goran Eriksson. 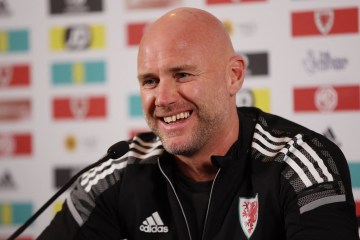 Highly-rated Harris played for Fulham in their EFL Cup 2-0 defeat to Crawley and has been on the bench for Premier League matches under Marco Silva.

Page added: “He has been in the system now for a few years. He’s a talent and an exciting prospect. He’s at a club who have recognised that potential in their pre-season and have fast-tracked him through.

“He’s got some ability, he’s doing really well at his club and he scores goals. I like that he’s an attack-minded player, but he also has an eye for goal.

“When you have someone scoring goals – including regular hat-tricks – then it makes him an exciting prospect and one I can’t wait to get involved with the other boys.

“When you have someone with that talent – albeit that he’s just turned 17 years old – then I am not bothered about his age.

“I have shown that in the past with Rabbi [Matondo], Joe Rodon and DJ [Dan James] and others I have worked with at U21 level and the younger age groups. If I think they are good enough, they will come in and be part of the environment.

“For these two games, I think it’s a great opportunity for him to come in and get a taste of it, to experience it, and for us to have a look at him. I’ve spoken to the coaches who have worked with him and he’s absolutely ready for it.”

Fulham team-mate Harry Wilson misses out after only returning to light training this week following a knee injury while Nice midfielder Aaron Ramsey is also out with a hamstring injury.

China’s Xi visits Kazakhstan ahead of summit with Putin