MARTIN ODEGAARD has blasted the officials for ruling out Gabriel Martinelli’s goal during Arsenal’s 3-1 defeat to Manchester United.

Arsenal forward Martinelli had the ball in the back of the net against the run of play early in the first half, but the goal was disallowed after it was deemed Odegaard had fouled Christian Eriksen.

And the Arsenal captain was clearly upset by this decision.

Speaking after the game, he said: “In my opinion it is never a foul.

“A soft challenge and for VAR to come in it has to be clear and obvious. Very, very soft.

“You can make it look worse on camera. Never a foul, the referee said play on.” 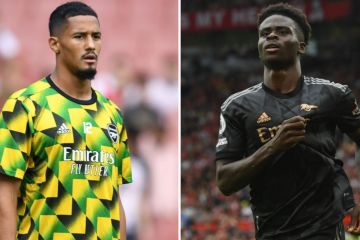 And Arsenal fans were clearly in agreement with the 23-year-old.

One described Martinelli as being “cheated” and another labelled VAR as “an absolute joke.”

United were on the back foot for the majority of the half after the disallowed goal, but managed to find an opener thanks to a swift counter-attack which saw United new boy Antony score a debut goal.

Mikel Arteta’s side came out of the blocks firing in the second half and scored a deserved equaliser through Bukayo Saka.

However, some lovely craftsmanship from Eriksen and Bruno Fernandes was finished off by Marcus Rashford to restore United’s lead.

A disastrous change of shape for The Gunners then condemned them to the ignominy of conceding a third as they lost any control from the game and saw their 100% record shattered.