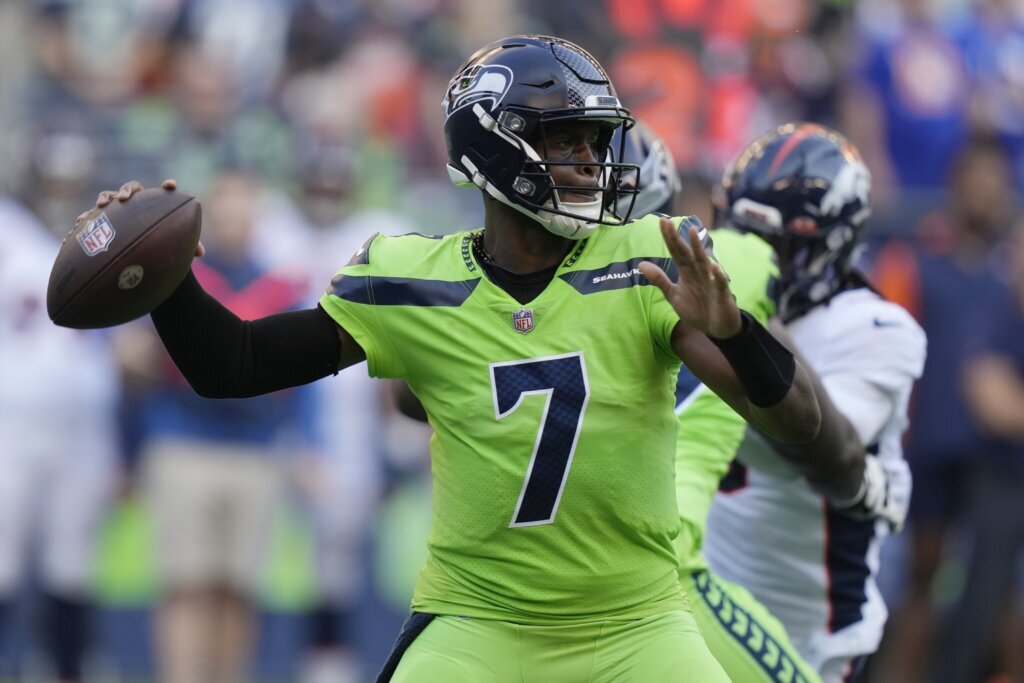 SEATTLE (AP) — Hearing his name chanted as he left the field as a winner for the Seattle Seahawks wasn’t validation for Geno Smith.

It was gratification that eight years after he last was a starting quarterback on the opening weekend of the NFL season he again had the opportunity.

“As far as worrying about naysayers, anything like that, I don’t get into that type of stuff,” Smith said. “People can write you off, but life is about what you make it and so I’ve just been blessed enough to be in the NFL for 10 years, and been working my butt off, and it’s a team game and we got to win tonight as a team.”

With most of the attention on Russell Wilson’s return to Seattle on the other side of the field, it was Smith and the Seahawks celebrating a 17-16 win on Monday night.

Wilson had the more memorable evening, from the boos that cascaded down on him from Seattle fans, to Denver’s decision not to go for it on fourth-and-5 and instead attempt a 64-yard field goal in the closing seconds.

But it was Smith that was in the celebratory locker room afterward, the one that Wilson called home for a decade.

“He’s had it in his whole time. He just hasn’t had the perfect opportunity for him to go out there and showcase what he really is able to do when he’s in full control of a football team or of an offense,” Seattle wide receiver DK Metcalf said.

Smith was spectacular in the first half and perhaps more of what was expected in the second half as Seattle was shut out. He finished 23 of 28 for 195 yards, but was 17 of 18 for 164 yards and two touchdowns in the first half.

Smith threw a 38-yard touchdown to Will Dissly on Seattle’s first possession of the season. He added a 25-yard strike to Colby Parkinson in the second quarter that gave Seattle a 17-7 lead at the time. He jogged off the field at halftime to chants of “Geno, Geno.”

That big half proved to be enough, but barely.

“He was so poised and so calm in this game. It was just fun playing with him,” Seattle coach Pete Carroll said. “And we’re talking as the game is going on, he’s having fun and laughing and enjoying it. The moment came to him and he was ready for it.”

Smith’s second season in the NFL, in 2014, was the last time he started on the opening weekend of the season. It was the first time since 1971 there had been that large of a time gap for a quarterback between opening week starts.

Smith appeared to relish his opportunity. He played fearless and the Seattle crowd — already amped by Wilson’s return — roared its approval. When Smith lowered his shoulder on a 14-yard scramble late in the third quarter rather than sliding, the Seahawks fans followed with more chants of his name.

For all Smith did right, Seattle’s offense was inefficient in the second half. The Seahawks had just 34 total yards and five first downs after halftime. Seattle had less than 10 minutes time of possession in the third and fourth quarters.

It made for a nervy final few moments for Smith as he watched Denver try to rally. It created flashbacks to the past three seasons serving as Wilson’s backup and watching him lead the Seahawks in games and practices down the field in those late-game situations.

“For so long, I watched Russ go down and win those games,” Smith said. “It was a surreal moment seeing him on the other side, up against our defense, going for one of his vintage comeback wins, and we stood up tonight and I was happy about that.”