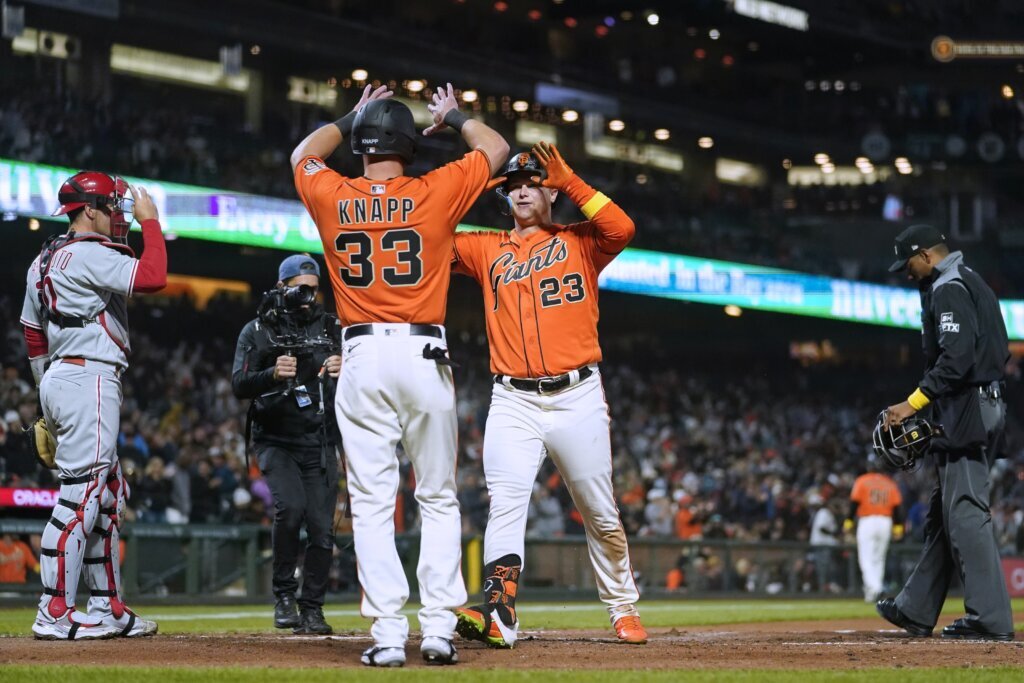 Cobb (5-6) allowed just three hits and a walk in earning his first career win against Philadelphia, which has lost four of five.

The Giants jumped on Phillies starter Kyle Gibson for four runs in the first inning and three more in the second. Gibson (9-6) allowed a season-high seven runs on five hits and four walks in 1 2/3 innings.

Pederson, Crawford and Longoria produced consecutive run-scoring hits in the first inning. Crawford scored on a wild pitch to make it 4-0.

Pederson broke it open in the second with his 21st home run, a three-run shot that splashed into McCovey Cove beyond the right-field wall.

San Francisco kept piling on with four runs in the third inning on a sacrifice fly by Knapp and bases-loaded walks from Flores, Pederson and Longoria. The Giants drew a season-high 10 walks.

Estrada singled home another run in the fifth. Knapp added an RBI groundout in the eighth.

Philadelphia’s Alec Bohm ended the shutout bid with an RBI single in the ninth.

Phillies catcher Garrett Stubbs pitched the bottom of the eighth inning, allowing a run on one hit. Giants outfielder Luis González pitched the top of the ninth, giving up a run on two hits.

In honor of Childhood Cancer Awareness Day, both teams wore gold ribbons on their jerseys to honor children battling cancer. The Giants also replaced traditional player photos on the scoreboard with drawings by children diagnosed with cancer.

Phillies: OF Nick Castellanos returned to the lineup after missing three games with turf toe. He started in right field and went 0 for 2. … RHP Zack Wheeler (right forearm tendinitis) underwent an MRI on Thursday which revealed minor inflammation but no structural damage. He will be reevaluated Monday or Tuesday. … RHP Zach Eflin (right knee bruise) threw about 30 to 35 pitches in a bullpen session. He will throw at least one more bullpen before beginning a rehab assignment. … RHP Seranthony Domínguez (right triceps tendinitis) is progressing well and will throw a bullpen session Saturday. … LHP Bailey Falter feels better after leaving Wednesday’s start with right groin tightness and is expected to make his next start.

Giants: 1B Brandon Belt will undergo season-ending arthroscopic surgery on his right knee Saturday. “It’s obviously disappointing for Brandon and for all of us,” manager Gabe Kapler said. “We’ve been trending in this direction and Brandon has fought it so hard and wanted to be out there for his teammates and for all of us, and we just weren’t able to get over the hump.” … LHP José Álvarez underwent Tommy John surgery Wednesday and is resting at home in Florida. … OF Austin Slater remained out of the lineup with a dislocated left pinkie, though he is not expected to go on the injured list. … C Joey Bart (concussion) will resume baseball activities over the weekend. “He’s feeling much better,” Kapler said. “We anticipate that he’ll be ready to play on Tuesday and potentially back in the lineup then, Tuesday or Wednesday.”

RHP Noah Syndergaard (8-9, 3.98 ERA) makes his sixth start for the Phillies on Saturday. He is 3-1 with a 4.40 ERA since being acquired from the Los Angeles Angels on Aug. 2. The Giants counter with RHP Jakob Junis (4-4, 4.04), who has lost three straight decisions since his last win on June 10 against the Los Angeles Dodgers.