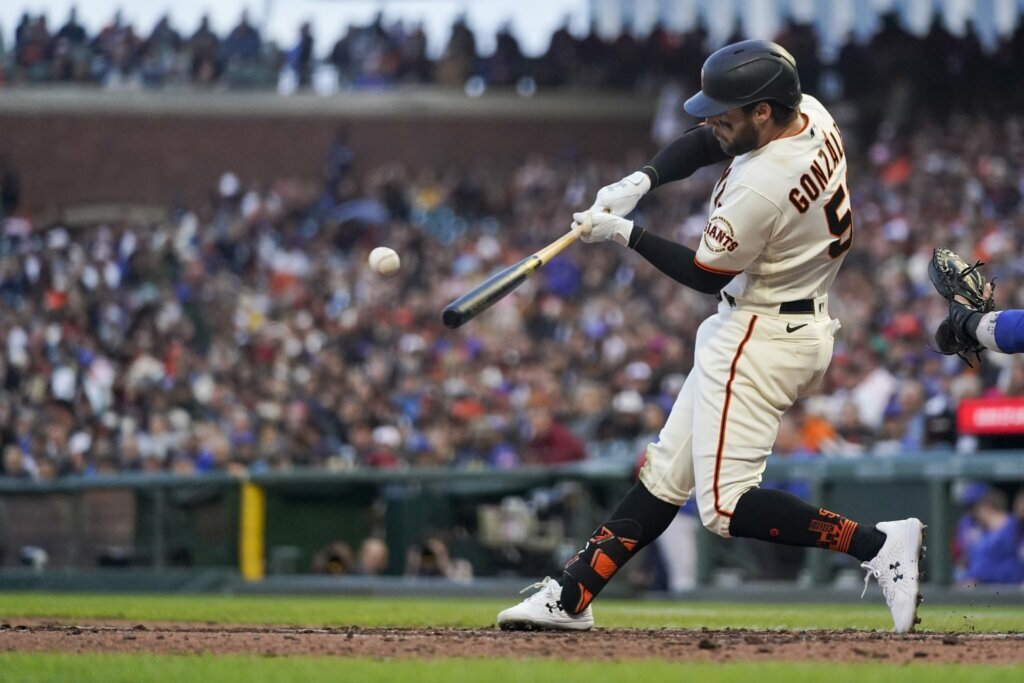 SAN FRANCISCO (AP) — Luis González and Joey Bart homered on consecutive pitches in the fourth inning and the San Francisco Giants withstood a late rally by Chicago and beat the Cubs 5-4 on Saturday night.

Austin Slater doubled home Darin Ruf in the bottom of the third to start the scoring for San Francisco. Yermín Mercedes followed with an RBI single to make it 2-0.

After David Villar led off the bottom of the fourth with a single, González hit a two-run homer off Cubs starter Drew Smyly. On the next pitch, Bart homered to left to give the Giants a 5-0 lead.

Chicago charged back beginning in the seventh inning when Nelson Velazquez drove in a run with a pinch-hit single.

The Cubs rallied in the ninth, loading the bases with no outs. Chicago scored twice on fielder’s choice grounders by Velazquez and Willson Contreras, and added another run on an RBI groundout by Seiya Suzuki.

With Contreras representing the tying run at second base and two outs, Dominic Leone got Ian Happ to ground out, earning his third save in six chances.

Smyly (3-6) allowed five earned runs in four innings against his former team. The left-hander, who pitched for San Francisco in 2020, allowed seven hits and two walks, striking out five.

Giants shortstop Thairo Estrada left the game early after being hit by a pitch in the helmet in the fifth inning.

Cubs reliever Mark Leiter Jr., recalled earlier Saturday from Triple-A Iowa, hit Estrada with an 84 mph changeup, sending him to the ground. Estrada was on his back and spoke to training staff, eventually getting helped to his feet and back to the clubhouse.

Jason Vosler ran for Estrada and took over at shortstop.

HONORING WILL THE THRILL

Before the game, the Giants retired longtime first baseman Will Clark’s number 22 jersey. Clark spent eight of his 15 major-league seasons with San Francisco, making five All-Star appearances with the franchise and earning the 1989 NLCS MVP award.

“A lot of anticipation leading up to it and it was a lot of fun being on the field,” Clark said. “I was soaking it all in. … It was really special.”

Among those who gave speeches were former teammates Barry Bonds, Kevin Mitchell and Mike Krukow. Several other Giants legends were on hand, including Buster Posey and Bruce Bochy.

Clark thanked his former teammates and coaches, as well as the fans of San Francisco, in a passionate speech, receiving a thunderous standing ovation from the sellout crowd at Oracle Park.

“We’ve had a really good bullpen,” manager David Ross said. “He’s been a big part of that. So I’m happy that he gets to go on and continue to chase another championship. His time here was good.”

The 27-year-old McKinstry has appeared in 10 games this year, going 1 for 11 with a home run and two RBI. He is expected to join the Cubs in the next couple of days.

Cubs: 2B Nick Madrigal (left groin strain) and SS Andrelton Simmons (right shoulder strain) made rehab starts for Triple-A Iowa on Saturday. Madrigal went 2 for 3 with two singles and a walk. Simmons was 0 for 4 with three strikeouts.

Giants: SS Brandon Crawford (left knee inflammation) ran on the field and took batting practice before the game. He is expected to go on a rehab assignment in the coming days.

Giants LHP Carlos Rodón (8-6, 3.18) has allowed five earned runs in each of his last two starts.

Pooja Vastrakar Will Join Team India In Birmingham After Recovering From Covid-19: Reports

ZIM vs BAN Live Streaming Details- When And Where To Watch Zimbabwe vs Bangladesh Live In Your Country? Bangladesh Tour of Zimbabwe 2022, 2nd T20I