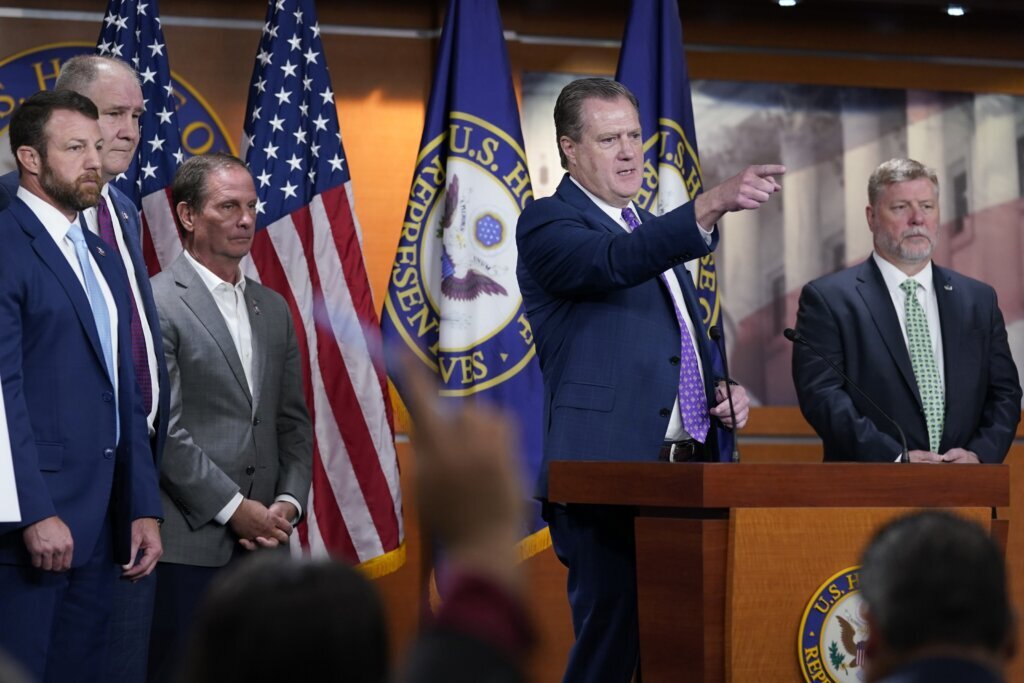 WASHINGTON (AP) — Republicans in Congress who are relying on Donald Trump to excite voters in the fall elections are not only defending the former president against the FBI search of his Mar-a-Lago home but politically capitalizing on it with grave and potentially dangerous rhetoric against the nation’s justice system.

The party that once stood staunchly for law-and-order has dramatically reversed course, stirring up opposition to the FBI and tapping into political grievances and far-right conspiracies that fed the deadly Jan. 6, 2021, attack on the U.S. Capitol.

It’s all part of the GOP’s election year strategy to harness voter outrage over the unprecedented search, quickly and unequivocally set in motion as Trump hosted a dozen Republicans for dinner of steak and scallops at his private Bedminster club the day after the FBI action.

One Republican at the table, Rep. Troy Nehls of Texas, a former sheriff, said he told the former president “loud and clear” that it’s time to protect himself politically by declaring his 2024 campaign for the presidency.

“Mr. President, I said, the American people, your supporters, are concerned with this corrupt DOJ and the FBI.”

“If I were you, sir, announce you’re running for president,” Nehls recalled telling Trump. “Take that doubt, take that anxiety away from the people that want you to be our 47th president.”

The escalating rhetoric comes amid stark warnings of violence against law enforcement, including the Ohio police shooting Thursday of an armed man clad in body armor who tried to breach the FBI’s Cincinnati office and engaged in an hours-long standoff. The day before, FBI Director Christopher Wray had called the threats to agents and DOJ “deplorable.” The FBI has warned its agents to take precautions, citing an increase in social media threats to bureau personnel and facilities. In some extreme cases, GOP lawmakers and others are demanding the FBI be dismantled and defunded.

It’s all coming at a time of blistering attacks on the nation’s civic institutions that experts say is worrisome, if not dangerous, for the future of U.S. democracy. With no branch of government unscathed, the discord risks sowing distrust in the White House, the Congress and the Supreme Court. It has kept security tight in Washington, limiting public access to the government.

“All of this rhetoric is being thrown around without any consideration for possible consequences,” said Frank Montoya Jr., a retired FBI special agent who led the bureau’s field offices in Seattle and Honolulu.

“All that does is stir up that minority within the base that aren’t satisfied with just words, they actually want to act it out.”

Heidi Beirich, co-founder of the Global Project Against Hate and Extremism, said, “The vitriol coming from extremists, white supremacists and others, has been overwhelming,” pointing to rhetoric from Trump’s former campaign manager Steve Bannon and others warning of assassinations or calling for civil war.

“We usually expect that from these quarters, but the same kind of rhetoric is coming from prominent Republicans and Trump allies,” she said by email. “These comments coming from Republicans are really worrying as they are mainstreaming violent rhetoric.”

Asked Friday at the Capitol about the responsibility leaders have to tone down the rhetoric and keep the nation calm during times of uncertainty and distress, House GOP Leader Kevin McCarthy demurred — and blamed Attorney General Merrick Garland.

“I think the attorney general has a real problem here,” McCarthy said.

McCarthy, who is in line to become speaker if his party wins House control, revived Republican concerns that Trump is being treated unfairly, as the first former president to have his home searched by the FBI, and he criticized the attorney general for delivering only a few minutes’ explanation during a press conference.

In McCarthy’s view, it was Garland, not his own party’s rhetoric, that was dividing the nation.

Republicans believe the Justice Department has been overly tough on Trump going back to the Russia investigation into allegations the president was colluding with a foreign entity, including when he called on Russia to release emails it had stolen from the Democratic National Committee during the 2016 presidential election.

The Republicans contrast the FBI search of Trump’s private club and residence with its treatment of Hillary Clinton, who was investigated for using a private email server in violation of government rules during her time as secretary of state — an offense the led to long chants of “Lock her up!” during Trump rallies.

The No. 3 House Republican, Rep. Elise Stefanik, claimed without evidence the Biden administration was “weaponizing” the Justice Department against Trump, a top potential 2024 rival for the White House.

She joined fellow House Republicans on the Intelligence Committee on Friday in demanding information, and vowed if their party wins control in the November election they will find out what happened.

“The House Republican majority will leave no stone unturned when it comes to transparency and accountability into the brazen politicization of Joe Biden’s Department of Justice and FBI targeting their political opponents,” Stefanik said.

Congressional Republicans have said their office phone lines are ringing from constituents outraged over the raid and they said they’ve never seen their colleagues more fired up to fight back — all the way to the November midterm elections.

Rep. Jim Banks, the Indiana Republican who organized the dinner with Trump, said they encouraged the former president to “kick off the campaign now” to seize the moment.

Banks said Trump will be a “big part” of the House Republicans’ campaign to win back the House majority.

House lawmakers returned to session Friday to vote, walking through metal detectors to screen against firearms, a legacy of the Jan. 6 assault on the Capitol. Lawmakers had a security briefing earlier this week to address ongoing threats against lawmakers.

House Speaker Nancy Pelosi said Friday that Trump’s role inciting the insurrection at the Capitol was sufficient cause to have concerns about inflammatory political rhetoric.

“You would think there’s an adult in the Republican room who would say, ‘Just calm down and see what the facts are and let’s go for that,’” Pelosi said, “instead of again instigating assaults on law enforcement.”

One republican, Rep. Brian Fitzpatrick of Pennsylvania, a former FBI agent, called on lawmakers to cool it.

“I don’t think any of this is okay,” Fitzpatrick told reporters.

He said, “So it’s incumbent upon everybody to act in a way that’s becoming of the office they hold — and that’s not casting judgment on anything until you know all the facts.”

Chelsea’s new star Koulibaly grew up with STONES for goalposts aged eight, but now he’s the rock of the Blues defence