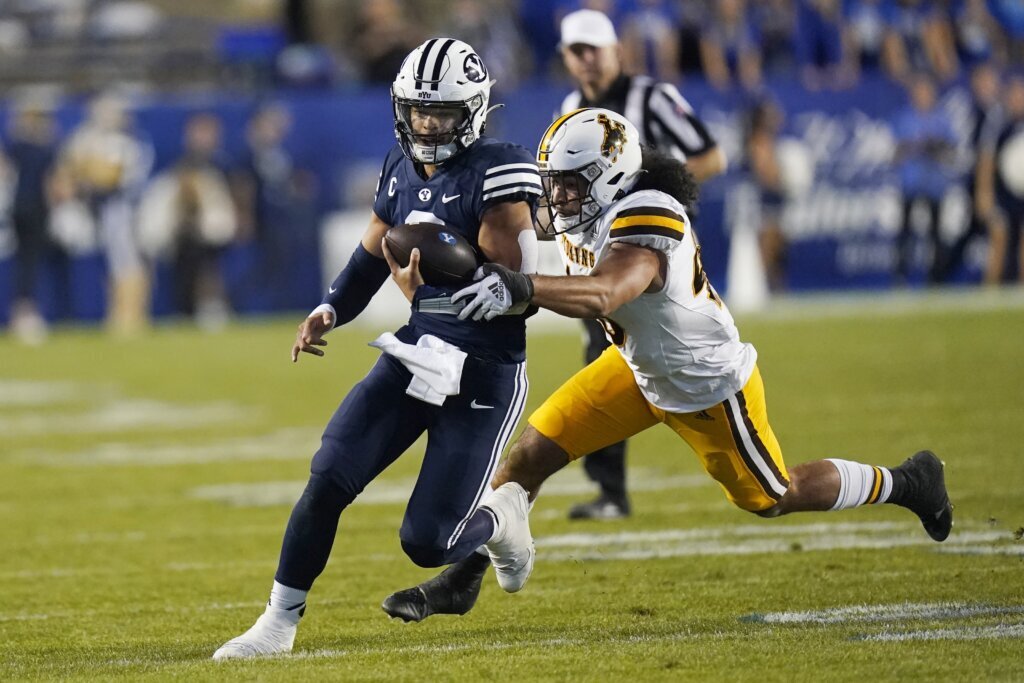 Hall became the 20th BYU quarterback to hit 4,000 career yards passing while completing 81% of his attempts. Keanu Hill finished with a career-high 160 yards and two touchdowns on five catches to lead the Cougars.

Andrew Peasley threw for 154 yards and two touchdowns to lead the Cowboys. Titus Swen added 78 yards on 20 carries. Wyoming (3-2) lost to BYU for the ninth straight time in the series.

Hall completed eight straight passes to open the second half and threw for a pair of touchdowns to help the Cougars break open a close game in the third quarter. He hit Kody Epps on a 3-yard strike and then found Hill on a 9-yard toss to cap back-to-back nine-play drives and extend BYU’s lead to 28-10 entering the fourth quarter.

Wyoming cut the deficit to 28-17 on Peasley’s 19-yard toss to Treyton Welch on the first play of the fourth. BYU slammed the door shut on a potential comeback when Hill caught a 68-yard pass and dragged a would-be tackler into the end zone with him. His second TD catch gave the Cougars a 35-17 lead with 5:31 remaining.

After going three-and-out on consecutive drives, BYU got on board with a 6-yard run from Christopher Brooks late in the first quarter. Hall set up the touchdown with a 47-yard pass to Hill and then a 32 yard toss off a flea flicker to Isaac Rex. The Cougars covered 91 yards in just four plays.

Wyatt Wieland’s 4-yard run capped off a 10-play Wyoming drive that chewed nearly five minutes off the clock and gave the Cowboys a 10-7 lead early in the second quarter. BYU answered with its own long scoring drive, covering 76 yards in 13 plays – culminating in a 3-yard catch by Braden Cosper – and took a 14-10 halftime lead. Hall converted three third downs to keep the drive going with three passes each covering 13 or more yards.

Wyoming: The Cowboys ran the ball successfully against BYU early. Wyoming averaged 5.8 yards per carry in the first quarter and totaled 69 yards rushing. That production on the ground dipped to 2.8 yards per carry during the second quarter – and 28 total yards – when the Cougar defense adjusted to the Cowboys’ ground attack.

BYU: The Cougars finally found some life in their previously stagnant running attack. Five different players combined for 189 yards on the ground. Miles Davis, who entered the game as the No. 3 running back on BYU’s depth chart, led the way with a career-high 131 yards on 13 carries.

Beating a former conference rival could help BYU climb a couple of spots in the AP Top 25 Poll.