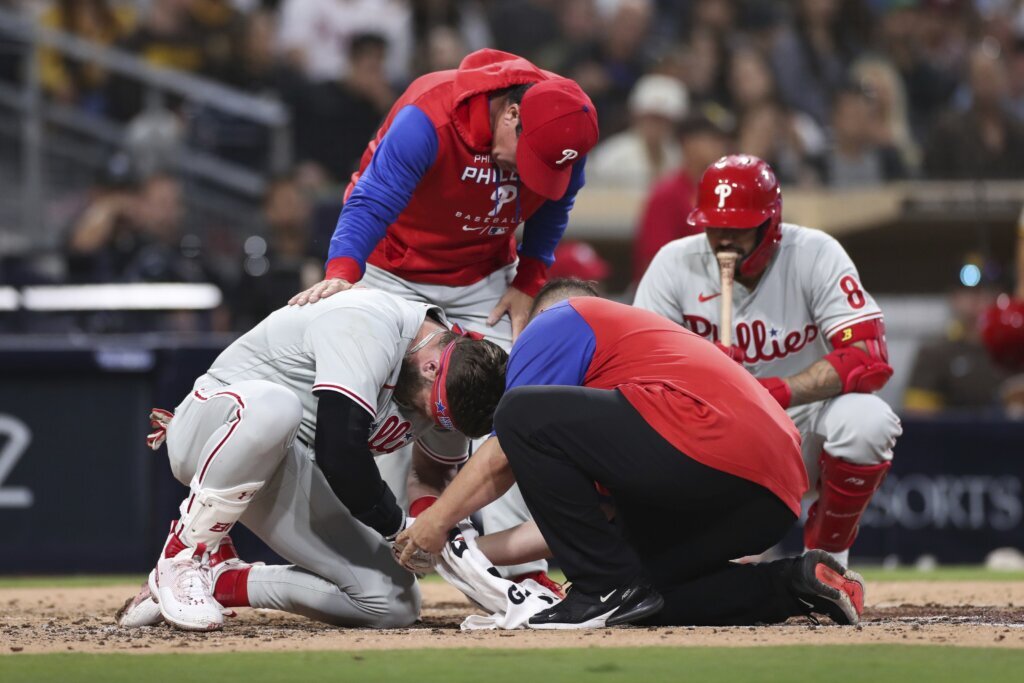 SAN DIEGO (AP) — Bryce Harper will be sidelined indefinitely with a broken left thumb after he was hit by a pitch from Blake Snell in the Philadelphia Phillies’ 4-2 victory over the San Diego Padres on Saturday night.

The reigning NL MVP checked his swing as the 97-mph fastball from Snell rode inside and high toward his shoulder before hitting him on the outside of the left hand in the fourth inning. Harper immediately fell to the ground and was in visible pain as he held his hand while on his knees for several minutes with Phillies head trainer Paul Buchheit attending to him.

Phillies general manager Dave Dombrowski, who traveled with the team on the road trip, said it was too early to determine if surgery will be needed. He added he wasn’t sure what type of fracture Harper had or where on his thumb the injury occurred.

“We will put him on the injured list (Sunday),” Dombrowski said. “I was concerned at first he got hit in the face. I was concerned right off the bat because he is a tough guy and he walked off the field immediately.”

As Harper was halfway to Philadelphia’s dugout, he angrily yelled at Snell and motioned with his hand at the Padres starting pitcher. Snell eventually shouted back at Harper. Many of the fans at Petco Park fans started to boo Harper after several seconds with Harper shouting at Snell.

Harper then appeared to cool down and say, “I know, I know” to Snell, acknowledging that the pitcher didn’t mean to hit him with the pitch.

“He knows (Snell) wasn’t trying to throw at him,” Dombrowski said. “It was just an emotional time. He has had bad luck — last year he was hit in the face and this year he has had a couple of injuries.”

The Phillies got all the runs they would need in this one off Snell (0-5) in the fifth inning. J.T. Realmuto hit a solo home run, and Alec Bohm followed with a double. Didi Gregorius singled to put runners on first and third, and Yairo Munoz had a run-scoring groundout and Kyle Schwarber an RBI single.

Phillies starter Zach Eflin (3-5) pitched five effective innings, allowing four hits — including Jorge Alfaro’s two-run double in the fifth — while striking out three and walking two. Seranthony Dominguez got three outs for his second save of the season.

Snell gave up four runs and six hits in 5 2/3 innings with four strikeouts and two walks.

Philadelphia will now have to move forward for much — or perhaps the rest — of the season without its biggest bat and run producer in Harper.

Harper, serving as the Phillies’ designated hitter, was replaced by Johan Camargo.

Harper is hitting .318 with 15 home runs, 48 RBIs and a .984 OPS this season in 64 games despite a small tear in the UCL of his right elbow that has prevented him from playing the outfield since April 16. He has tried to avoid season-ending Tommy John surgery with a platelet-rich plasma injection and rest.

Phillies: RHP Connor Brogdon was placed on COVID-19 list. It was unknown when he might rejoin the team. … To replace Brogdon, the Phillies selected the contract of Mark Appel, who was the first overall pick in the 2013 draft and had been pitching this season for Triple-A Lehigh Valley. It is his first time in the big leagues. He didn’t pitch Saturday night.

Padres: 3B Manny Machado took a notable step in his recovery from a sprained left ankle, taking batting practice and ground balls on the field before the game. Machado declined to comment on the status of his ankle, but manager Bob Melvin continued to express optimism that Machado could be available to pinch hit in the near future.

“We can’t meet the demand for Messi shirts”