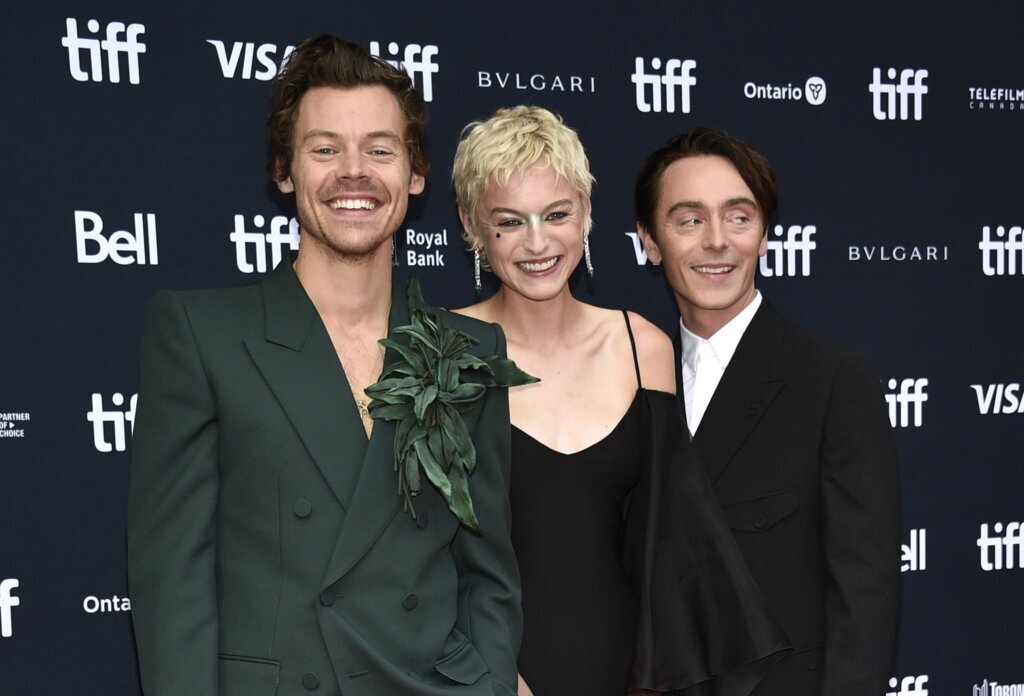 TORONTO (AP) — With just as much fanfare but a tad less drama, Harry Styles took the Toronto International Film…

TORONTO (AP) — With just as much fanfare but a tad less drama, Harry Styles took the Toronto International Film Festival by storm on Sunday, premiering the tragic gay romance “My Policeman” less than a week after the much-talked-about debut of “Don’t Worry Darling” in Venice.

“My Policeman,” in which Styles stars alongside Emma Corrin and David Dobson, features arguably the fullest dramatic performance yet from 28-year-old pop star. He stars as a closeted 1950s policeman in Brighton, England, who falls in love with a museum curator (Dobson) yet marries a local schoolteacher (Corrin). It’s a tasteful period piece, inspired by the life of “Howards End” author E.M. Forster, split between the ’50s and four decades later, in which the three characters are played by Gina McKee, Linus Roache and Rupert Everett.

Throngs of fans followed Style’s every move in Toronto, a whirlwind day that included a staged interview with the movie’s filmmakers and cast, a quick stop to pick up an ensemble award given by the festival to the “My Policeman” stars and the premiere, itself, in which the usual post-movie Q&A was shortened and trimmed of questions from the audience.

“My Policeman” revolves around an unresolved love triangle that plays out across 40 years due to the injustices of British ’50s-era laws against homosexuality and the repressions of several characters. Styles said he considered it a tragedy of lost time.

“The reason why the story is so devastating is that, ultimately, to me, the whole story is about wasted time, and I think wasted time is the most devastating thing,” Styles said at the earlier talk. “The only thing we cannot control. It’s the one thing you can’t have back. And I think the one thing that I think matters — whatever kind of life you’ve lived — at the end when you think back on time with people you love.”

Directed by Michael Grandage and adapted from the novel by Bethan Roberts, “My Policeman” is to open in theaters Oct. 21 before streaming Nov. 4 on Amazon Prime Video. While it hadn’t received quite as much attention as Style’s other fall movie, Olivia Wilde’s Venice Film Festival entry “Don’t Worry Darling,” “My Policeman” appeared to be more warmly received in Toronto, drawing praise for Style’s performance.

Styles wore a dark green double-breasted suit and light green trousers, with matching handbag, to the premiere. After the film, he credited Dobson and Corrin for an off-set relationship that allowed trust between the actors, particularly in the film’s most intimate scenes.

“Having a base of a real friendship outside of the characters allows for the friendship scenes, it doesn’t require much acting,” Styles said. “And in the most intense scenes, there’s a lot of trust and a safety there.”