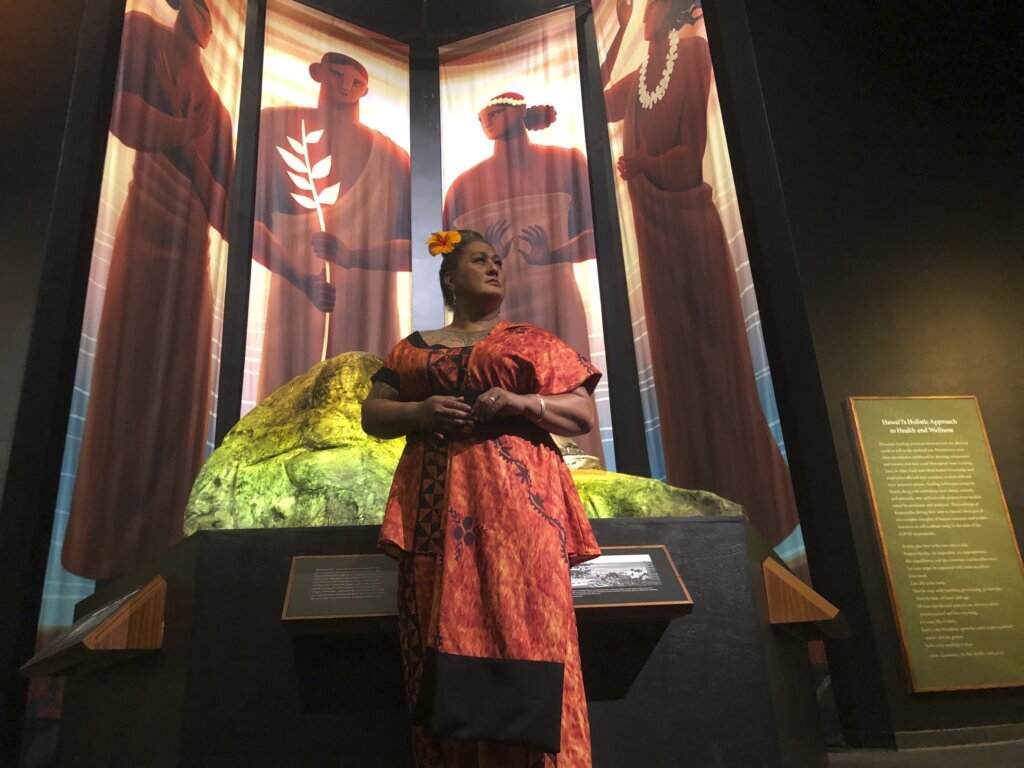 HONOLULU (AP) — More than 500 years ago, Hawaiians placed four boulders on a Waikiki beach to honor visitors from…

HONOLULU (AP) — More than 500 years ago, Hawaiians placed four boulders on a Waikiki beach to honor visitors from the court of Tahiti’s king who had healed the sick. They were “mahu,” which in Hawaiian language and culture refers to someone with dual male and female spirit and a mixture of gender traits.

The stones were neglected for many years, as Christian missionaries and other colonizing Westerners suppressed the role of mahu in Hawaiian society. At one point a bowling alley was built over the boulders.

Officials restored the stones multiple times since the 1960s but informational plaques installed next to them omitted references to mahu.

The stones and the history of the four healers now are featured in an exhibit at Bishop Museum in Honolulu. The display highlights the deep roots of gender fluidity in Polynesia.

Hinaleimoana Wong-Kalu is mahu and one of the exhibit’s curators. She said the healers were revered for their skill and hopes their story will show children in Hawaii that “proper Hawaiian culture” doesn’t pass judgment against those “who have elements of duality.”

“They were respected and honored because the people knew that their male and female duality made them even more powerful a healer,” Wong-Kalu said.

Kapaemahu was the leader of the four healers, and the exhibit is named The Healing Stones of Kapaemahu. Their story was passed down orally, like all Hawaiian stories, until a written language was developed in the 1800s.

But Hawaiians were discouraged from talking about mahu. DeSoto Brown, a Bishop Museum historian and the exhibit’s lead curator, said Christian missionaries who arrived in 1820 forbade anything that deviated from “clearly defined roles and presentation” of male and female genders.

The earliest known written account of the mahu healers is a 1906 manuscript by James Alapuna Harbottle Boyd, the son-in-law of Archibald Cleghorn, who owned the Waikiki property where the stones were at the time. Cleghorn’s wife, Princess Likelike, and daughter, Princess Kaiulani, were known to place seaweed and offer prayers at the stones when they swam.

Boyd’s manuscript “Tradition of the Wizard Stones of Ka-Pae-Mahu” said the Hawaiian people loved the healers for their “tall stature, courteous ways and kindly manners” and their cures became famous across Oahu.

“Their ways and great physique were overshadowed by their low, soft speech, and they became as one with those they came in contact with,” Boyd wrote. “They were unsexed, by nature, and their habits coincided with their womanly seeming, although manly in stature and general bearing.”

When it was time for the healers to leave, four boulders were brought down from Oahu’s Kaimuki area. Two were placed at the site of the healers’ hut and the others where they bathed in the ocean. Idols indicating the dual spirit of the healers were placed under each stone.

Many Hawaiians grew up not knowing about Hawaiian concepts of mahu or the stones because the American businessmen who overthrew the Hawaiian monarchy in 1893 banned Hawaiian language instruction in schools and discouraged speaking it in homes. Generations of Hawaiians lost connections to cultural traditions.

Wong-Kalu, 50, said as a child she was made to believe mahu was a derogatory word. She remembers being among those who would sit on the stones and drape towels over them after swimming, oblivious to their significance.

Mahu are akin to “two-spirit” common in many Native American cultures, Wong-Kalu said, adding there are physical, emotional, mental and spiritual elements to being mahu. The representation of male and female depends on the person, she said.

“In Hawaii, one could exist really in the middle,” she said.

The stones nearly were lost just before the 1941 Japanese attack on Pearl Harbor. At the time, the Honolulu Star-Bulletin reported the boulders would be blasted or removed after a developer leased Cleghorn’s property to build a bowling alley.

Following an outcry, plans emerged for a concrete walkway between the stones. But the developer instead built over them.

The stones were uncovered two decades later when the city tore down buildings to build a public beach park. Elders recalled the story of the stones and urged they remain. The city agreed and created a plaque that mentioned the Tahitian healers but didn’t say anything about them being mahu.

In 1997, the city fenced off the stones and dedicated a new plaque. It also didn’t reference mahu.

During both periods, waves of homophobia and transphobia washed over Honolulu. In the 1960s, a new state law prohibited cross-dressing and police forced drag performers to wear a button saying: “I Am A Boy.” Three decades later, there was backlash in Hawaii and nationally when the Hawaii Supreme Court sided with same-sex couples seeking the right to marry.

The Bishop Museum exhibit, on display through Oct. 16, recounts this history and displays artifacts like massage sticks and a medicine pounder that healers would have used centuries ago. Islander concepts of gender fluidity are explored through stories like that of King Kamehameha III and his male lover.

A map shows terms used in Polynesia for those who don’t identify as male or female, including “fa’afafine” in Samoa and “leiti” in Tonga.

Dean Hamer and Joe Wilson helped curate the exhibit and hope it will spur the city to tell the full story of the mahu at the site of the stones.

Ian Scheuring, spokesperson for Honolulu Mayor Rick Blangiardi, said the city is researching the issue and local leaders plan to meet with members of the LGBTQ and Native Hawaiian communities to learn how they can help tell the “true and complete” story of the healers, he said.

Tatiana Kalaniopua Young, a Native Hawaiian anthropologist, mahu and a director of the Hawaii LGBT Legacy Foundation, said the story the stones and healers helped her family understand that she was not “this weird creature that’s outside of the norm.” And that in a Hawaiian sense, she was part of the norm.

“It gave me a sense of place and purpose as a mahu and it really made me proud to be Kanaka Maoli, or Native Hawaiian,” she said.