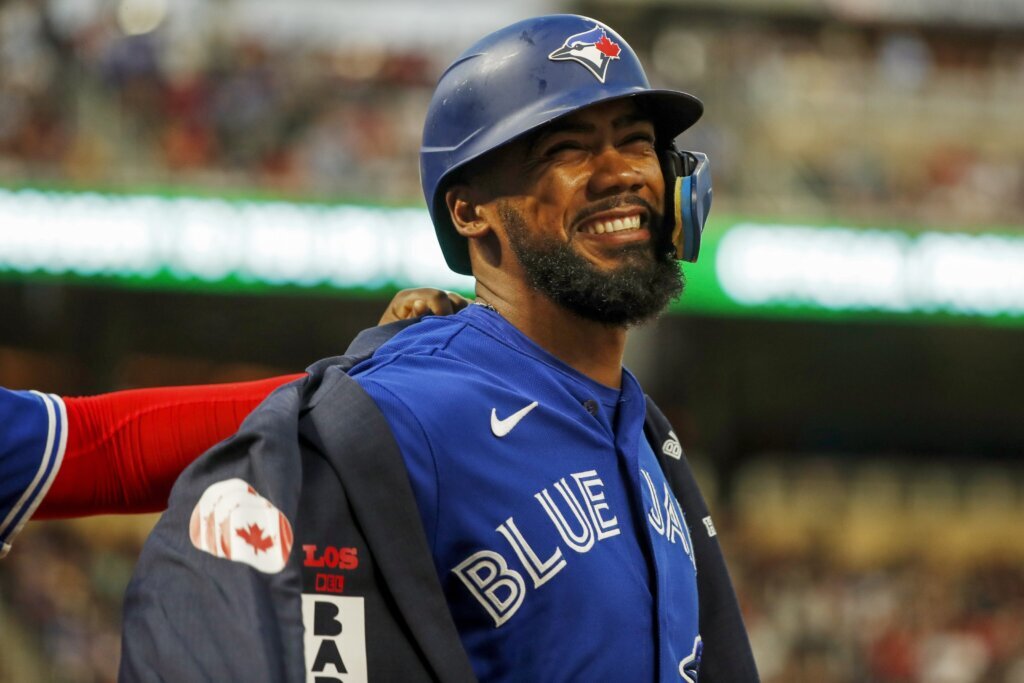 MINNEAPOLIS (AP) — Vladimir Guerrero Jr. hit a three-run homer, Teoscar Hernández homered for the second straight day and the Toronto Blue Jays cruised to a 9-3 win over the Minnesota Twins on Thursday night.

Whit Merrifield, who revealed earlier in the day that he’s now vaccinated against COVID-19 and cleared to play in Canada, had two hits in his Blue Jays debut after being acquired from Kansas City for two minor leaguers at the trade deadline.

Toronto won for the 12th time in 15 games and got six effective innings from Alek Manoah.

Manoah (12-5) allowed two runs on two hits but tied a season high with four walks. The first-time All-Star left his previous start with an elbow contusion. He was hit in the right bicep area by a comebacker in the fourth inning for Minnesota’s first hit but remained in the game.

Twins starter Sonny Gray also had a no-hitter working into the middle innings before Cavan Biggio had a two-out single in the fifth. Gray was done after five innings, giving up just one hit, but he walked a season-high five batters.

Jose Miranda had two RBIs for Minnesota on a hit-by-pitch and groundout. Jake Cave hit his first home run in his third game this season.

Blue Jays: George Springer returned as the designated hitter after missing three games with an elbow injury. Interim manager John Schneider said Springer was “feeling better” and checked off a list of items the team wanted to see before putting him back in the lineup. Schneider said the injury is something the team will likely have to manage the rest of the season.

Twins: OF Kyle Garlick was placed on the 10-day injured list before the game with a right ribcage contusion. Garlick was injured when he collided with the left-field wall in San Diego on July 29. OF Gilberto Celestino was reinstated from the paternity list. … Manager Rocco Baldelli said it’s possible OF Max Kepler (right fifth toe fracture) could return to the lineup over the weekend. … RHP Jorge Alcala had right elbow arthroscopic debridement surgery Wednesday and is expected to be ready for spring training next year.

RHP Tyler Mahle will make his Twins debut Friday after being acquired at the trade deadline from Cincinnati for three prospects. Mahle was 5-7 with a 4.40 ERA in 19 games for the Reds. Toronto counters with former Minnesota RHP José Berríos (8-4, 4.96). Berríos has faced the Twins three times since the 2021 trade deadline deal, including a seven-inning, two-run start this season.

ZIM vs BAN Prediction- Who Will Win Today’s Match Between Zimbabwe And Bangladesh, Bangladesh Tour of Zimbabwe 2022, 1st ODI