How Archives went from ‘National Treasure’ to political prey 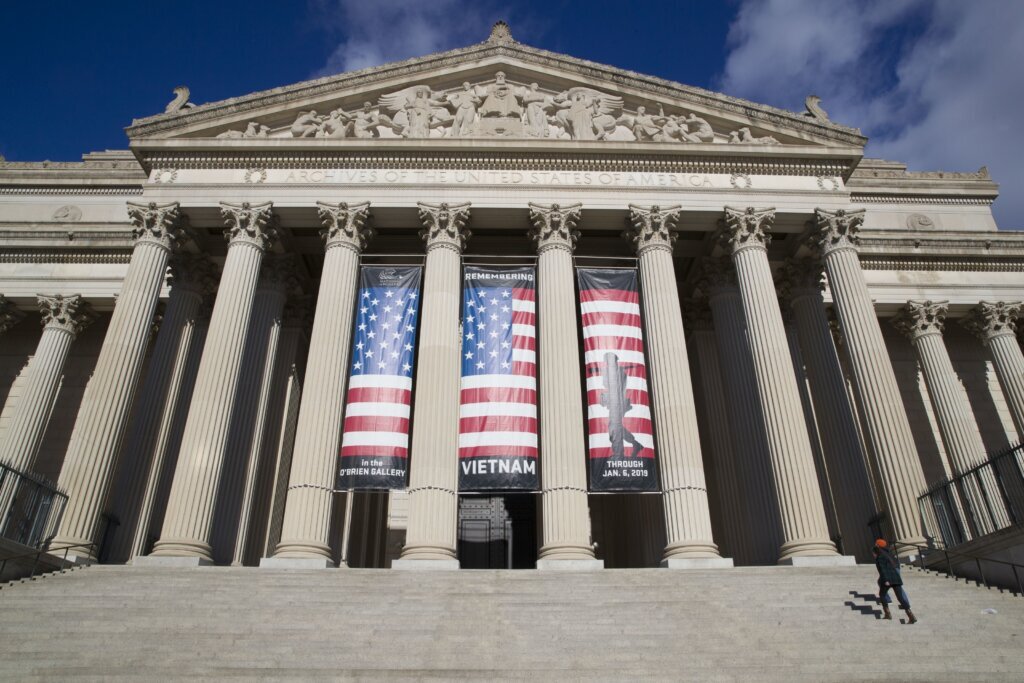 It was the setting for the movie “National Treasure,” and has long been among the most trafficked tourist destinations in the nation’s capital. But what the National Archives and Records Administration has never been — until now — is the locus of a criminal investigation of a former president.

WASHINGTON (AP) — It was the setting for “National Treasure,” the movie in which Nicolas Cage’s character tries to steal the Declaration of Independence. It has long been among the most trafficked tourist destinations in the nation’s capital.

But what the National Archives and Records Administration has never been — until now — is the locus of a criminal investigation of a former president.

Yet that’s exactly where the agency finds itself after sending a referral to the FBI stating that 15 boxes recovered from former President Donald Trump’s Florida in January contained dozens of documents with classified markings.

“I don’t think Donald Trump has politicized the National Archives,” said Tim Naftali, the first director of the Richard Nixon Presidential Library and Museum. “I think what Donald Trump did was cross red lines that civil servants had to respond to.”

Those government workers operate out of the public eye, behind the marble façade of the Archives building in downtown Washington. It’s there, beyond the Hollywood plotlines, where a crucial component of the federal bureaucracy resides, with dozens of employees acting as the custodians of American history, preserving records that range from the mundane to the monumental.

A closer look at the National Archives, its history and how it ended up in the middle of a political maelstrom:

The mission of the National Archives, which was founded by Congress in 1934, sounds straightforward: to be the nation’s record-keeper. It’s a daunting task that has only grown more complex over time.

While the Archives safeguards precious national documents such as the Declaration of Independence, the Constitution and the Bill of Rights, that’s only the public face of their sprawling collection, which spans 13 billion pages of text and 10 million maps, charts and drawings, as well as tens of millions of photographs, films and other records.

In addition to its work in Washington, the Archives oversees 13 presidential libraries and 14 regional archives across the country.

ARCHIVIST FOR A NATION

The Archivist of the United States is responsible for running the agency. The last-Senate confirmed leader was David Ferriero, who stepped down in April after serving 12 years under three presidents.

Ferriero recalled in an April interview with The Washington Post how he watched from the windows of the Archives building on Jan. 6, 2021, as the crowd of Trump supporters marched past on their way to breach the Capitol. He called it the worst day of his life.

More than a year later he decided to retire, in part, because of fears about the nation’s political trajectory.

“It’s important to me, that this administration replace me,” he told the Post. “I’m concerned about what’s going to happen in 2024. I don’t want it left to … the unknowns of the presidential election.”

His deputy, Debra Steidel Wall, is serving as the acting archivist while President Joe Biden’s nominee, Colleen Joy Shogan, awaits a Senate confirmation process this fall. The archivist serves in the role until deciding to retire.

‘NO SUCH THINGS AS MEMENTOS’

The Archives serves as the final resting spot for the work of every White House.

After the Watergate scandal and Nixon’s resignation, Congress passed a law in 1978 to ensure that all presidential records — written, electronic material created by the president, the vice president, or any other member of the executive branch in an official capacity — are preserved and turned over to the Archives at the end of an administration. The law states that a president’s records are not his or her own, but are the property of the federal government and must be treated as such.

When a new administration begins, White House staff receive a brochure on the law and step-by-step instructions on how to preserve records. The preservation requirements cover a wide range of items, including presents and letters from foreign leaders. “There are no such things as mementos,” said Lee White, the executive director of the National Coalition for History.

In addition, the law requires that even while in office, the president or any member of that administration must first seek the advice of the archivist before destroying any record, a practice Trump and his aides reportedly ignored throughout his four years in office.

“Everything he writes down is essentially a presidential record. It’s not his property,” White said. “It is so basic to the whole concept of why the Presidential Records Act was created.”

“At noon on Inauguration Day, the custody transfers to the archivist. Period. There is no maybe. It’s the law,” he added.

The rules of the Presidential Records Act are central to the FBI’s investigation of Trump.

After Trump left office, the Archives discovered that records from his White House were missing. What followed was a yearlong back-and-forth between the Archives’ legal counsel and Trump’s lawyers that resulted in the voluntary return of 15 boxes of presidential records. Upon opening the boxes, the agency discovered that 14 of them contained classified documents and information.

Recognizing a potential crime, the agency made the unprecedented decision to refer the matter to the Justice Department. That move culminated in the search of Trump’s Mar-a-Lago resort in August. FBI agents recovered more than 100 classified records, including some that were stashed in the former president’s office among personal items.

Since the Aug. 8 search, the Archives and its employees have been bombarded with threats and accusations. The acting archivist in an email to the agency’s staff noted their work is nonpartisan and urged them to hold steadfast to their mission.

“The National Archives has been the focus of intense scrutiny for months, this week especially, with many people ascribing political motivation to our actions,” Wall wrote in an Aug. 24 letter. “NARA has received messages from the public accusing us of corruption and conspiring against the former President, or congratulating NARA for ‘bringing him down.’”

“Neither is accurate or welcome,” she added.

Wall has worked for more than three decades at the Archives, starting as an archivist trainee and advancing to second in line. She said in her letter that despite the political storm surrounding the agency, staff must continue their work “without favor or fear, in the service of our democracy.”

Five days before the Mar-a-Lago search, Biden announced he was nominating Shogan, an executive at the White House Historical Association who previously spent a decade working at the Library of Congress, as the next archivist.

Nominees for the post are typically confirmed without controversy or fanfare. But that’s unlikely this time.

Shogan faces a charged confirmation process as Republicans demand answers about the Justice Department’s investigation and the Archives’ role in facilitating it. A confirmation hearing this fall has not yet been scheduled but could end up being unusually contentious.

Republicans in the House and Senate have pushed for more information about how the Archives made the decision to refer Trump’s case to federal investigators.

Rep. James Comer of Kentucky, the top Republican on the House Oversight and Reform Committee, sent a letter Thursday demanding that the Archives’ watchdog provide documents and communications about the case.

“Transparency is particularly important in the post-pandemic era when Americans are lacking trust in our institutions,” Comer wrote.

So far, the National Archives has denied requests from both Democrats and Republicans on the committees that oversee the agency, instead referring them to the Justice Department where the investigation is now unfolding.

More on Donald Trump at https://apnews.com/hub/donald-trump