Hunt for shooting suspect shut down much of fearful Memphis 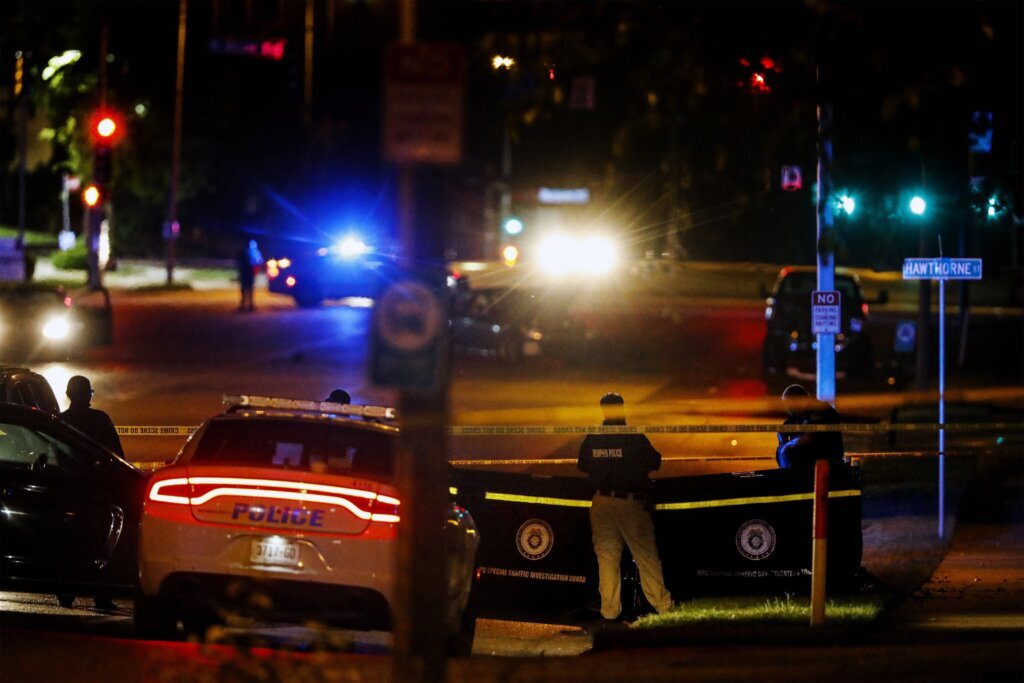 Authorities said the assailant suspected of killing four people and wounding three livestreamed some of the carnage using his cellphone. He was arrested late Wednesday after crashing a stolen car while fleeing police.

The violence unfolded just a few months after 19-year-old Ezekiel Kelly was released early from a three-year prison sentence for a pair of shootings in 2020. Now he’s charged with first-degree murder.

The bloodshed played out as the city was still reeling from the brutal killing of a jogger who was abducted during her early morning run less than a week earlier.

“This has been a horrific week for the city of Memphis,” Police Director Cerelyn “CJ” Davis said.

Authorities offered no explanation Thursday of a possible motive. Nor did they say how Kelly managed to obtain the gun or guns used in the attacks.

The shootings shut down much of the city, and police warned people to shelter in place. The minor-league Memphis Redbirds cleared the field during a game. Friends and relatives frantically called and texted each other, and TV stations cut into regular programming with updates.

Police said the first victim was killed more than 15 hours before the other shootings occurred.

Just before 1 a.m. Wednesday, at least three witnesses saw Kelly fatally shoot Dewayne Tunstall in the head outside a home in east Memphis, according to a police affidavit. It said Kelly pulled Tunstall to the side, then during their conversation drew a handgun and fired several shots.

Marcus Cash, a close friend and business partner of Tunstall’s, came running after he heard the gunshots from his home. One round pierced the window of his child’s bedroom.

When he saw Tunstall’s body, he laid down in anguish beside the man who had been like a brother. Cash said he was so distraught that police held him as a precaution for several hours to give him time to calm down.

Asked what he told police, Cash said: “You all better catch him before I do.”

The second shooting came hours later at about 4:30 p.m. Wednesday, when officers found a man dead from multiple gunshot wounds inside a vehicle, according to police. A woman who had been shot in the leg was discovered minutes later, still alive.

More shootings were reported over the next 4 1/2 hours. During that time, police received a tip at about 6 p.m. that the suspect was livestreaming himself and threatening to hurt people, Davis said.

In one clip from the video, the suspect casually speaks to the camera before opening the door to an AutoZone store and shooting someone inside with what appeared to be a pistol. That man was taken to a hospital in critical condition.

In another, a man narrates himself driving — “green light, green light” — and sings “no faking.” At one point, he fires two rapid bursts of gunfire from the driver’s window. Referring to police, he says he’s going to “go down to the valley, shoot it out with them in the valley.”

Three more shootings and two carjackings followed after police sent an alert warning people to be on the lookout for the suspect.

Police said Kelly killed a woman as he took her SUV, then shot and wounded a man nearby. The final victim, another woman, was found dead about an hour later, just before 9 p.m.

Kelly drove across the state line into neighboring Southaven, Mississippi, where he committed another carjacking at gunpoint but left the driver uninjured, police said.

Officers quickly spotted the stolen Dodge Challenger on Interstate 55. Kelly was arrested after he crashed during a high-speed chase, Davis said. Two guns were found in the vehicle.

It was not immediately known Thursday whether Kelly had an attorney.

One of the gunman’s victims, Allison Parker, was a medical assistant with three children, said Debbie Holland, Parker’s mother-in-law. Holland said her grandchildren now have no parents, since their father died a couple of years ago.

“She was beautiful, intelligent, kindhearted, giving — she would help anybody who asked,” Holland said of Parker. “She didn’t deserve to die at the hands of this monster.”

Facebook parent company Meta said Thursday that it removed the suspect’s livestream before Memphis police sent their initial alert, but the company declined to say for how long the live video was streaming. The company said it also removed the suspect’s Facebook account and has continuously removed content such as copies of the video or messages praising the attack.

Memphis has been shaken by several high-profile killings in recent weeks, including the shooting of a pastor during a daylight carjacking in her driveway, the shooting of an activist during an argument over money and the slaying of jogger Eliza Fletcher following her abduction near the University of Memphis.

Mayor Jim Strickland told reporters he was outraged that Kelly had been released early from prison in March after pleading guilty last year to aggravated assault charges.

“This is no way for us to live, and it is not acceptable,” said Strickland, who later pounded the podium as he demanded accountability. He added: “If Mr. Kelly served his full three-year sentence, he would still be in prison today, and four of our fellow citizens would still be alive.”

In February 2020, Kelly, then 17, was charged as an adult with attempted first-degree murder and other crimes in two shootings committed a few hours apart. Both victims survived but didn’t cooperate with prosecutors, according to court records, and Kelly pleaded guilty to reduced charges of aggravated assault in April 2021.

Kelly was sentenced to three years in prison, but was released in March after serving just over two years behind bars, including credit he received for time he was jailed prior to his plea.

Months before his release, Kelly was denied parole in September 2021. He told the Tennessee Board of Parole that he had an “anger management problem,” according to a recording of his parole hearing, and that he was taking medication to help with nightmares.

The area’s top prosecutor, Shelby County District Attorney Steve Mulroy, is a fellow Democrat who was elected in August after arguing against the sentencing law, saying it drives up prison costs without reducing crime. Mulroy said there was no tension Thursday between him and the mayor.

“Both of us think that all these cases, including the tragic incidents from last night, need to be dealt with strongly,” said Mulroy, who played no role in Kelly’s prior prosecution and sentencing. “The public policy debate can be discussed another day.”