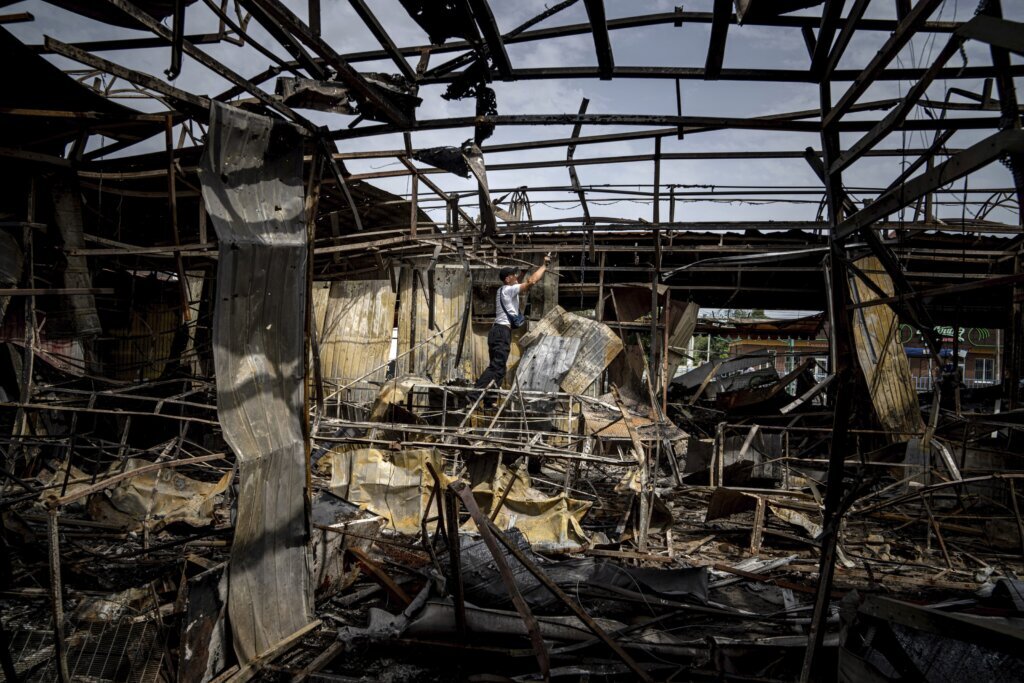 KYIV, Ukraine (AP) — A mission from the U.N.’s International Atomic Energy Agency is expected to visit the Zaporizhzhia nuclear…

KYIV, Ukraine (AP) — A mission from the U.N.’s International Atomic Energy Agency is expected to visit the Zaporizhzhia nuclear power plant next week after it was temporarily knocked offline and more shelling was reported in the area overnight, Ukrainian officials said Friday.

Fire damage to a transmission line at Europe’s largest nuclear plant caused a blackout across the region on Thursday and heightened fears of a catastrophe in a country still haunted by the Chernobyl disaster in 1986.

Lana Zerkal, an adviser to Ukraine’s energy minister, told Ukrainian media on Thursday evening that logistical issues are being worked out for the IAEA team to come to the Zaporizhzhia plant, which has been occupied by Russian forces and run by Ukrainian workers since the early days of the 6-month-old war.

Zerkal accused Russia of trying to sabotage the visit. Ukraine has alleged that Russia is essentially holding the plant hostage, storing weapons there and launching attacks from around it, while Moscow accuses Ukraine of recklessly firing on the facility.

“Despite the fact that the Russians agreed for the mission to travel through the territory of Ukraine, they are now artificially creating all the conditions for the mission not to reach the facility, given the situation around it,” she said, offering no details.

There was no immediate comment from Moscow to the claims. The atomic agency’s head, Rafael Mariano Grossi, also said Thursday he hopes to send a team to the plant within days. Negotiations over how the team would access the plant are complicated but advancing, he said on France-24 television.

Meanwhile, Ukrainian officials said an area close to the plant came under a barrage of shelling overnight, amid mounting concerns that an armed conflict near a working atomic plant could cause more serious damage, even as Zaporizhzhia’s reactors are protected by reinforced concrete containment domes.

Dnipropetrovsk governor Valentyn Reznichenko said shelling in the city of Nikopol, which is across the Dnieper River from the Zaporizhzhia plant, damaged 10 houses, a school and a sanitorium, causing no casualties.

A power line also has been cut, leaving up to 1,000 local residents without electricity, he added. Nikopol has been under nearly constant Russian shelling since July 12, with eight people killed, 850 buildings damaged and over half the population of 100,000 fleeing the city.

On Thursday, the Zaporizhzhia plant was cut off from the electrical grid after fires damaged the last operating regular transmission line, according to Ukraine’s nuclear power agency, Energoatom.

It was not immediately clear whether the damaged line carried outgoing electricity or incoming power, needed for the reactors’ vital cooling systems. A loss of cooling could cause a nuclear meltdown.

As a result of the transmission-line damage, the two reactors still in use out of the plant’s six went offline, Balitsky said, but one was quickly restored, as was electricity to the region.

Many nuclear plants are designed to automatically shut down or at least reduce reactor output in the event of a loss of outgoing transmission lines. The IAEA said Ukraine informed it that the reactors’ emergency protection systems were triggered, and all safety systems remained operational.

The three regular transmission lines at the plant are out of service because of previous war damage. Ukraine cannot simply shut down its nuclear plants during the war because it is heavily reliant on them. Its 15 reactors at four stations provide about half of its electricity.

Follow AP coverage of the war in Ukraine at https://apnews.com/hub/russia-ukraine

Liverpool vs Bournemouth: Get money back as CASH if you lose, plus 113/1 tips, preview and prediction – 18+ T&Cs apply