The 32-year-old Brit suffered his third professional defeat against Oleksandr Usyk last month – a second loss in a row to the Ukrainian.

But undefeated WBC king Fury has not let that deter him from calling out Joshua.

He said: “Yo @anthonyjoshua what you saying big G let’s give the fanz what they want as Usyk is bitching???

“I got the date and venue who will rule Britannia?”

To which Joshua has now responded: “Yea calm. I don’t do the online discussions just for clout, so if your really about it shout @258mgt. 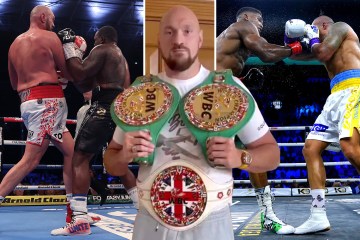 “I’ll be ready in December. Khalas.”

Fury had been tipped to face unified champion Usyk given the Ukrainian’s superb second win over Joshua, but AJ now suddenly appears another option for the Morecambe-based fighter.

Fury and Joshua were set to do battle last year after agreeing a blockbuster two-fight deal in March 2020.

But former WBC heavyweight champ Deontay Wilder scuppered the undisputed bout when he won his arbitration for a trilogy fight with Fury.

Joshua, 32, would go on to face and lose to then WBO mandatory challenger Usyk, before being beaten again in the rematch.

But promoter Eddie Hearn recently revealed the Watford warrior will be back in action in December.

He told The Daily Mail: “We’re all gunning for a December return.

“It’s not confirmed, but that’s where everyone’s minds are at.

“We’re not booking a venue, but the conversations – as recently as yesterday – was December for his return. I don’t want to start mentioning names, but it’s a top 15 fight.

“It will be someone credible, who AJ can come back, express himself against and build on what he’s learning in camp.

“He can then build himself back up to fighting for a heavyweight title again.”