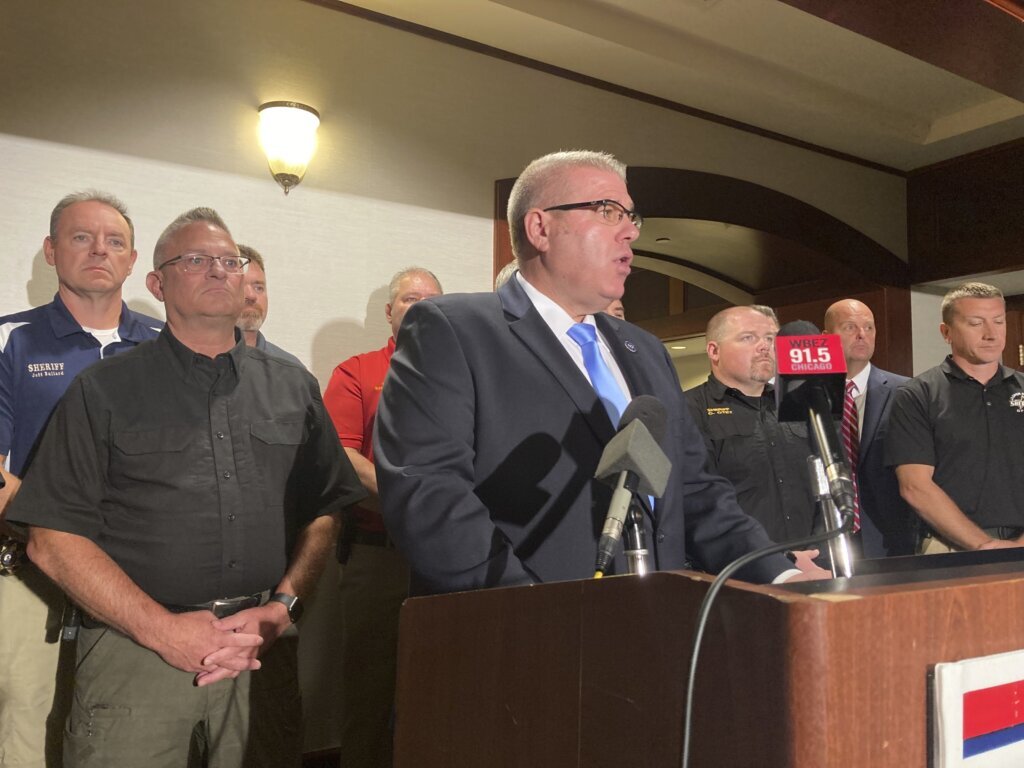 The state senator from Xenia met privately in Springfield with county sheriffs from around Illinois and emerged with criticism for Gov. J.B. Pritzker and the so-called SAFE-T Act approved last year, which starting next year will end bail for many nonviolent crimes that had been dubbed a “penalty on poverty” by critics. He said he would restore capital punishment, abolished in 2011, for people who murder police officers.

The Democratic governor, Chicago Mayor Lori Lightfoot and Cook County State’s Attorney Kim Foxx “are the Three Musketeers of crime, chaos and tragedy in the city of Chicago,” Bailey said.

Bailey has called Chicago an unsafe “hellhole” and in 2019 co-sponsored a House resolution asking Congress to make the city a separate state, a stance he has since abandoned.

“People are afraid. They’re concerned. They’re worried,” Bailey said. “My message would be hold your elected officials accountable. … The people I’m talking to are fed up and they’re … going to rise up and make their voices known.”

Bailey cited statistics he said show crime has increased under Pritzker and largely blamed the SAFE-T Act, which also increases accountability for police officers and tightens use-of-force rules. He acknowledged that key parts of the law, including the elimination of bail, don’t take effect until Jan. 1, 2023. But he said a reluctance on the part of Foxx to prosecute crimes has the same effect and he doesn’t want to see that statewide.

Chicago Police Department statistics indicate that while violent crime is still prevalent in the city, its down from 2021. Police reported 425 homicides as of Aug. 22, down from 519 for the same period last year, and 1,828 shooting incidents, compared to 2,239 during the same period in 2021.

There were 55 shooting victims during the long weekend, 16 fewer than the same time a year ago, but claiming the same number of lives — 11 — according to the Chicago Police Department.

A Foxx spokeswoman did not immediately respond. Pritzker’s campaign spokeswoman, Natalie Edelstein, lambasted the Republican for failing to support pro-police measures in the General Assembly and refusing to criticize violent rioters who attacked the U.S. Capitol on Jan. 6, 2021, in support of former President Donald Trump.

“The only thing his campaign is capable of doing is fear-mongering and playing footsie with insurrectionists,” Edelstein said. “His press conference today was yet another demonstration of the hypocrisy and naivety that should disqualify him from leading our state.”

DeWitt County Sheriff Mike Walker, a Republican, said he supports Bailey and shares his concern about bail. Walker said crime victims will suffer when they learn the suspect in their case can’t be held in jail.

On the other hand, Walker agreed it’s unfair when someone sits behind bars for months for failing to put up a few hundreds dollars to be released. He suggested a system where someone unable to pay bail gets a credit for each day in a cell. The suspect is released when he’s earned credit equal to the bond.

“They’re not staying a long time but they are facing some consequences,” Walker said.