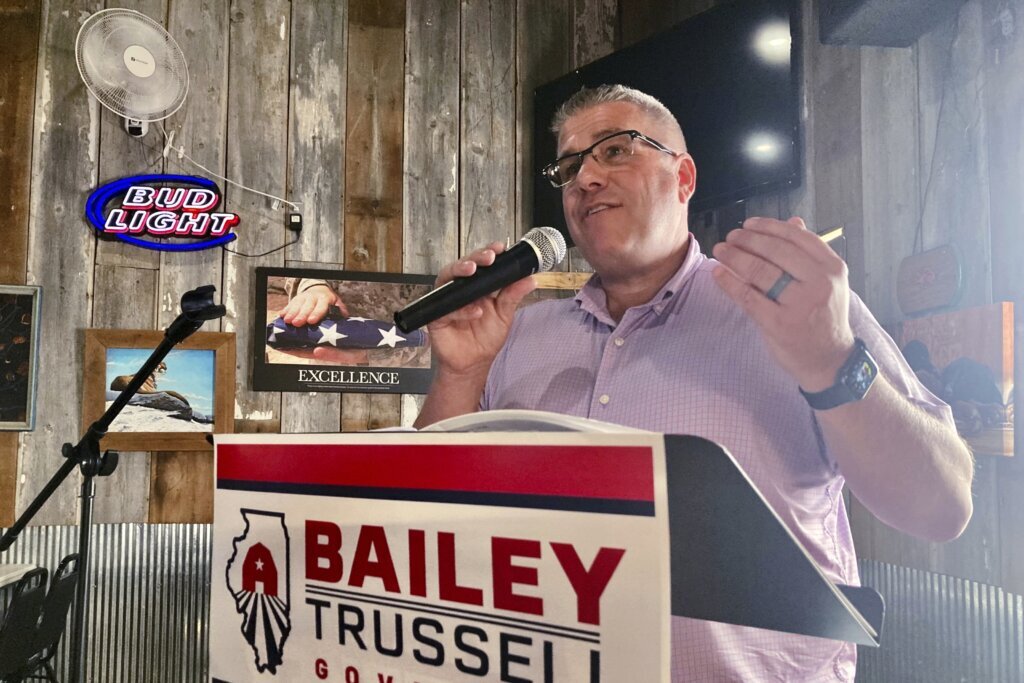 CHICAGO (AP) — Illinois Republicans on Tuesday will choose a nominee to take on Democratic Gov. J.B. Pritzker, a billionaire…

CHICAGO (AP) — Illinois Republicans on Tuesday will choose a nominee to take on Democratic Gov. J.B. Pritzker, a billionaire who has spent millions trying to get the rival he wants and increase his already sizable advantage in the state this fall.

Among the Republican front-runners is conservative state Sen. Darren Bailey, a farmer who received former President Donald Trump’s endorsement Saturday. Bailey raised his statewide profile during the pandemic by opposing Pritzker’s COVID-19 measures. He sued Pritzker over a stay-at-home order the governor issued, and was escorted off the floor of the Legislature for refusing to wear a mask.

Pritzker, an heir to the Hyatt hotel fortune, and the Democratic Governors Association have spent heavily on advertising to help Bailey win the GOP primary, including with ads noting he is “100% pro-life.” While those messages have raised Bailey’s standing with Republican voters, they are likely to hurt him in a general election in a place where Democrats control all statewide offices and voters twice rejected Trump by double digits.

Bailey rejected the idea that he cannot win and criticized “establishment Republicans” for contributing to decades of mismanagement in the state.

“We’re going to send a message to the Republican establishment that we will not be bullied into sacrificing our principles to elect their candidates,” he told a crowd at a campaign stop in rural Illinois this month.

Republican Richard Irvin, a former prosecutor who was the first Black mayor of Illinois’ second-largest city, was seen as a top candidate when he joined the race, with financial backing from billionaire Ken Griffin. But despite Griffin sinking $50 million into Irvin’s campaign, he was damaged by repeated attacks from his rivals, including Pritzker.

Unlike Bailey and his four other rivals, Irvin avoided talking about abortion or saying whether he voted for Trump. The mayor of Aurora instead focused on issues such as crime in Chicago and legislation signed by Pritzker that he said made policing harder. He said he opposes abortion except in cases of rape or incest or to protect the life of the mother.

Irvin also argued that he was the only GOP candidate who could beat Pritzker in November because he could win votes from Republicans, independents and some Democrats.

“The reality is that I am the candidate that can win this race which is why the attacks are coming,” Irvin said while visiting a manufacturing plant.

Pritzker, whose only challenger in the Democratic primary is Beverly Miles, has said he’s not afraid of any rival heading into November.

“I’ll face anybody on the other side of the aisle and we’ll win,” Pritzker said.