LEWIS HAMILTON believes he is finally closing in on achieving his first win of the year ahead of this weekend’s Belgium GP.

Hamilton is currently on the longest winless run of his F1 career – a streak that stretches back to the Saudi GP last December.

But the 37-year-old, who has won at least one race in every year he has competed in F1, is confident of finally breaking his duck in 2022.

Hamilton, who was second in Hungary, said: “We’ve been improving, we’ve had this consistency of the recent races and great progress that the team is making, everyone pulling together and continuing to push.

“The car is becoming more of a racing car, which is not particularly what it was at the start of the year! 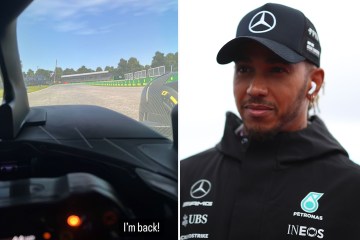 “The last race was the best showing we’ve had so far. That for us was a huge boost, that we can close that gap.

“It’s naturally going to be tough, we’ll keep our heads down.

“The other guys are doing an amazing job but I do believe we can close the gap.”

Hamilton also says he has no plans to quit the sport, despite his soul-searching trip to Africa during the F1 summer break.

“Maybe not that many records, but still a lot of ground to cover with the team.

“I am still deeply in love with the sport.

“And I particularly like the direction and the things that we’re doing within it.

“But of course there’s lots more outside that’s continuing to grow as well. So it’s an exciting time.”

Meanwhile, F1 chiefs are expected to confirm on Friday that Audi will be coming into the sport in 2026.

The German car brand have taken a majority stake in the Sauber team, who are currently badged as Alfa Romeo.

Audi is just one of the car brands owned by the Volkswagen group, with Porsche also expected to forge links with Red Bull.

Labor board files complaint against Starbucks over pay offer