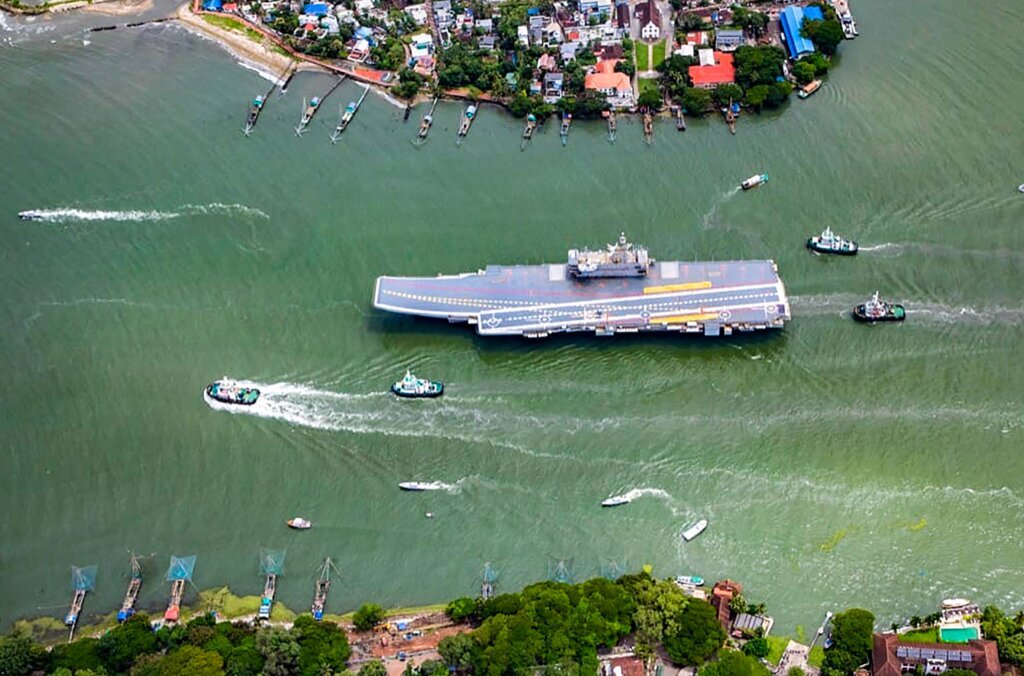 The INS Vikrant, whose name is a Sanskrit word for “powerful” or “courageous,” is India’s second operational aircraft carrier, joining the Soviet-era INS Vikramaditya that it purchased from Russia in 2004 to defend the Indian Ocean and Bay of Bengal.

The new 262-meter (860-foot) carrier, designed by the Indian navy and built at the Cochin shipyard in southern India, was launched by Prime Minister Narendra Modi as part of the country’s commemoration of 75 years of independence from British rule.

More than just adding to the country’s naval capabilities, Modi stressed the importance of India now being only one of a handful of nations with an indigenous carrier program.

The carrier is the largest warship to be built in the country, and can carry a crew of around 1,600 and operate a fleet of 30 aircraft, including fighter jets and helicopters, the navy said.

More than 75% of India’s new aircraft carrier’s components are indigenously procured, with half a dozen major industrial firms and over 100 smaller businesses providing equipment and machinery, according to the Defense Ministry.

A delay of six years caused a six-fold price overrun to 200 billion rupees ($2.5 billion) at present, according to defense experts.

The 47,400-ton warship will be fully operational by the end of 2023 after first undergoing landing trials with India’s Russian-made MiG-29K fighter aircraft.

India plans to equip the carrier with more than two dozen new fighters, with the Rafale-M from France’s Dassault and the F/A-18 Block III Super Hornet built by Boeing currently being considered.

Until then it will rely on the Russian aircraft borrowed from India’s only other carrier, said Rahul Bedi, a defense expert.

In recent years, China has expanded its presence into the Indian Ocean, the Western Pacific and beyond.

In August, it sailed a navy vessel to a Chinese-built port in Sri Lanka despite security concerns from New Delhi about such a port call right off India’s own coast. Beijing called the ship a research vessel, but it was widely believed to be a dual-use spy vessel that India feared could be used to surveil the region.

In response to concerns over China’s growing assertiveness, the Indian navy last year sent four warships to Southeast Asia, the South China Sea and Indo-Pacific for exercises with members of the other “Quad” group of nations — the United States, Japan and Australia, according to India’s Defense Ministry.

Modi said on Friday that security concerns in the Indo-Pacific region and the Indian Ocean have been ignored for too long.

“But, today this area is a big defense priority of the country for us. So, we are working in every direction, from increasing the budget for the navy to increasing its capacity,” he said.

The vast maritime region has been tense because of China’s disputes with its neighbors, including Taiwan, the Philippines, Indonesia, Vietnam, Japan and South Korea. There are competing claims for all or part of the strategically vital waterway that holds significant undersea oil and gas deposits.

China’s People’s Liberation Army Navy, or PLAN, has been modernizing for more than a decade to become more of a “blue water” force — one capable of operating globally rather than being restricted to remaining closer to the Chinese mainland, for which carriers are critical.

The PLAN currently has some 355 ships, including submarines, according to the U.S. Defense Department, which estimates the force will grow to 420 ships by 2025 and 460 ships by 2030.

It possessed two aircraft carriers and in June launched its third believed to be with an electromagnetic system like the United States uses in its new carriers. The Indian carrier uses the traditional “ski jump” type system to launch its aircraft.

India’s older aircraft carrier, the INS Vikramaditya, was built in the Soviet Union in 1987. It served with the Soviet navy under the name Admiral Gorshkov, and later with the Russian navy before it was decommissioned in 1996. India purchased it in 2004 for $2.35 billion.