India opted out of trade talks with a US-led group of Asian nations, again avoiding easing access to its markets via a multi-country deal, while moving ahead with the others in areas including supply chains and clean energy.


The South Asian nation was the only participant in the 14-nation Indo-Pacific Economy Framework that didn’t sign on to the group’s negotiation track on trade, according to statements released after two days of meetings in Los Angeles.


Known as IPEF, the initiative is an effort by President Joe Biden’s administration to deepen ties with Asian nations through a range of issues including trade, climate change, supply chains and taxation. It’s also among US levers to counter China’s rising influence, although US officials have stressed that they aren’t asking partners to choose between Washington and Beijing.


India made a similar move in 2019, when it decided to exit talks on the China-backed the Regional Comprehensive Economic Partnership, the world’s largest regional free-trade agreement that includes nearly a third of global population and gross domestic product.


Prime Minister Narendra Modi said at the time that he pulled out over concerns about how RCEP would affect the livelihoods of Indians, particularly the most vulnerable. 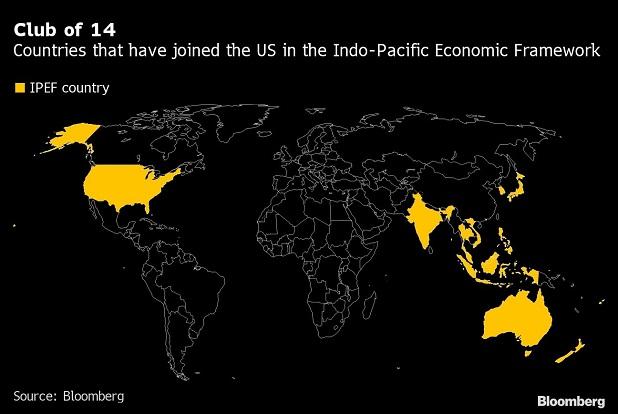 US officials in a briefing Friday said New Delhi’s decision not to join demonstrated the flexibility built in to the IPEF framework, with US Trade Representative Katherine Tai adding that bilateral trade talks will continue between the US and India.


India’s commerce minister, Piyush Goyal, said in a briefing that the benefits to India are still unclear from trade commitments related to issues around the environment, labor and digital trade, and that it wants to avoid any conditions that will harm developing countries. He added that India will stay engaged and “wait for the final contours to be decided before we formally associate with the trade track.”


After launching in May, representatives from IPEF nations met for the first time this week to define their main negotiation tracks. Secretary of Commerce Gina Raimondo, speaking at the same briefing, said that there’s no consensus yet on when IPEF would complete negotiations on its four tracks, or “pillars.”


In addition to trade, those were labeled Friday as supply chains; clean economy, which focuses on the transition to renewable energy and fighting climate change; and fair economy, which includes taxation and corruption issues. All 14 countries signed on to those three.


The countries are working on a “really aggressive timeline,” Raimondo said. In May, a US official said that the Biden administration was aiming to have substantive commitments in about 12 to 18 months. Raimondo added Friday it would be positive to have IPEF pillars agreed to by November 2023, when the US hosts the Asia-Pacific Economic Partnership forum, which promotes free trade.


“There’s such eagerness to get the United States back in the region in a big way,” Deputy US Trade Representative Sarah Bianchi told reporters. “There’s just a view that if we can do an executive agreement that we all sign on to, that it really will be durable and lasting and won’t have to go through some of the more political aspects of our system.”

Review, GMP, valuations: Should you subscribe to Electronics Mart…