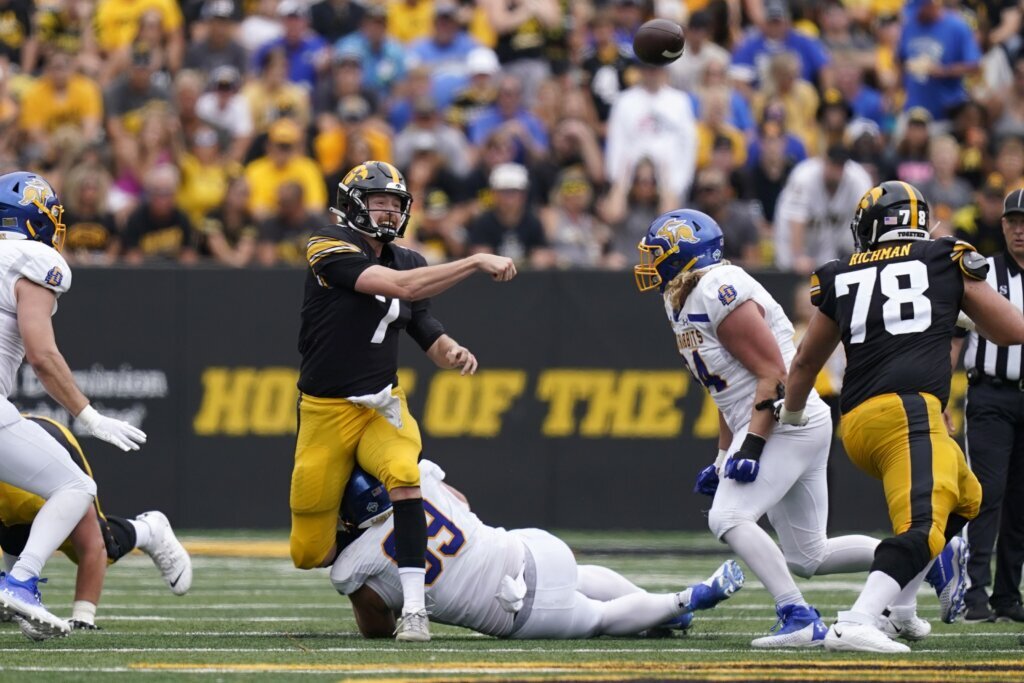 Line: Iowa by 3 1/2, according to FanDuel Sportsbook.

Iowa desperately needs to show offensive improvement. The Hawkeyes escaped South Dakota State at home last week after managing a field goal and getting two safeties in a 7-3 win. Despite calls for change, coach Kirk Ferentz is sticking with Spencer Petras as his starting quarterback. Iowa State is looking to start 2-0 for the first time since 2012 and win at Kinnick Stadium for the first time since 2014.

Iowa offense vs. Iowa State defense. The Hawkeyes managed just 166 yards against South Dakota State of the Championship Subdivision with Petras playing one of the worst games of his career. No one would mistake Iowa for an explosive team, and defense has long been the name of the game in Iowa City. But Petras and the Hawkeyes need to show more or it could be a long season. Iowa must find a way to keep Cyclones sack master Will McDonald IV off Petras.

Iowa State: QB Hunter Dekkers was sensational in his first start, throwing for 293 yards and four touchdowns against FCS foe Southeast Missouri State. Dekkers grew up in northwest Iowa and knows the magnitude of the CyHawk Game. Let’s see what he does in the Kinnick cauldron.

Iowa: Petras has the fans howling over his underwhelming performance in the opener. Two of his best receivers were out with injuries, but going 11 of 25 for 109 yards with an interception isn’t going to cut it. Petras was just 11 of 21 for 106 yards and a TD in last year’s CyHawk Game.

Iowa has won six in a row against the Cyclones. … Kinnick hasn’t been site of the CyHawk Game since 2018. The 2020 game was cancaled because of the pandemic. … Iowa State WR Xavier Hutchinson has had at least one catch in each of his 26 career games. … Cyclones’ 32-point winning margin last week was biggest in an opener since a 45-0 win over Northern Iowa in 2001. … The 120 yards allowed by Iowa last week were the fewest in an opener since the Hawkeyes gave up 110 against Kent State in 2004.

US stocks rise on Wall Street, remain on track for weekly gains