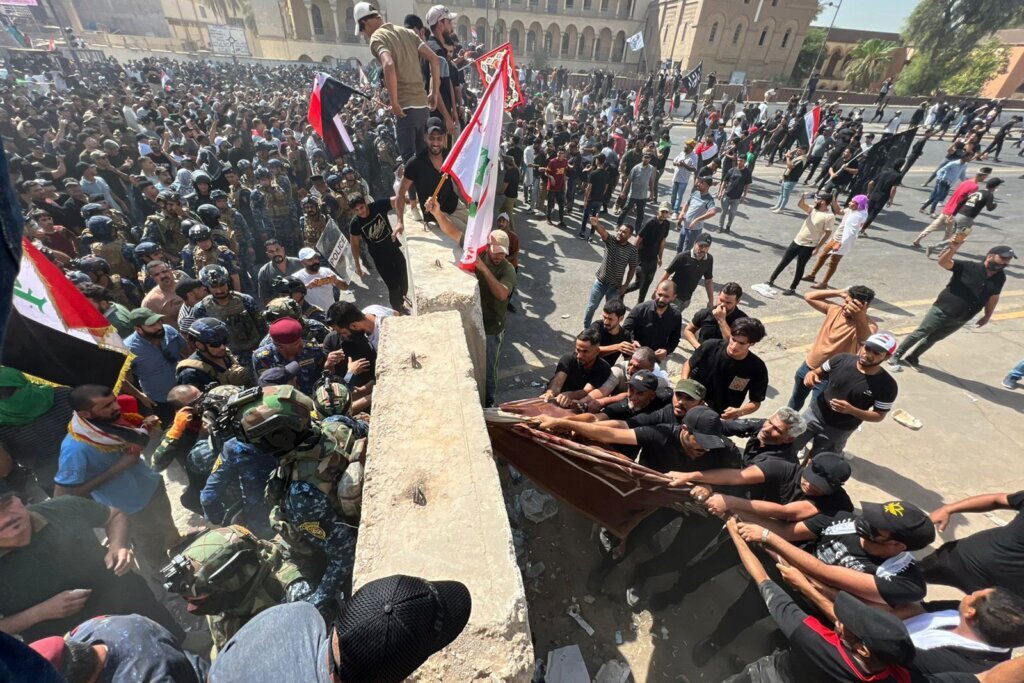 BAGHDAD (AP) — Hundreds of followers of an influential Shiite cleric have breached Iraq’s parliament on Saturday for a second time this week to protest the government formation efforts lead by Iran-backed groups.

Iraqi security forces used tear gas and sound bombs to try to repel the demonstrators. An expected parliament session did not take place and there were no lawmakers in the hall.

THIS IS A BREAKING NEWS UPDATE.

Iraqi security forces hurled gas canisters and used sound bombs to disperse the thousands of Iraqi demonstrators, the followers of an influential cleric, in the heavily fortified government zone of the capital on Saturday.

One by one, demonstrators used ropes to pull down cement barricades leading to the gate of Iraq’s Green Zone, which houses official buildings and foreign embassies. They had come to protest the formation of the next government by Iran-backed parties.

Security forces used gas canisters and sound bombs to repel the protesters as they approached the parliament building. Journalists for The Associated Press saw several people injured. A regular parliament session was expected.

“We came today to remove the corrupt political class and prevent them from holding a parliament session, and to prevent the Framework from forming a government,” said Raad Thabet, 41. “We responded to al-Sadr’s call. We will go to the Green (Zone). No matter the cost.”

The protesters are followers of influential Shiite cleric Muqtada al-Sadr, who called for the demonstrations against the formation of the next government by Iran-backed political groups. Al-Sadr’s party exited government formation talks in June, giving his rivals in the Coordination Framework alliance the majority they needed to move forward with the process.

Many protesters wore black to mark the days leading to Ashura, which commemorates the death of Imam Hussein, the grandson of the Prophet Mohamed and one of Shiite Islam’s most important figures. Al-Sadr’s messaging to his followers has used the important day in Shiite Islam to kindle protests.

Al-Sadr has used his large grassroots following as leverage against his rivals.

On Wednesday, hundreds of his followers stormed the parliament building after the Framework alliance named Mohammed al-Sudani as their nominee for the premiership and signaled their readiness to form a government despite his threats.

Inside Tyson Fury’s £1.7million Morecambe mansion with gold curtains and radiators and a red marble kitchen