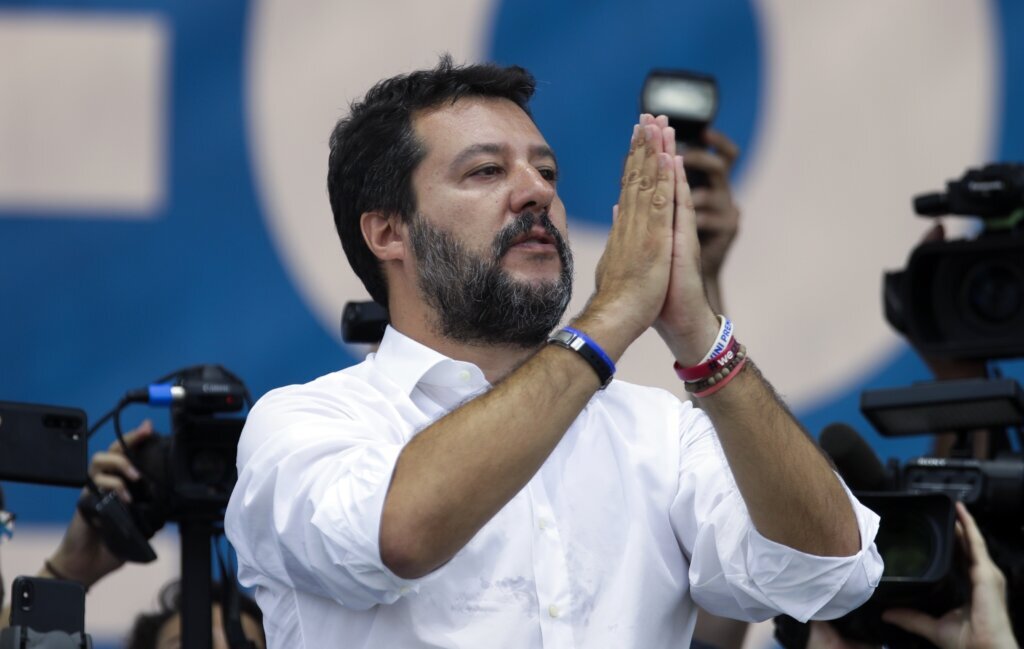 MILAN (AP) — Italy’s firebrand former interior minister, Matteo Salvini, put migration at the center of his electoral campaign during a visit Thursday to Italy’s southernmost island of Lampedusa, a gateway for tens of thousands of people crossing the perilous central Mediterranean Sea to Italian territory each year.

Salvini pledged to move screening centers for people seeking political asylum to northern Africa, in a bid to prevent economic migrants from pouring into Italy. He said just 15% of current arrivals qualify as refugees.

He also voiced concern that a migrant reception center on Lampedusa was nearing collapse due to overcrowding, calling it “unworthy of a civilized country.”

Salvini distinguished between those who qualify for asylum, saying “they cannot be massed on the ground on mattresses in 40-degree heat,″ and those who do not: ”We cannot throw open the doors of Italy to thousands of clandestine migrants who are not fleeing war,″ he said.

Salvini is pledging a return to his tough-on-immigration policies should the right-wing coalition win the Sept. 25 parliamentary vote. The early elections were forced after his right-wing anti-migrant League party, along with two other parties, yanked their support for outgoing Premier Mario Draghi’s 17-month-old pandemic unity government.

During Salvini’s short but dramatic tenure as interior minister in 2018-19, migrant arrivals in Italy dropped sharply as he pursued policies of deterrence, including long government delays in assigning safe ports to rescue ships. He is currently on trial in Sicily, charged with kidnapping in one such case, while the charges were thrown out in another.

“I think in 2018-2019 Italy was a safer country, more protected, more normal, more European,″ Salvini said. ”Lampedusa is the gateway of Europe. It cannot be the refugee camp of Europe.”

While his League led the right-wing coalition in Italy’s 2018 election, it sank in popularity after joining Draghi’s consensus government. It is now lagging badly in the polls behind another right-wing coalition partner, the far-right Brothers of Italy led by Giorgia Meloni.

That leaves Salvini fighting for political relevance. If the right-wing coalition wins the Sept. 25 vote, the leader of the party with the most votes would be tapped as premier to form a new government.

Meloni is seeking to become Italy’s first female premier, but Salvini is not counting himself out.

Not everyone on the island of Lampedusa was keen to be part of Salvini’s electoral rhetoric.

The island’s mayor is worried about the impact on tourism, and insists the current system of transferring migrants to Sicily and beyond was averting the emergency situations experienced during the peak arrival years from 2014 to 2016.

With new arrivals daily from Libya and Tunisia, migrants typically spend less than 24 hours on the island.

“The crucial element is not to slow down or jam the transfer to the mainland,” Mayor Filippo Mannino told The Associated Press on Thursday.

A handful of aid workers and activists held a sit-in in Lampedusa ahead of Salvini’s arrival, displaying banners disputing his depiction of an island swamped by migrants.

“Whoever comes to Lampedusa, doesn’t see migrants. There is no emergency. The only emergency is for the migrants who are at the (migrant center),″ said Luca Casarini, an activist and chief of mission on Mare Jonio Italian rescue ship. He accused Salvini of propaganda to gain votes ”on the skin of people … who die at sea, who are much worse off than us.”

Flavio Di Giacomo, a spokesman with the Italian offices of the International Organization for Migration, said while migrant arrivals are up this year by about one-third over 2021, they are still well below the 120,000 to 180,000 registered annually from 2014-2016.

“These are not emergency numbers. We are not facing a numerical emergency. But we are facing a humanitarian emergency,’’ Di Giacomo said, citing 905 people who have died or gone missing at sea this year.

David Lohmueller in Lampedusa, and Paolo Santalucia in Rome contributed.

Follow all AP stories on global migration issues at https://apnews.com/hub/migration.

Ahead of festive season, lenders have a new worry of sub-9% deposit growth