PIERS MORGAN has hilariously told pal Cristiano Ronaldo now is the time to sign for Arsenal.

The Portuguese ace, 37, has reportedly told Old Trafford chiefs that he wants to leave the club.

And that’s spurred the TalkTV host into sharing a photo of himself presenting Ronaldo with an Arsenal shirt, as Georgina Rodriguez looks on on Twitter.

Morgan captioned the snap, “It’s time @Cristiano#afc” in the ultimate in cheeky tweets.

United legend is said to have asked the United hierarchy to accept any bids for him.

And that will put Chelsea on red alert as they hunt a striker to fill the gap left by Romelu Lukaku’s departure to Inter Milan. 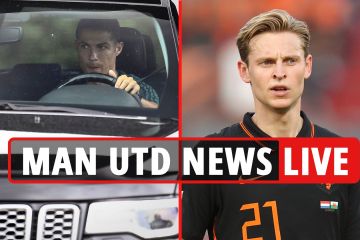 Ron, who is yet to return to Carrington, is unhappy at the prospect of playing a first season in almost two decades without Champions League football.

And he does not believe United’s squad are capable of mounting a title bid.

And he does not believe United’s squad are capable of mounting a title bid.

Back in April, Morgan told talkSPORT: “Do you know what I’d do if I was Arsenal manager? I’d go in, get Cristiano Ronaldo and put him up front.

“I’ve had this conversation with him last week. I said ‘come to Arsenal’.

In the past, Morgan has begged Ronaldo not to score against his beloved Gunners.

New Blues chief Boehly recently met with Ronaldo’s agent – Jorge Mendes – to discuss a host of topics, including a potential move for the sporting icon.

German giants Bayern are also interested in signing the veteran forward, who was a ray of light in an otherwise dismal season for the Red Devils.

Ronaldo was United’s top goalscorer, finding the back of the net 24 times and providing three assists in 39 appearances.

Gauff has an off day, and gets eliminated from Wimbledon