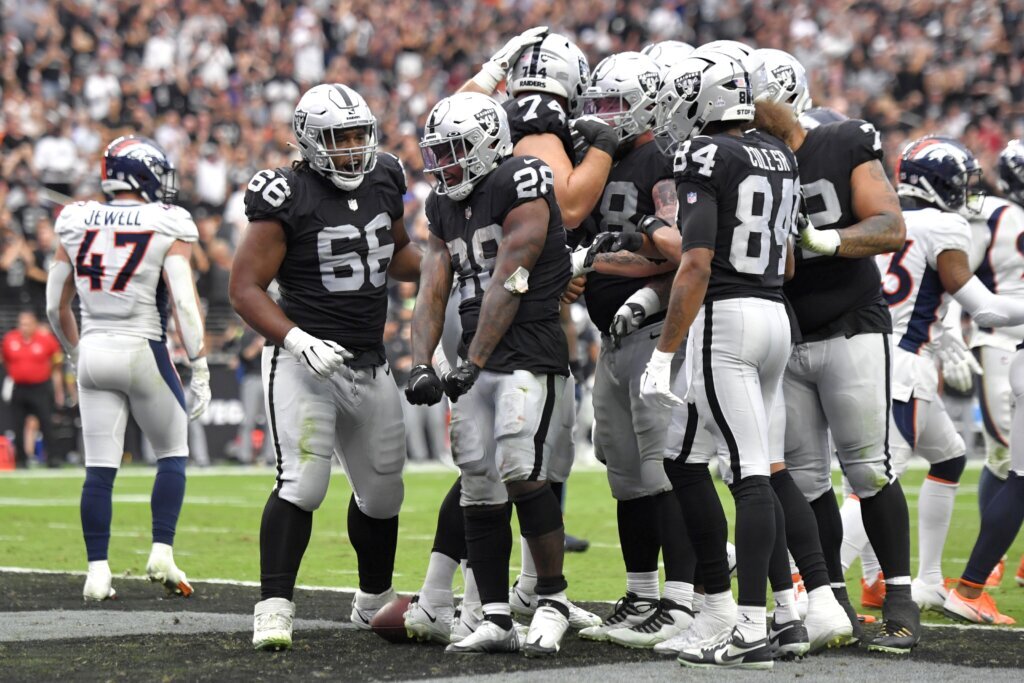 LAS VEGAS (AP) — Josh Jacobs ran for 144 yards and two touchdowns, Amik Robertson returned a fumble 68 yards for a score and the Las Vegas Raiders won their first game of the season, 32-23 over the Denver Broncos on Sunday.

After opening their first season under coach Josh McDaniels by losing three straight one-score games, the Raiders (1-3) managed to do enough on the ground with their biggest rushing game in six years and on defense to hold off Russell Wilson and the Broncos (2-2).

Maxx Crosby had two of Las Vegas’ three sacks, and Robertson had the game-changing play late in the first half as Denver repeatedly failed to take advantage of good field position.

After getting a 5-yard TD pass from Wilson to Courtland Sutton to cap a 34-yard drive in the first quarter, the Broncos turned three other chances with prime field position into one field goal and the fumble by Melvin Gordon III that Robertson returned for the touchdown.

Wilson had his most efficient game of his short tenure in Denver, completing 17 of 25 passes for 237 yards and two TDs. He also ran for a 3-yard TD that cut the Raiders’ lead to 25-23 after completing a 55-yard pass to KJ Hamler.

Jacobs put it away with a 7-yard TD run with 2:01 to play. He became the first Raiders player to rush for at least 130 yards and two TDs in a game since Darren McFadden did it in 2011 against the Jets.

Derek Carr didn’t have to do much for the Raiders, completing 21 of 34 passes for 188 yards as Las Vegas got the running game going for the first time this season. Davante Adams had nine catches for 101 yards.

Jacobs scored on a 10-yard run in the second quarter and set up a field goal in the third with a 42-yard run that was his longest since his rookie season in 2019.

The Raiders finished with 212 yards rushing for their most in a game since getting 218 against the Broncos in 2016.

The Raiders’ defense got into the scoring mode for a change when Duron Harmon forced Gordon’s fumble and Robertson took it to the end zone.

It was the first TD by the Raiders’ defense or special teams since Erik Harris had a pick-6 against the Chargers on Nov. 7, 2019. The 43 regular season games without one was the second longest of the Super Bowl era, trailing only a 49-game streak by the Browns from 1979-82.

It was the Raiders’ first fumble return for a TD since Keith McGill did it in the 2014 finale against Denver.

Both teams had their issues on special teams with Tyron Johnson botching a punt return that backed the Raiders up near their goal line in the first quarter.

Both teams also missed extra points in the second quarter with Daniel Carlson missing his first kick of any kind this season for the Raiders and Denver’s Brandon McManus missing his second in the past two seasons.

Broncos: S P.J. Locke left the game with a concussion on the opening kick. … RB Javonte Williams left with a knee injury on the first play of the second half and didn’t return.

Raiders: LB Denzel Perryman left with a concussion in the first first half.