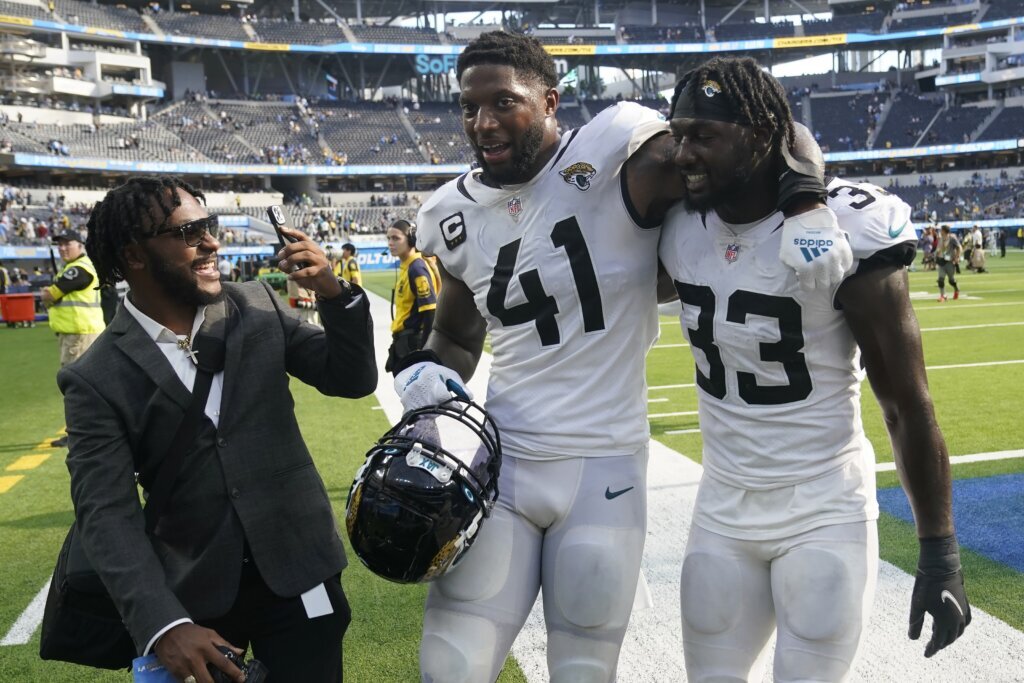 JACKSONVILLE, Fla. (AP) — The Jacksonville Jaguars have their own Defensive Rookie of the Year race ongoing. It’d be tough…

JACKSONVILLE, Fla. (AP) — The Jacksonville Jaguars have their own Defensive Rookie of the Year race ongoing.

It’d be tough to pick a front-runner through three games.

No. 1 overall draft pick Travon Walker, an outside linebacker from national champion Georgia, has been disruptive while playing nearly 85% percent of the team’s defensive snaps. He has eight tackles, including a sack, and got his first interception in his NFL debut.

Inside linebacker Devin Lloyd, the 27th overall selection from Utah, leads the team with 24 tackles and six pass breakups. He has interceptions in back-to-back games.

“I believe some of it can be the fact that they’ve played a lot of football on a big stage in college,” Jaguars coach Doug Pederson said Wednesday. “So it’s not unfamiliar territory to them. But these guys are both just tremendous workers and they prepare so well during the week, practice hard.

“They want to be great players in this league, and that’s what you’re seeing with both of them and it’s paying off in the games.”

Walker and Lloyd have been instrumental in helping the Jaguars (2-1) transform one of the NFL’s worst defenses in 2021 into a formidable force, a unit that could get tested Sunday at Philadelphia (3-0).

Last season, Jacksonville failed to get consistent pressure on opposing quarterbacks, struggled to stop the run and really came up short in the takeaway department.

Now, the Jaguars have 21 quarterback hits and seven sacks. They lead the league in rushing defense, giving up 55 yards a game, and haven’t allowed a rushing touchdown. They already are one shy of last year’s total of nine takeaways, with six interceptions and two fumble recoveries.

There are plenty of reasons for Jacksonville’s turnaround, from the addition of defensive tackle Foley Fatukasi, linebacker Foye Oluokun and coordinator Mike Caldwell to the development of cornerback and second-year pro Tyson Campbell and the play of veterans Josh Allen and Roy Robertson-Harris up front.

But there’s little doubt Walker and Lloyd have been the main catalyst in the team’s improvement.

“Once opportunities come, you can’t miss them, and they haven’t missed a lot of them,” Allen said.

Walker was all over the field in last week’s 38-10 drubbing of the Los Angeles Chargers. He pressured Justin Herbert, chased down running back Austin Ekeler and even looked as smooth as any NFL cornerback while dropping into coverage.

“For a guy that size, man, to be able to move and to drop into coverage is a huge asset for us,” Allen said. “That puts a little different taste in a lot of offenses scheming things up because you got to account for that.”

Lloyd’s success has been more eye-opening because he injured a hamstring during his conditioning test on the first day of training camp and missed the better part of the next month. He returned in time to play in the preseason finale, but there were questions about how quickly he would get back into playing shape and whether he would be in catchup mode early in the season.

It was much ado about nothing. He finished with 11 tackles in the opener and has been even more effective the past two weeks.

“As a head coach now, not just an offensive coordinator, I get a chance to watch all the offensive and defensive guys in the draft,” Eagles coach Nick Sirianni said. “Those are two really exciting guys that I saw and thought the world of, and thought super highly of them. It doesn’t surprise me.”

It doesn’t surprise the Jaguars, either, even though the franchise has more first-round misses than hits in the past decade.

“Those two guys are just super hard workers,” Jaguars quarterback Trevor Lawrence said. “I think they’ve done a good job surrounding themselves with the right people then just really putting their head down and going to work.

“Devin is so rangy. … Just so much range, great in zone, can fly, just that type of athlete with ball skills is special. Then Travon is just a grown man. He can run, great instincts, you saw the play he made in Washington. Both those guys are really good players.”