The long-time rivals went back and forth online as they argued over a late-notice bout at the O2 Arena.

But eventually, KSI settled on a fight next year, at England’s football stadium with the loser receiving NO pay.

He tweeted: “I’m gonna send you a contract.

“We fight next year. Wembley Stadium. Winner of the fight takes all. 100% of the purse will be on the line.

“Put your money where your mouth is and let’s finally end this. Will you accept?” 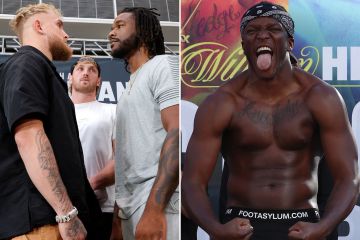 “You have to reply and admit that as of TODAY when it comes to boxing I am betr.”

The Londoner has boxed three times before, firstly against Joe Weller, 26, in 2018, which he won in round three.

That year he drew in another white collar bout with Paul’s brother Logan, 27, but won their rematch in 2019 by split-decision.

KSI is yet to return since, instead focussing on his fledging music career, but does so on August 27.

He was due to face Alex Wassabi, 32, but the American withdrew after suffering a concussion in training.

Paul then offered to step in for FREE after his own comeback bout against Hasim Rahman Jr, 31, was cancelled amid a weight disagreement.

KSI declined and later announced he will fight rapper Swarmz, who has once recorded a song with and has never boxed before.

Paul was set to fight Rahman on August 6 in New York but the heavyweight could not make the contracted 200lb weight limit.

And after it was changed to 205lb, a disagreement between the two broke out, causing the Madison Square Garden event to be axed.

Rahman was due to be Paul’s first opponent with a recognised boxing record.