The latest photos, taken in July by the Webb telescope, show Jupiter’s signature elements, such as northern and southern lights, swirling polar haze, and regions of extreme temperature. The images released by Nasa also capture Jupiter with its rings, tiny satellites and galaxies.


See the images below: 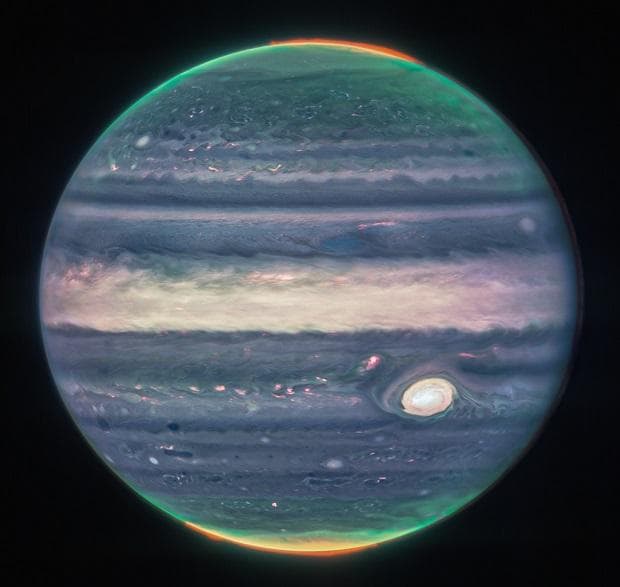 In a statement, planetary astronomer Imke de Pater, of the University of California, Berkeley, said, “We’ve never seen Jupiter like this. It’s all quite incredible.” Pater, who helped lead the observation, added, “We hadn’t really expected it to be this good, to be honest.”


The two images of Jupiter were captured from the observatory’s Near-Infrared Camera (NIRCam), which has three specialised infrared filters that showcase details of the planet.


The infrared images were artificially colored in blue, white, green, yellow, and orange to make the features stand out.


Jupiter’s Great Red Spot, a famous storm so big it could swallow Earth, are white in the images, like other clouds, as they are reflecting a lot of sunlight, Nasa in its release said.


In a wide-field view, Jupiter has been captured with its faint rings, which are a million times fainter than the planet, and two tiny moons called Amalthea and Adrastea. The fuzzy spots in the lower background of Jupiter are likely galaxies “photobombing” this Jovian view, Nasa said.

ENG vs SA: Ben Stokes Reveals His Mental Battle On Dealing With His Father’s Death

Demand for 3-bedroom homes higher than other choices for first time:…

Bail for suspect in police station shooting set at…