JAPAN are looking to complete the job and qualify for the knockout stages after their surprise win over Germany.

The Japanese could have been home and hosed by now, but were stunned by Costa Rica in the second game.

Spain will be heavy favourites to qualify, especially if they show the class that saw them blow away the Costa Ricans in their opener.

A draw against the Germans in their second match means the job is not yet complete.

But it would take a highly improbable sequence of results for Spain to be knocked out.

SunSport takes a look at what to expect from Japan vs Spain including our score prediction.

Japan: Samurai Blue produced one of the shocks of the tournament to beat Germany 2-1 in their opening game.

But a lot of that good work was undone with a shock 1-0 loss to Costa Rica in the second match.

Spain: La Roja hammered Costa Rica 7-0 in their first match to put themselves among the tournament favourites.

However, a 1-1 draw with Germany means there is still a little bit of work to be done. 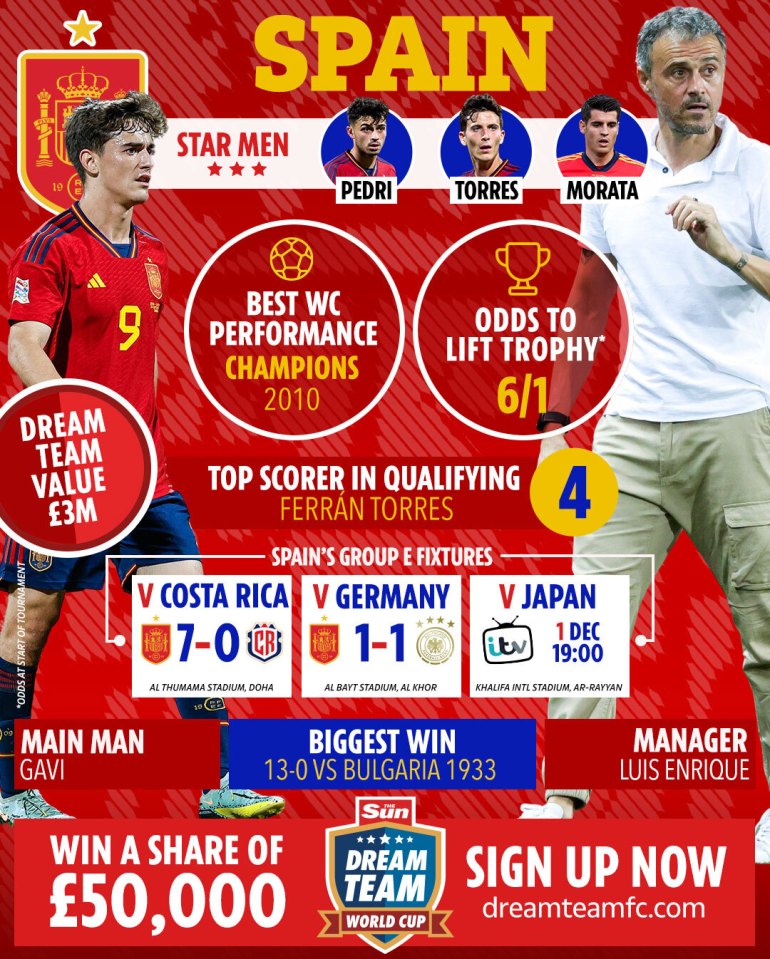 Japan: Arsenal’s Takehiro Tomiyasu is a doubt with a hamstring injury, as is former Marseille right-back Hiroki Sakai.

Spain: Teen sensation Gavi is a doubt after missing training with a minor injury.

Japan: Tomiyasu will be crucial for the Japanese if he is fit.

Spain: If Gavi is out then his Barcelona team-mate Pedri could be the key man.

Japan will qualify if they win.

Should they draw, they need to hope that Costa Rica vs Germany ends in a draw.

Defeat will see Japan eliminated from the competition.

Spain will be through with a point in this one.

If they lose, they will still qualify if Costa Rica fail to beat Germany, unless Germany win with an eight-goal swing.

The sides have met just once, with Spain winning 1-0 in a friendly in Cordoba in 2001.