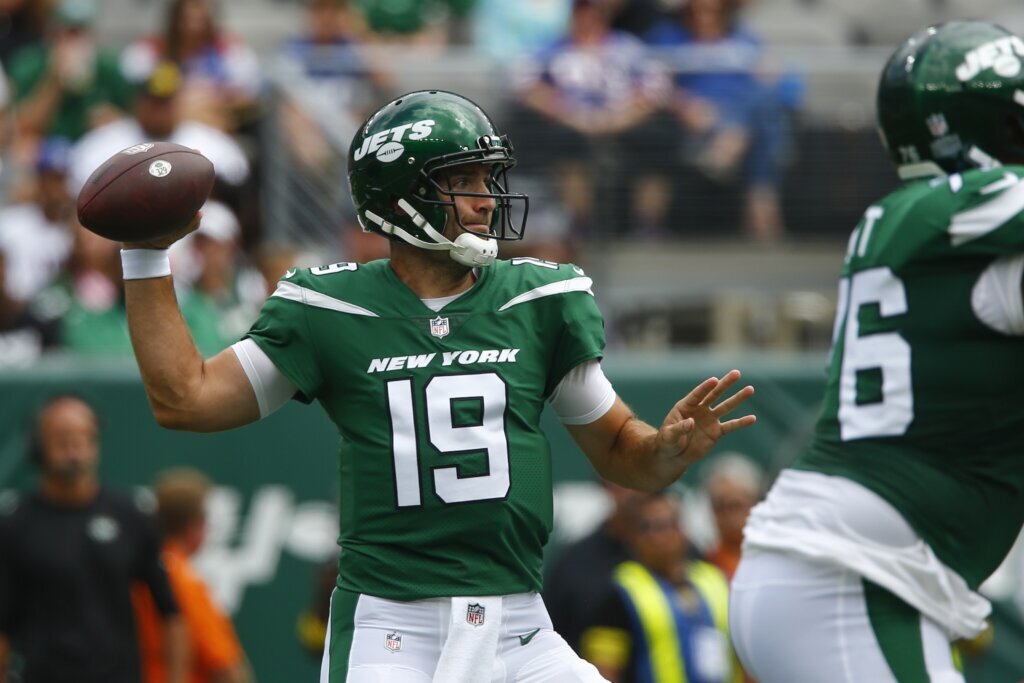 Flacco, likely to open the regular season at quarterback for the injured Zach Wilson, made his preseason debut and finished 7 of 12 for 76 yards and an interception returned for a touchdown by Austin Calitro in his four series.

Jets fourth-stringer Chris Streveler led his third straight fourth-quarter winning drive. He marched the Jets (3-0) down the field in the waning moments and found a wide-open Calvin Jackson Jr. for the go-ahead 5-yard touchdown with 22 seconds left.

Streveler, a former CFL quarterback who had three previous NFL stints, was 10 of 13 for 96 yards and two TDs.

Tyrod Taylor started at quarterback for the Giants (2-1) with starter Daniel Jones watching from the sideline, but was carted from the sideline in the first quarter with a back injury. Taylor completed a 25-yard pass to rookie tight end Daniel Bellinger, but took a big hit from Jets rookie defensive end Micheal Clemons.

Taylor was 2 of 4 for 29 yards and an interception and was replaced by Davis Webb, who led four scoring drives.

The 37-year-old Flacco had a strong training camp, especially since replacing Wilson as the QB1 after the second-year quarterback suffered a bone bruise and torn meniscus in the preseason opener at Philadelphia. Wilson is out a few weeks after having arthroscopic surgery and it’s uncertain if he’ll be ready for Week 1 against Baltimore.

If not, it’ll likely be Flacco, who hadn’t played in the preseason before Sunday — and it looked as much for him and the rest of the starters against the Giants.

The Jets’ first series ended on a fumble by running back Michael Carter. They punted on their second possession and got a 49-yard field goal from Greg Zuerlein on their third.

On the fourth, Flacco rolled right to avoid heavy pressure and made a poor throw to Carter that was easily picked off by Calitro, who returned it 35 yards for a TD to give the Giants a 10-3 lead with 12:18 remaining in the second quarter.

And that was it for Flacco and the starters.

Mike White replaced Flacco and led the Jets on touchdown drives on two of his three possessions to end the first half.

With the Jets trailing 10-3, White threw short to Braxton Berrios, who zipped into the end zone for a 21-yard touchdown to tie it.

White, looking much sharper than he had in the first two preseason games, marched the Jets down the field again and threw a 19-yard strike to Jeff Smith to make it 17-10 with 26 seconds left before halftime.

Webb played the rest of the game after replacing Taylor and finished 30 of 38 for 202 yards and a touchdown.

After Jashaun Corbin’s 1-yard tied it at 17 for the Giants with 9:16 left in the third quarter, Webb put them ahead when he hit Austin Allen for an 18-yard touchdown on the first play of the fourth quarter

It was the second straight solid preseason outing for Webb, who threw two touchdown passes in the fourth quarter against Cincinnati last week.

Denzel Mims, who requested to be traded by the Jets earlier in the week, had a diving 29-yard touchdown catch from Streveler with 7:19 left — possibly raising his value — to tie it at 24.

Mims had seven catches for 102 yards and the score.

Ryan Santoso kicked a 49-yarder field to put the Giants ahead 27-24 with 2:02 left. Santoso was signed earlier this week because regular kicker Graham Gano suffered a concussion last week against the Bengals.

The Giants’ Bellinger and DL Jalyn Holmes were ruled out with concussions after halftime.

Giants: Open the regular season at Tennessee to take on the Titans on Sept. 11.

Jets: Host the Baltimore Ravens in the regular-season opener on Sept. 11.