Ward has been a big part of Palace’s transformation during a rollercoaster decade at Selhurst Park.

And the experienced defender believes the same top–to-bottom philosophy is what will – and must – underpin Manchester United’s bid to bring back the glory days.

Ward joined Palace in 2012 and is the only player to have given the club continuous service all the way from the Championship to the current exciting chapter under Patrick Vieira.

Ward, 32, said: “One thing I love about this place is the culture.

“Now we are in a position where it’s been a big transition period. 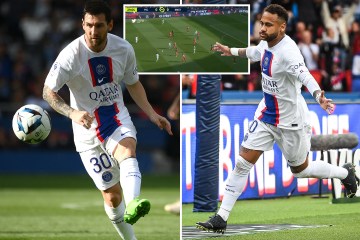 “We’ve changed the style, the philosophy, we’ve changed a lot, but the culture has still remained in many ways.

“The way we go about things, how we do things, the standard, the drive from the chairman right down to the players and staff and everyone that’s involved at the club.

“ We’re all on the same page, we all know what we want, and that’s to improve, set standards and continue to raise the bar.”

Today Palace were due to take on United, who are showing signs under Erik Ten Hag of moving in the right direction – on the pitch at least.

Ward said there was a time when United had an aura, regardless of their form, but added: “I think they are searching for that again and want to get back to that.

“We all know about the Class of ‘92 and the culture and the success they had.

“That comes from – like here – having the top to the bottom all in unison and working together. “That is what, in that case, needs to happen.”

Fan protests against United’s owners, the Glazer family, Glazers have continued despite the upturn in results.

But there is no such unrest at Palace and Ward believes a lot of credit must go to long-standing chairman Steve Parish for the club’s continuity and progress.

Ward said: “Managers have come and gone. The chairman has been huge in the process from start right up until now.

We’re all on the same page, we all know what we want, and that’s to improve, set standards and continue to raise the bar.

“We see him quite a lot. He’s very much involved. He comes down to the training ground, he comes in and sees us after games.

“We as players can speak to him if we need to, we have that kind of rapport. That gives you the sense that everyone is in the trenches together.”

But when most people think of Palace, the first person who comes to mind is Wilfried Zaha – who was with Ward in the promotion-winning squad of 2012/13 before an ill-fated move to United and quick return to Selhust Park.

Ward said: “Wilf is gifted beyond so many people.

“But you also have to look at his work ethic and his commitment and his attitude and the effort that he gives. He leaves nothing out there.

“He’s a fiery character at times as well and I don’t blame him because he gets kicked a lot, and there’s a lot of attention on him.

“For so many years, Wilf has in many ways taken it on his shoulders to be the star man, the main man for us. He’s carried that.

“Coming from the area as well has given so many people the belief they can do it and go on to create a career for themselves.

“He is a poster boy for the club who embodies what Crystal Palace is.”

Ward seems happy to be less in the spotlight and to keep quietly giving his all for the cause – “I will run through a brick wall for whoever I’m playing for and playing with”.  .

Ward’s grounded attitude and commitment owe a lot to his Christian faith and upbringing. Until the age of 12 he and his siblings lived at a bible college in Emsworth where their parents were part of the staff. Until 16, he did not play football on Sundays.

But that didn’t stop Portsmouth giving him a scholarship. He played on loan at Bournemouth in Eddie Howe’s first season as a manager, before leaving Pompey for Palace more than a decade ago.

And it’s worth remembering that, but for Ward’s goal-line clearance in the final minute of extra time in the 2013 Championship Play-Off Final against Watford, Palace might not be where they are now.

Ward said: “That moment was special. I can see it now.

“Names I can’t remember, he’s cut inside and clipped it with the outside of his boot and there was Jules [goalkeeper Speroni], Danny Gabbidon and me on the line.

“All I remember is Gabs looking towards me as I’ve cleared the ball and then it was just get up and get out and get on with the rest of the game.

“To be a part of something which was in many ways a history-defining campaign and breaking records and going on a journey with the club has been a bit of a fairytale.

“It’s been a rollercoaster but in many ways the time I’ve had here has been precious, a real honour.

“There is a real belief within the squad, we have got a great depth to it, a great balance between experience and youth throughout, and I think some of these young lads with the ability they have, it is incredible and exciting.

“I think if they continue to develop, the sky is the limit for this club.”

Uiagalelei leads No. 5 Clemson to 35-12 victory over Furman