UFC hall-of-famer Jon Jones has teased a sensational return to the octagon in December.

The former pound-for-pound king hasn’t set foot inside the cage in nearly THREE YEARS due to a contract dispute with the UFC.

Jones, 35, has been using his time on the sidelines to bulk up in preparation for his long-awaited move up to heavyweight.

And Bones has hinted his hiatus will come to an end at UFC 282 on December 10.

MMA fans were quick to react to Jones’ tweet, with one saying: “Please don’t play with me, Jon.” 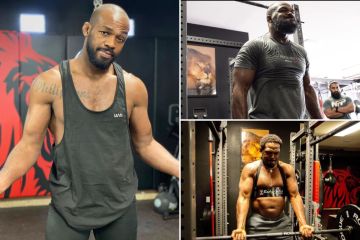 Another said: “The GOAT is back.”

And another said: “The GOAT is coming!”

Another remarked: “Praise be to Odin.”

Jones became the youngest champion in UFC history 11 years ago with a scintillating third-round TKO victory over then-champion Mauricio Rua.

And the consensus greatest MMA fighter of all time plans to replicate that performance when he fights for heavyweight gold.

Jones’ time away from the cage has in part been down to a very public pay row with the UFC brass.

But SunSport revealed in January that his advisor, Richard Schaefer had resumed negotiations with the promotion and made progress in securing a suitable deal for his client.

He said: “He is willing, ready and able to fight whoever we can get for the heavyweight title.”

Jones hasn’t fought since his final defence of the 205lb title against Dominick Reyes at UFC 247 in February 2020.

Bouts with former and current heavyweight champs Stipe Miocic and Francis Ngannou have been mooted for his return.

Jones has undergone a dramatic body transformation in preparation for his heavyweight debut but recently revealed he’s still “bulking” up.

He said: “I personally don’t feel slow, I’m aware that I’m not in camp and I am in a bulking phase.

“But I like people judging that version of me, it could only work to my advantage.”