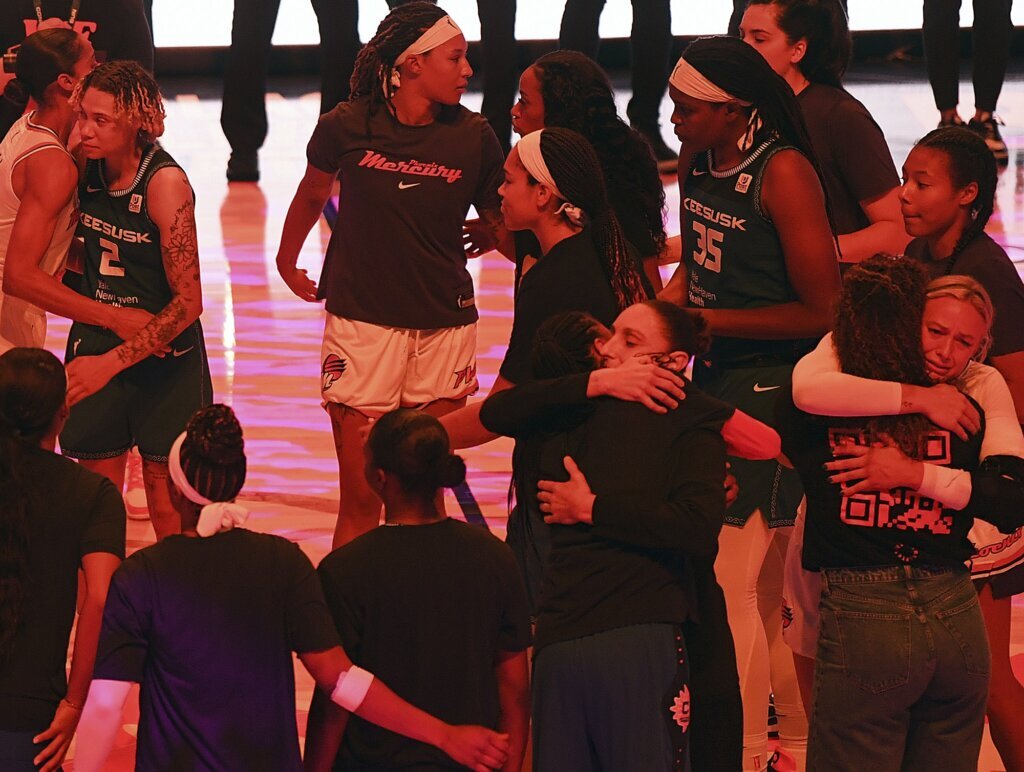 Connecticut started the fourth quarter on an 11-0 run to take control. Phoenix, which was without Diana Taurasi for the first time this season, struggled from the field after halftime, missing 13 consecutive shots to end the third quarter and five straight to start the fourth.

Before the game, players from both teams met at midcourt during a moment of silence for 42 seconds, which is Brittney Griner’s jersey number. Griner, a two-time U.S. Olympic champion and a eight-time all-star with the Mercury, was convicted Thursday in Russia of drug possession and smuggling and was sentenced to nine years behind bars. Connecticut coach Curt Miller wore a “WE ARE BG” t-shirt.

Kelsey Plum sank a 3-pointer with 1:11 left to pull Las Vegas to 80-78 and after a Dallas miss, Chelsea Gray made a jumper from the free-throw line to tie it at 80. Dallas guard Tyasha Harris dribbled down the clock before driving into the lane and finding a wide open McCowan under the basket with 11.4 seconds remaining.

Las Vegas struggled to get into its offense and called a timeout with 3.8 seconds to go. Then Gray found a wide open A’ja Wilson in the paint, but her layup rolled off the rim as time expired.

McCowan finished with 21 points and a season-high 16 rebounds for Dallas (15-16), which was without leading scorer Arike Ogunbowale for a second straight game. Marina Mabrey and Harris each scored 15 points.

Gray made five 3-pointers and scored a season-high 28 points for Las Vegas (22-10), which lost consecutive games for just the third time this season. Jackie Young scored 19 points, Plum had 15 points and seven assists, and Wilson had 12 points and nine rebounds.

Players from Las Vegas and Dallas locked arms before the game to honor Brittney Griner, who was sentenced to nine years in a Russian prison earlier in the day. Griner, a two-time U.S. Olympic champion and a eight-time WNBA all-star, was convicted of drug possession and smuggling.