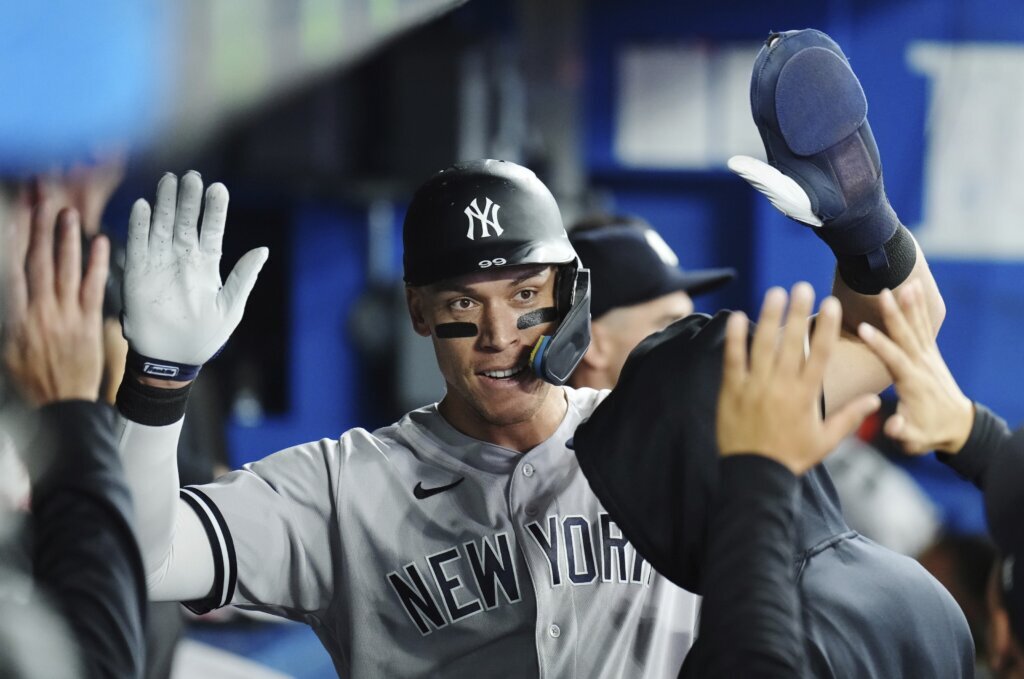 Judge walked four times and stayed at 60 homers, one shy of Roger Maris’ American League record, as the Yankees clinched the division by beating the Toronto Blue Jays 5-2 Tuesday night.

The Yankees won their first division championship since 2019 and 20th overall, tied for second-most with the Dodgers behind Atlanta’s 21. New York (95-59) secured a first-round bye and home-field advantage in the Division Series.

“We knew this was coming, but it’s only step one,” Judge said.

The Yankees marked the clinching with loud, splashy fun in the visiting clubhouse at Rogers Centre, with beer and sparkling wine flowing freely.

“This is a big moment,” Judge said as beer dripped off his backwards cap.

Manager Aaron Boone, who carried a glass of Prosecco to his postgame news conference, certainly agreed.

“We can say we’re the best team in the best division this year, and it wasn’t easy,” Boone said. “We took everyone’s punches. We had some low moments but tonight is to be celebrated. It’s not easy going through the American League East and surviving.”

Judge lined out in his first at-bat and then drew four straight walks in his seventh straight game without a home run. He has walked 11 times in 30 plate appearances since hitting homer No. 60 against Pittsburgh last week.

All five of Judge’s plate appearances went to full counts — he saw 33 pitches, 14 strikes. His longest drought without a home run this year was nine games in mid-August.

“It’s just awesome to see the discipline and the consistency of the at bats while he’s going through this with all the attention around it,” Boone said. “I keep saying he’ll get there, he’ll get it, but to see him rack up quality at-bat after quality at-bat is impressive.”

The Yankees have eight games left in the regular season for Judge to tie or break the AL mark set by Maris in 1961. With the division now secure, however, Boone said he wasn’t sure Judge would play Wednesday.

Judge hasn’t missed a game since Aug. 3 at Seattle, the day before a Yankees off day. New York is off Thursday.

Judge’s batting average stayed at .314 as he went 0 for 1. He leads in all three AL Triple Crown categories.

Toronto (87-68) maintained its place atop the AL wild-card standings, but lost ground to Tampa Bay. The Jays lead the Rays by 1 1/2 games — Tampa Bay holds the tiebreaker.

Gleyber Torres had three hits and drove in three runs.

Lou Trivino came on with runners at first and second and got George Springer to ground into an inning-ending double play on his first pitch.

Trivino wrapped it up in the ninth for his first save with the Yankees, and his 11th in 14 chances.

Kyle Higashioka had three hits and scored twice and Anthony Rizzo had two hits as New York won for the eighth time in nine games.

With Harrison Bader held out of the starting lineup, Judge moved over from right field to center field, and picked up one of two Yankee outfield assists in the sixth.

Bader came on as a defensive replacement in the seventh, shifting Judge to right.

Higashioka and Aaron Hicks chased Berríos with back-to-back doubles in the sixth, making it 4-1. Right-hander Zach Pop came on to face Judge and got ahead 0-2 before eventually issuing an eight-pitch walk, prompting more boos.

Blue Jays right-hander David Phelps got ahead of Judge 1-2 with back-to-back swings and misses in the eighth, but three of the next four pitches were balls.

Springer homered on Taillon’s second pitch of the game, but the Yankees right-hander retired 15 of the next 16 batters.

Springer’s home run was his 24th of the season and the 52nd leadoff homer of his career.

Taillon set down 10 straight following Whit Merrifield’s leadoff single in the third. Springer ended that streak with a one-out single in the sixth.

Bo Bichette followed with a single to center and beat the throw to second base, but was called out after umpire Tripp Gibson ruled Bichette didn’t have his foot on the base while being tagged by shortstop Isiah Kiner-Falefa.

Vladimir Guerrero Jr. followed with an RBI single but was thrown out at second base by left fielder Hicks, meaning Toronto’s rally ended with three straight hits.

Berríos reached 1,000 career strikeouts when he caught Hicks looking to end the third.

Judge walked four times in a game for the second time in his career. He also did it Sept. 4, 2017, at Baltimore.

Toronto Maple Leafs star Auston Matthews threw out the ceremonial first pitch. In April, Matthews became the first American-born player in NHL history to score 60 goals in a season. Along with Maple Leafs teammates Michael Bunting and Mitch Marner, Matthews and Judge posed for a photo outside the Yankees clubhouse before the game.

Yankees: INF DJ LeMahieu (right toe inflammation) could return as soon as Wednesday after hitting and running the bases before the game. “The last couple of days have been encouraging for him,” Boone said. “There’s a chance he could be in play tomorrow. If not, I might push a little more till Friday.” After Thursday’s off day, New York wraps up its home schedule with three against Baltimore.