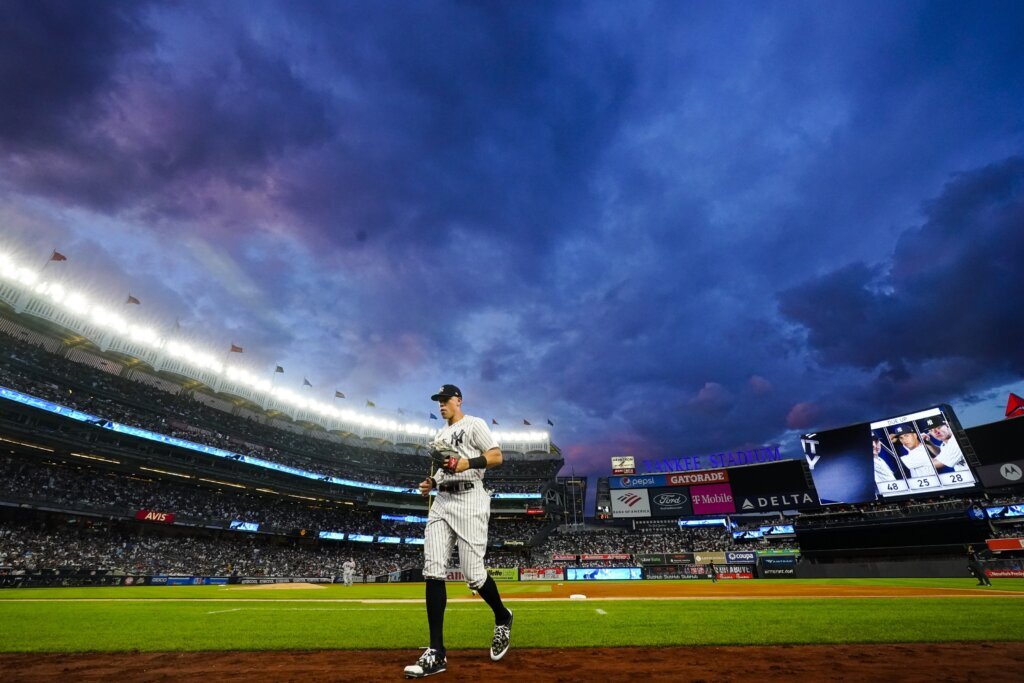 NEW YORK (AP) — If this is what the regular season Subway Series was like, imagine the Yankees and Mets…

NEW YORK (AP) — If this is what the regular season Subway Series was like, imagine the Yankees and Mets meeting in October for baseball’s biggest prize.

“You’d like to think ahead a little bit, because of the pace they’re on and where we’re at, too,” Aaron Judge said, “but we got to get there first.”

Judge hit a 453-foot drive halfway up the bleachers for his major league-leading 48th home run and added an RBI single during a seventh-inning rally, boosting the New York Yankees past the Mets on Tuesday night for their second straight 4-2 win and a two-game sweep.

The Yankees turned a pair of sparkling 6-4-3 double plays, Andrew Benintendi came through with another big hit and rookie right fielder Oswaldo Cabrera made three key contributions. The go-ahead rally was boosted by a fluky popup that dropped for a single, and fans stood for nearly 20 minutes in the ninth inning anticipating the final out.

Francisco Lindor lofted Wandy Peralta’s changeup for a routine fly to center, stranding the bases loaded and ending as scintillating a regular-season game as you’ll see.

“We hope that we do the things it takes to get a chance to hopefully come back to this place,” Mets manager Buck Showalter said.

In a game full of crazy plays that included a pair of retro sacrifice bunts and a run-scoring mental gaffe by Yankees second baseman Gleyber Torres, both teams fed off a boisterous crowd of 49,217, the most at Yankee Stadium in the regular season since the 2013 opener.

Following their summer slide, the Yankees have won three straight games for the only the second time since the All-Star break.

“I think the swagger has always been there. I think it just took a little reminder of who we are and what type of baseball we play,” Judge said. “We got it back.”

Benintendi had his third straight big day at the plate, singling in the go-ahead run for a 3-2 lead in the seventh against Joely Rodríguez (0-3). The hit came after pinch-hitter Jose Trevino’s twisting popup fell just fair next to Pete Alonso down the right-field line.

“It’s a tough long run and also couldn’t get there,” Alonso said.

Judge followed with a two-out run-scoring single against Adam Ottavino for his big league-best 105th RBI.

Frankie Montas had the best of his four starts since the Yankees acquired him from Oakland, allowing two runs and six hits in 5 2/3 innings. Clarke Schmidt (5-2) pitched three shutout innings of three-hit relief in his first big league appearance since July 30 before the Mets loaded the bases with two outs on a pair of walks around Brandon Nimmo’s infield hit.

Peralta threw five straight strikes for his second save.

Judge homered for his fourth straight game against Taijuan Walker and his 10th time in 21 games against the Mets.

Cabrera took a 3-2 splitter for a bases-loaded walk in the two-run fourth for his first big league RBI, then preserved the lead in the fifth when his one-hop throw caught Brett Baty trying to score from second on Starling Marte’s RBI single. Cabrera also singled to start the seventh-inning rally.

Torres sprinted in a vain attempt to catch the trailing runner as Alonso scored the tying run unchallenged in the sixth on Jeff McNeil’s double. Torres also combined with shortstop Isiah Kiner-Falefa for double plays against Tomás Nido in the second and Daniel Vogelbach in the eighth. IKF started the first with a glove flip.

“It was kind of just an instinctive play,” Kiner-Falefa said as the Yankees relaxed ahead of their charter to California. “That was a huge step in the right direction for us.”

Alonso snapped a bat over his left leg after striking out in the fourth. “Just really frustrated at chasing at that pitch,” he said.

Monday’s game drew nearly 1.1 million viewers on television. The game was seen by 617,000 on YES, the second-most for a Subway Series and highest for any Yankees game on the network since Derek Jeter’s finale drew 1.2 million in 2014; 458,000 saw for the Mets’ broadcast on over-the-air WPIX.

Yankees: OF Giancarlo Stanton (left Achilles tendinitis) hit against RHP Luis Severino in a simulated game will be activated before Thursday’s opener at Oakland. OF Estevan Florial was optioned to Triple-A Scranton/Wilkes-Barre. … Severino threw 24 pitches, reaching 95-96 mph. … LHP Zack Britton is to start a minor league rehab assignment with Class A Tampa on Wednesday, another step in his return from Tommy John surgery last Sept. 8. Britton likely will face three batters and throw up to 15 pitches, Boone said. … RHP Domingo Germán was able to run, a day after taking a 104 mph comebacker off his left calf.