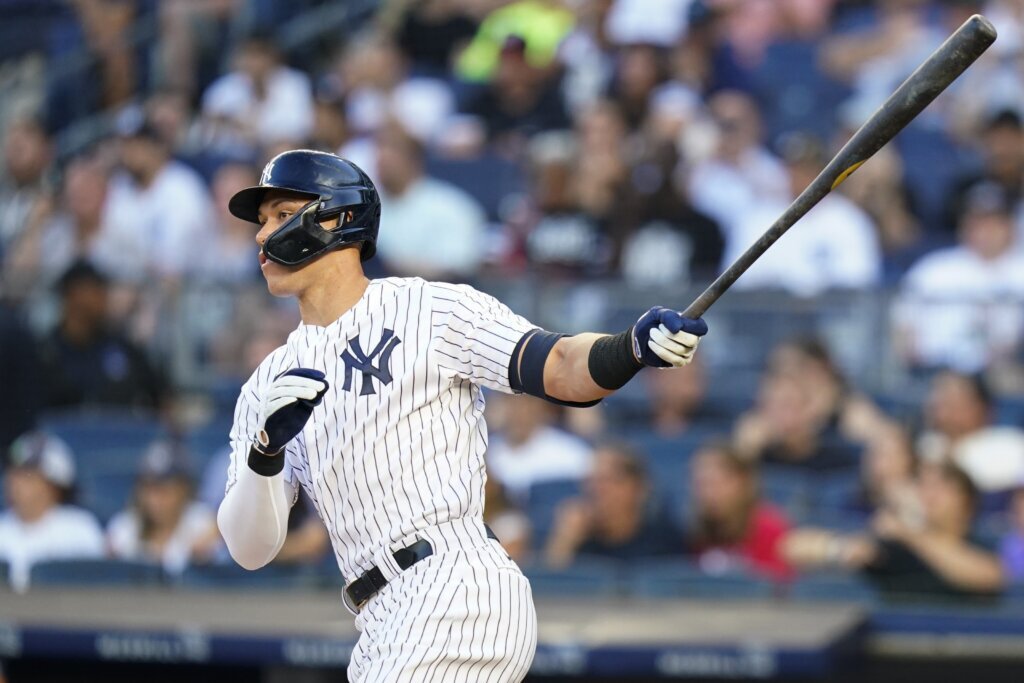 Anthony Rizzo started the onslaught with a three-run homer in the first, and New York clinched its 31st consecutive winning record at home (41-13), second only to its big league standard of 47 in row from 1918-64. The Yankees are 70-34, the first team to reach 70 wins this year.

Before the game, the Yankees acquired starter Frankie Montas and reliever Lou Trivino from Oakland, three days after Seattle obtained Luis Castillo, perhaps the best available starter on the trade market. Castillo is lined up to start the series finale on Wednesday against Yankees ace Gerrit Cole.

Rizzo put the Yankees ahead in the first with a three-run homer off Marco Gonzales (6-11). The drive over the Yankees’ bullpen in right was Rizzo’s fourth homer in six games and raised his season total to 26 along with 65 RBIs.

After Kyle Lewis’ solo homer in the second against Domingo Germán (1-1), Judge hit a two-run drive in the bottom half. Judge also leads the majors with 93 RBIs.

Trevino homered in the fourth and added a drive into Monument Park in the eighth against Ryan Borucki. The first-time All-Star has his nine homers this year, matching his total in four previous big league seasons, and set a career high with 32 RBIs.

Seattle has lost seven of 11 since heading into the All-Star break on a 14-game winning streak.

Adam Frazier hit a run-scoring single in the fourth off Germán, who won for the first time in three starts since coming off the injured list. He allowed two runs and six hits in five innings with three walks and a strikeout.

Eligible for free agency after the World Series. Judge has 10 homers in 12 games since the All-Star break ad 13 in his last 16 games.

Gonzales allowed six runs for the first time since giving up seven on July 3 last year at Texas. He yielded nine hits in 5 1/3 innings and for the second time in three starts matched his career high of three homers allowed.

Seattle traded LHP Anthony Misiewicz to Kansas City for cash. Misiewicz was 0-1 with a 4.61 ERA in 17 appearances before being designated for assignment Sunday. The Mariners also claimed OF Travis Jankowski off waivers from the Mets, who designated him for assignment Friday. Jankowski batted .167 in 43 games with the Mets.

Mariners: 1B Ty France missed a second straight game with a sore left wrist. Manager Servais said France is feeling better but is not ready to swing yet.

Yankees: RHP Luis Severino (right lat) threw for the first time since going on the injured list July 14. Severino was also transferred to the 60-day IL along with RHP Miguel Castro (right shoulder strain). … RHP Clarke Schmidt was optioned to Triple-A Scranton/Wilkes Barre and RHP Carlos Espinal had his contract selected from Scranton.

SpiceJet clears all dues with AAI, to revert to advance payment mechanism