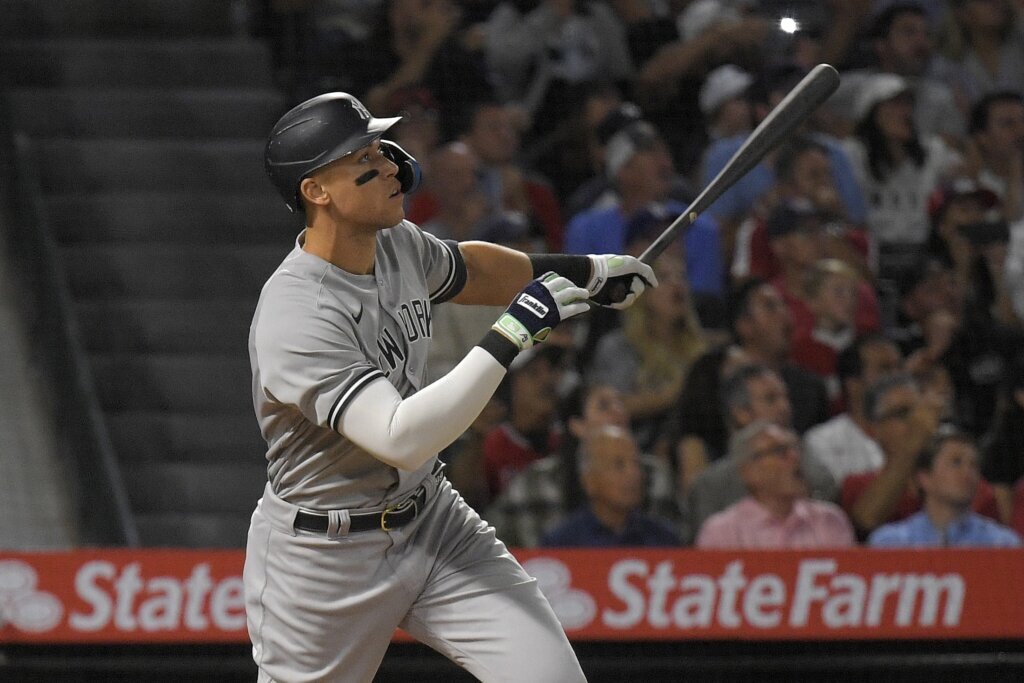 The top two candidates for AL MVP both delivered before a sellout crowd that included plenty of Yankees fans. Ohtani broke a 2-all tie in the fifth inning with his 29th homer, a two-run drive to right-center.

Judge connected in the eighth for a 434-foot shot off reliever Ryan Tepera that made it 4-3.

With his parents in the stands, the California-born slugger became one of 10 players in major league history with multiple 50-homer seasons. Judge smashed 52 long balls in 2017, setting a rookie record that was broken two years later when Pete Alonso hit 53 for the New York Mets.

“It’s just another number,” Judge said. “It’s great, but I’m kind of upset about the loss.”

The first-place Yankees tried to rally in the ninth, but three-time AL MVP Mike Trout went a long way to make a running catch in deep center on a drive by Oswaldo Cabrera with a runner on first for the final out.

Judge, who received loud “MVP!” chants late in the game, was intentionally walked twice before going deep. He is chasing the single-season Yankees record of 61 home runs established by Roger Maris in 1961.

“I’m not downplaying it,” Judge said. “I don’t like talking numbers.”

New York, which leads the AL East by seven games over Tampa Bay, has lost three in a row — all on the road. The Angels, who have struggled mightily most of the season, have won four straight.

Angels starter Jose Suarez (5-6) held the Yankees to two runs and three hits in six innings. Jimmy Herget got two outs for his fourth save.

Frankie Montas (4-11), obtained in a trade with Oakland at the beginning of the month, allowed three home runs in the loss. He gave up four earned runs and eight hits in six innings.

Luis Rengifo and ex-Yankee Mike Ford homered for the Angels along with Ohtani, the two-way star who won last year’s AL MVP award.

Rizzo, dropped to sixth in the batting order, hit a solo shot to right field to give the Yankees a 2-1 lead in the fourth.

The lead didn’t last long as Ford homered in the bottom half to tie it. It was his first of the season.

Ford was signed by the Yankees as an undrafted free agent in 2012 and made his major league debut with the team in 2019.

Rengifo went deep in the second to give the Angels a 1-0 lead. It was his career-best 11th home run of the season.

DJ LeMahieu used a sacrifice bunt — his first since 2019 — to bring in Isiah Kiner-Falefa with the tying run in the third. Kiner-Falefa drew a walk to start the inning.

Yankees: RHP Clay Holmes was reinstated from the injured list after recovering from back spasms. He entered with a runner on in the seventh and got three straight outs in his first appearance since Aug. 12. … LHP Nestor Cortes (groin) will throw a bullpen Wednesday and could throw again this weekend at the team’s training facility in Tampa, Florida.

Angels: RHP Michael Lorenzen (right shoulder strain) said he feels 100% after a 70-pitch rehab start but might have another one. … INF Matt Duffy (lower back) was reinstated from the injured list.

New York placed INF/OF Marwin Gonzalez on the paternity list and recalled OF Tim Locastro from Triple-A Scranton/Wilkes-Barre. RHP Luke Bard was optioned to Triple-A after Sunday’s game in Oakland.