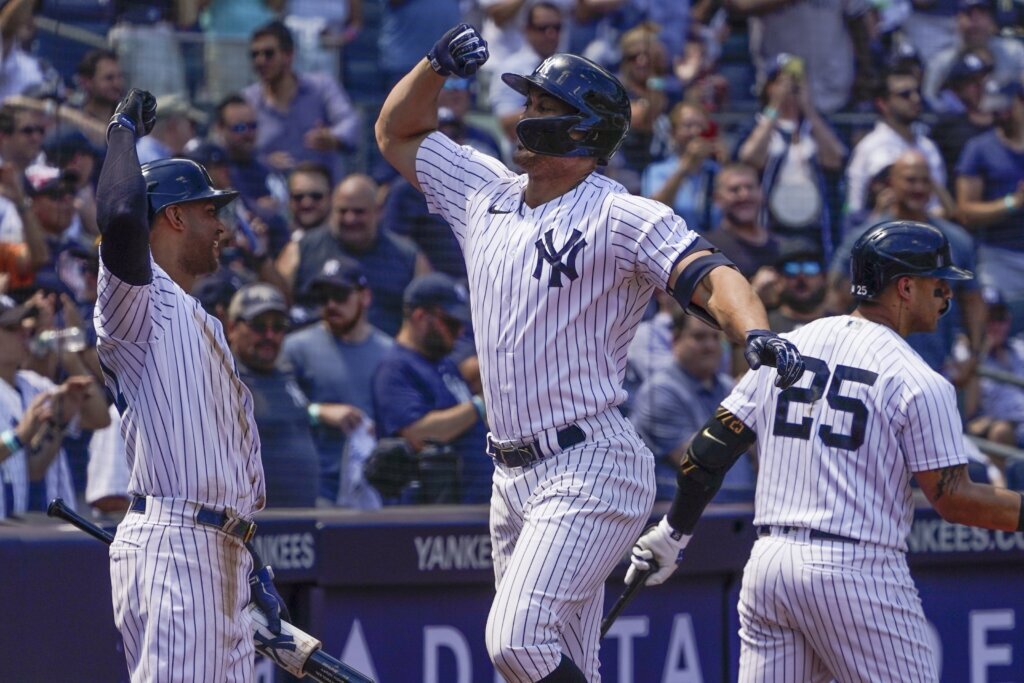 The Yankees completed a three-game sweep of baseball’s worst team and improved to 56-20, matching the 2001 Mariners and 1998 Yankees for baseball’s best 76-game start since 1930.

Taillon gave up three runs in the first inning, but Judge countered with a two-run drive in the first and Stanton hit a three-run homer in the third against Cole Irvin.

The Yankees are 25-1 when Judge and Stanton homer in the same game, including 9-0 this season.

Taillon (9-1) grinded through five innings, and Clay Holmes pitched the ninth for his 14th save to end a seven-game homestand. Next, New York starts a season-high 11-day, 10-game trip with one game in Houston — a quirk of the sport’s reconfigured schedule after a lockout delayed opening day.

Judge’s homer was his major league-leading 29th, and his past five have come with New York either trailing or tied.

Stanton reached for Irvin’s changeup off the outside edge of the plate and swatted it over the right-field wall. It was Stanton’s 19th homer of the season, with five in his past six games.

The Yankees have 57 homers in June, surpassing the 2016 Orioles and 2019 Braves for most ever in the month.

Taillon struggled against a lineup that didn’t include any player with a batting average higher than .234. Seth Brown’s one-out double sparked a three-run first inning, which included a two-run double by Stephen Piscotty and a run-scoring single by Elvis Andrus.

Taillon labored after that, too, but didn’t give up any more runs. He stranded six runners over his final four innings, including the bases loaded in the second. He allowed seven hits, struck out six and walked two.

Taillon also drudged through his previous start, allowing six runs over 5 2/3 innings against Houston in a game New York came back to win 7-6. The past two outings have spiked Taillon’s ERA from 2.70 to 3.32.

Athletics: 2B Jed Lowrie was out of the lineup with an achy left shoulder, and Oakland hasn’t ruled out a potential move to the injured list.

Yankees: LHP Aroldis Chapman (left Achilles tendinitis) could be activated Thursday, but Friday is more likely. He last pitched for the Yankees on May 22. … RHP Ryan Weber was selected from Triple-A Scranton/Wilkes-Barre. … 2B Gleyber Torres was back in the lineup after getting a cortisone injection in his right wrist Monday.

Athletics: RHP Adrian Martinez will be recalled from Triple-A to start in Seattle on Thursday night. Martinez pitched 5 1/3 scoreless innings against Detroit on May 10 in his only career major league appearance.

Yankees: Play at Houston on Thursday before starting a series in Cleveland on Friday. RHP Luis Severino (4-2, 3.38 ERA) will face Astros RHP Luis Garcia (5-5, 3.68 ERA) in a de facto rubber match after the teams split a four-game series in the Bronx last weekend.

Man City season ticket is best value for money in Premier League – but can you guess who came bottom?