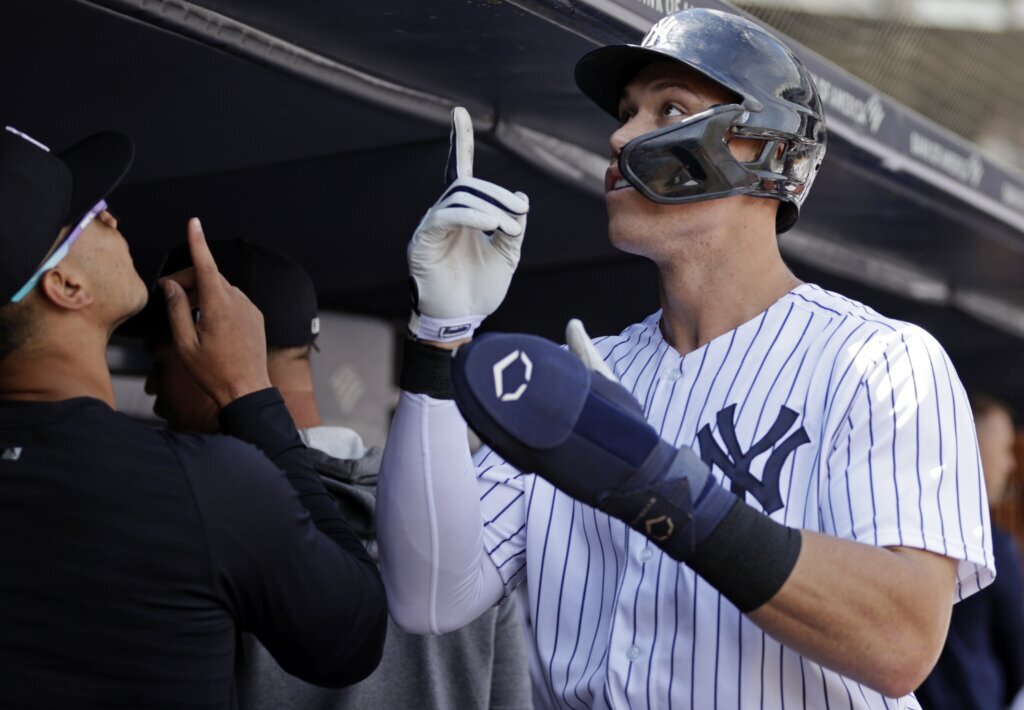 Josh Donaldson homered early and Giancarlo Stanton connected late off a lob pitch as both players returned to the lineup and helped the AL East-leading Yankees move to 4 1/2 games ahead of Tampa Bay. New York also clinched the season head-to-head tiebreaker over the Rays should the teams finish even atop the division.

Judge, leading the majors with 55 home runs, hit three singles in raising his average to .307. He is the first Yankees player to reach base at least three times in seven straight games since Mickey Mantle in June 1957.

The Yankees opened a game with seven straight hits — all singles — for the first time since starting a 15-3 win over Baltimore with eight hits in a row on Sept. 25, 1990. New York hit six singles on the first 21 pitches from Kluber (10-8).

Donaldson came back from the paternity list and hit an RBI single that bounced off the top of the fence in the first. After flipping his bat on the single, Donaldson homered in the second. He had missed four games following the birth of his daughter.

Stanton hit his 25th home run, connecting on a 47 mph lob from catcher Christian Bethancourt in the eighth. Stanton had been limited to pinch-hitting appearances in the previous two games since fouling a ball off his left foot in the sixth on Monday.

Stanton’s homer was his first extra-base hit in 55 at-bats since he homered and won the MVP award in the All-Star Game on July 19. He had missed a month with Achilles tendinitis since then.

New York starter Jameson Taillon (13-4) gave up three runs and six hits in 7 1/3 innings and got his 50th career win.

Judge led off the first with a single as the Yankees broke loose from the start. Rookie Oswaldo Cabrera hit a two-run single and scored on a grounder by Kyle Higashioka on New York’s first out of the game.

Wander Franco hit an RBI single and Harold Ramírez added a two-run single as Tampa Bay lost for the second time in 11 games.

The Yankees opened a 1-0 lead on Torres’ single and Donaldson followed with a single that bounced off the top of the right field wall and was upheld via review for a 2-0 lead.

Cabrera’s hit to right field extended the lead to 4-0 and following a single by Miguel Andújar, the Yankees took a 5-0 lead on Higashioka’s groundout and Judge added an RBI single.

Donaldson hit his 13th homer in the second. He stumbled home in the seventh on a wild pitch by Calvin Faucher.

Rays: LHP Shane McClanahan (left shoulder impingement) may throw a light session Sunday and is on track to return from the injured list when eligible next Thursday.

The Rays did not announce a starter for Sunday. RHP Domingo Germán (2-3, 3.27 ERA) is expected to start Sunday for the Yankees on four days’ rest.

Troy Deeney: Bellingham should snub Liverpool to be a…