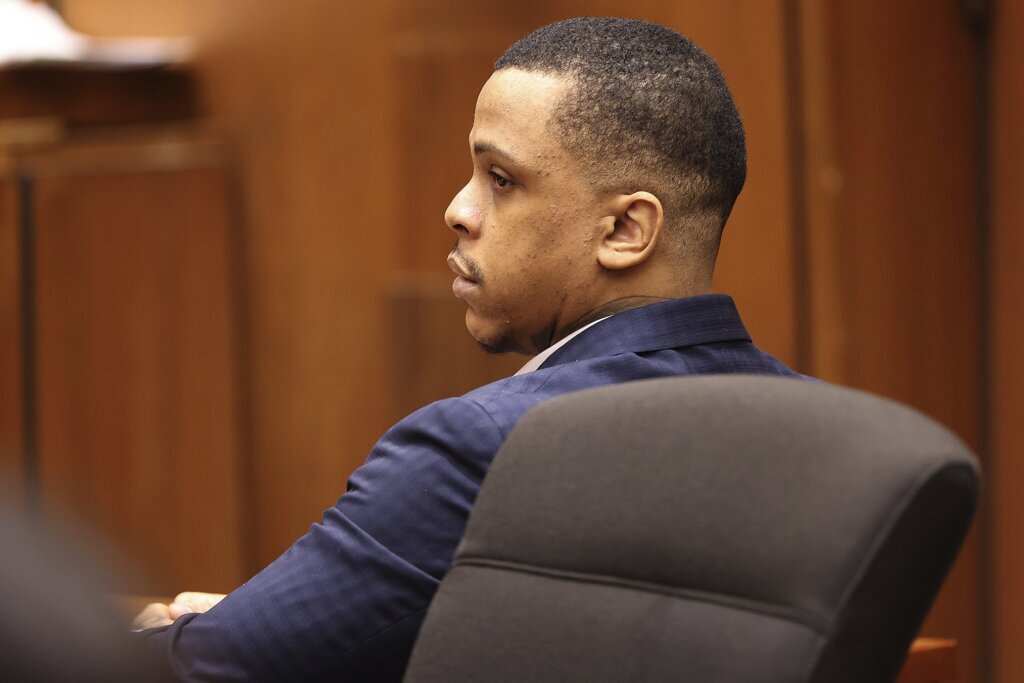 LOS ANGELES (AP) — A 32-year-old man who grew up on the same streets in the same gang as Nipsey Hussle was found guilty Wednesday of first-degree murder in the 2019 shooting of the Grammy-winning rapper, who rose above his circumstances to become an inspiration to the neighborhood where he was eventually gunned down.

Holder, wearing a blue suit and face mask, stood up in the small court room next to his lawyer as the verdict was read. He had no visible reaction. His lawyer conceded during the trial that Holder shot Hussle, 33, whose legal name is Ermias Asghedom, but had sought a lesser verdict of voluntary manslaughter.

“I am deeply disappointment in the First Degree Murder verdict,” Holder’s attorney, Deputy Public Defender Aaron Jansen, said in an email. “It was always going to be tough given the high profile circumstances surrounding the case.”

Jansen added that he and Holder were grateful that the jury agreed that the attempted murder counts were overcharged. They plan to appeal the murder conviction, he said.

A jury of nine women and three men deliberated for about six hours over two days before reaching the verdict. Most of their deliberations took place Friday, and they promptly came to their unanimous decision Wednesday, briefly reconvening after a four-day break. A pair of typos on the verdict form discovered as the results were read forced jurors to briefly return to deliberations before the outcome could be made official, but they had no bearing on the outcome.

“We are both proud and I am a little relieved that the verdict came in a complete, absolute agreement with the charges that Eric Holder murdered Ermias Asghedom in cold blood,” Deputy District Attorney John McKinney said outside the courtroom. “We hope that today is a day in which the Asghedom family and the friends and fans of Nipsey Hussle around the world will find some measure of closure.”

No relatives of Hussle were in the room when the verdict was read, nor did any attend the trial.

The judge has a wide range of options when he sentences Holder on Sept. 15. The first-degree murder charge alone carries a sentence of 25 years to life in prison.

The verdict brings an end to a legal saga that has lasted more than three years and a trial that was often delayed because of the pandemic.

Hussle and Holder had known each other for years growing up as members of the Rollin’ 60s in South Los Angeles when a chance meeting outside the clothing store the rapper opened in his neighborhood led to the shooting, and his death.

The evidence against Holder was overwhelming, from eyewitnesses to surveillance cameras from local businesses that captured his arrival, the shooting and his departure.

The shooting followed a conversation the two men had about rumors that Holder had been acting as an informant for authorities. Jansen argued that being publicly accused of being a “snitch” by a person as prominent as Hussle brought on a “heat of passion” in Holder that made him not guilty of first-degree murder.

Hussle’s close friend Herman “Cowboy” Douglas, who was standing next to him when he was shot and testified at the trial, said the conversation he heard does not explain the killing for him.

“It feels good to get some closure, but I still need to know why,” Douglas said after the verdict.

After years of grinding that won him underground acclaim — his nickname was both a play on the name of comedian Nipsey Russell and a nod to the hustle the future hip-hop star showed in making music and selling CDs — Hussle had just released his major-label debut album and earned his first Grammy nomination when he was killed.

He was a widely beloved figure in Los Angeles, especially in the South LA area where he grew up and remained after gaining fame, buying property and opening businesses.

A year after his death, Hussle was mourned at a memorial at the arena then known as Staples Center, and celebrated in a performance at the Grammy Awards that included DJ Khaled and John Legend.

It was more than two years after that when the man who shot him would go on trial.

“Today was really about Nipsey Hussle and the legacy that he leaves behind,” McKinney said Wednesday. “This verdict and the story of his life will be talked about for sure at Crenshaw and Slauson, but the meaning of it will carry far beyond those streets.”