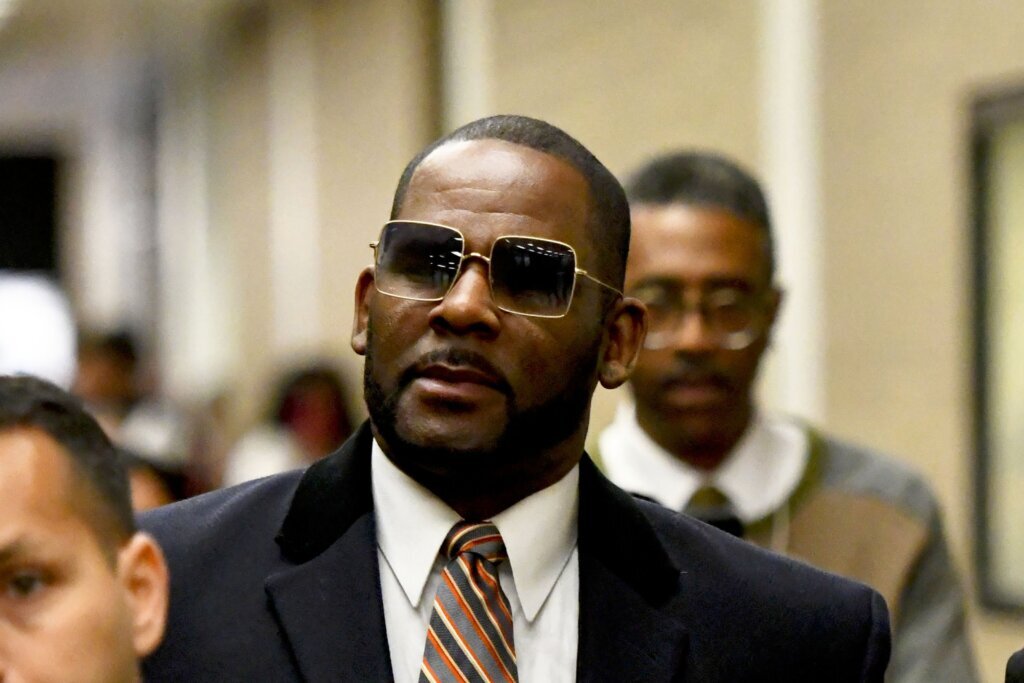 Standing at a podium a few feet in front of jurors, Kelly attorney Jennifer Bonjean told jurors in her closing earlier Tuesday that key government witnesses were admitted liars who testified with immunity to ensure they couldn’t be charged.

At times sounding indignant and raising her voice, Bonjean likened their testimony and other evidence to a cockroach and the government’s case to a bowl of soup.

If a cockroach falls into soup, she said, “you don’t just pull out the cockroach and eat the rest of the soup. You throw out the whole soup,” said told jurors. She said of the prosecution’s case: “There are just too many cockroaches.”

As Bonjean spoke, Kelly, wearing a gray suit and black mask, looked calm at a nearby defense table. As a prosecutor spoke later and repeatedly looked toward Kelly, he often averted his eyes. Later, when the prosecutor described him abusing minors, he shook his head.

Jurors withdrew to start deliberating early Tuesday afternoon, heading home without reaching a verdict several hours later. They were set to pick up where they left off Wednesday morning.

Kelly, 55, was sentenced in June to 30 years in prison during a separate federal trial in New York where he was convicted of racketeering and sex trafficking. Convictions on just a few of the 13 counts Kelly faces at his current trial could add years to his imprisonment.

“When you are in the quiet of the jury room, consider the evidence in light of who is at the center of this case. Kelly’s victims: Jane, Nia, Pauline, Tracy and Brittany,” Appenteng said, referring to five Kelly accusers named in charging documents by their pseudonyms or first names.

Four of them testified. Brittany did not.

The prosecutor also pointed to testimony that as Kelly’s fame boomed in the mid-1990s, his staff and associates increasingly geared everything they did to what Kelly wanted.

“And ladies and gentlemen, what R. Kelly wanted was to have sex with young girls,” she said.

Earlier, Bonjean implored jurors not to withdraw to the jury room with an impression of Kelly informed by media coverage of him in recent years or by prosecutors at the trial.

“They throw around labels like sex predator,” she said about prosecutors. “Labels and sweeping generalizations are distractions meant for you to lose your humanity for this man.”

She described Kelly as a flawed genius who was functionally illiterate since childhood and was ill-equipped to navigate his celebrity and fortune. She said having been abused as a child also deeply affected him.

Bonjean said some witnesses who testified with immunity hadn’t come to the courthouse in Chicago, Kelly’s hometown, to tell the unvarnished truth.

“They came in here to tell the government’s version of the truth,” she said.

Among others, Bonjean cited Kelly ex-girlfriend Lisa Van Allen, who testified about how she stole a sex tape from a Kelly gym bag in the early 2000s. She also pointed to former Kelly merchandizing agent Charles Freeman, who testified that he asked Kelly for $1 million in exchange for returning another, potentially incriminating, video. Both testified with immunity.

During her closing Monday, prosecutor Elizabeth Pozolo told jurors that weeks of evidence proved the singer parlayed his fame to sexually abuse minors and record the abuse on video. She described Kelly as a secret sexual predator.

“Robert Kelly abused many girls over many years,” Pozolo said, referring to Kelly’s full name. “He committed horrible crimes against children. … All these years later, the hidden side of Robert Kelly has come out.”

Bonjean twice called for a mistrial Monday, complaining that closing arguments by attorneys for Kelly co-defendants Derrell McDavid and Milton Brown were grounded in the presumption that “the world now knows Mr. Kelly is a sex predator.”

“The presumption of innocence has been abolished for him,” she said. Judge Harry Leinenweber denied the requests.

Known for his smash hit “I Believe I Can Fly” and for sex-infused songs such as “Bump n’ Grind,” Kelly sold millions of albums even after allegations of sexual misconduct began circulating in the 1990s. Widespread outrage emerged after the #MeToo reckoning and the 2019 Lifetime docuseries “Surviving R. Kelly.”

Pozolo focused much of her closing argument on the government’s star witness, an accuser who went by “Jane” and who said Kelly sexually abused her hundreds of times starting when she was 14.

“He performed degrading acts upon her for his own sick pleasure,” Pozolo said.

She reminded jurors of graphic video footage they had watched, which Jane testified depicted Kelly, at around age 30, abusing her when she was 14. The videos shown included one at the heart Kelly’s 2008 trial. Jurors said later they had no choice but to acquit Kelly because Jane didn’t testify.

Before the 2008 trial, Pozolo said, Kelly and his associates scrambled to recover multiple sex videos that had gone missing from a collection he often carried around in a large gym bag.

By doing so, she said, Kelly associates sought “to cover up the fact that … R. Kelly, the R&B superstar, is actually a sexual predator.”

In his closing, an attorney for McDavid said prosecutors had to show that his client actually knew about any abuse of Jane by Kelly in the 2000s — not just that it was likely he knew.

“Did they prove he knew … behind a reasonable doubt?” Beau Brindley asked. “They did not.”

Pozolo balked at the idea that McDavid had no inkling in the 2000s that the abuse allegations might be credible after helping to recover missing recordings and handing bags of cash to people who returned videos McDavid knew could destroy Kelly.

Follow Michael Tarm on Twitter at https://twitter.com/mtarm and find AP’s full coverage of the R. Kelly trial at https://apnews.com/hub/r-kelly