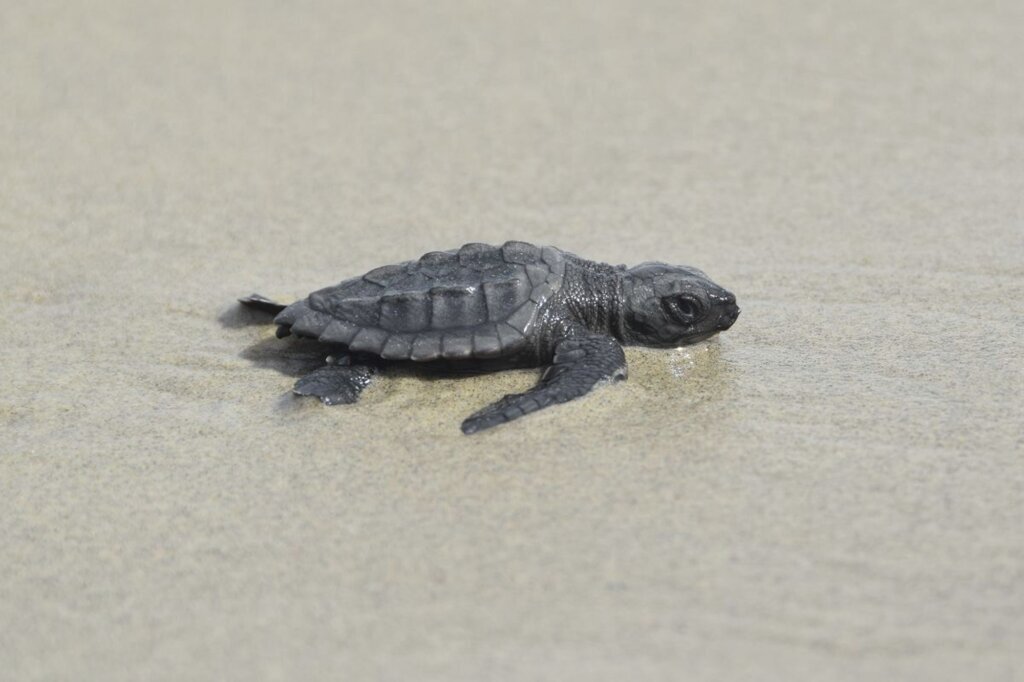 NEW ORLEANS (AP) — The world’s smallest and most endangered sea turtles have hatched in Louisiana’s wilds for the first known time in more than 75 years, officials said Wednesday.

“Louisiana was largely written off as a nesting spot for sea turtles decades ago, but this determination demonstrates why barrier island restoration is so important,” Chip Kline, chairman of the Louisiana Coastal Restoration and Protection Authority, said in a news release.

Crews monitoring the Chandeleur Islands — a chain 50 miles (80 kilometers) east of New Orleans — to help design a restoration project found tracks of females going to and from nests and of hatchlings leaving a nest.

The first tracks were found by a crew surveying birds “before the sea turtle nesting season really kicked off,” said Matthew Weigel, coastal resources scientist manager for the Louisiana Department of Wildlife and Fisheries.

After that crew brought back a photo of a sea turtle “crawl,” the two agencies began weekly flights over the island to look for more. Weigel said he and Todd Baker of the restoration agency were walking between two that they’d sighted from the plane on July 29 when they stumbled on hatchling tracks on the beach.

“There was some high-fiving going on,” he said. They followed those tracks back to a nest they hadn’t known about. There, they found two tiny, newly emerged turtles, which they followed back to the beach.

Weigel said aerial surveys found 52 sets of tracks that experts identified as Kemp’s ridley, though some were “false crawls” where no nest was made.

“The endangered Kemp’s ridley sea turtle has returned to nest on the Chandeleur Islands, highlighting the need to protect this sensitive habitat so it can continue to be home to ocean and coastal wildlife in the future,” said Beth Lowell, vice president for the United States of the environmental nonprofit Oceana.

Loggerhead nests found in 2015 on Grand Isle — roughly 70 miles (112 kilometers) southwest of the Chandeleurs — were the first confirmed sea turtle nests in Louisiana in more than 30 years, according to the statement.

All six sea turtle species found in U.S. waters are protected under the Endangered Species Act. Tens of thousands of Kemp’s ridleys, which grow to about 2 feet (0.6 meter) long, once nested in Mexico, but in the 1980s a low of only about 250 did so, according to the National Oceanic and Atmospheric Administration.

That location in Pass Christian Harbor is roughly 40 miles (64 kilometers) northwest of the Chandeleurs, the easternmost part of Louisiana. The chain has been eaten away by erosion, tropical storms including Hurricane Katrina in 2005 and the BP oil spill in 2010.

The two agencies have been closely monitoring the islands since May as part of work to restore the islands using oil spill money.

Most Kemp’s ridley nests are along the western Gulf of Mexico, 95% of them in the state of Tamaulipas, Mexico, according to NOAA. “Occasional nesting has been documented in North Carolina, South Carolina, Georgia, Florida, and Alabama,” according to its website about the species.

Juvenile Kemp’s ridleys feed in Louisiana’s estuaries. Many species of sea turtles gather around the Chandeleur Islands, feeding in and around the state’s only marine seagrass meadows, the news release said.

“It is well known that the Chandeleur Islands provide key habitats for a host of important species; however, with the recent discovery of a successful Kemp’s ridley sea turtle hatching, the islands’ value to the region has been elevated,” Wildlife and Fisheries Secretary Jack Montoucet said.

Additional nests may be discovered on the Chandeleur Islands as monitoring continues and hatchlings emerge, the news release said. The nesting season peaks in June and July, and eggs take 50 to 60 days to hatch, it said.