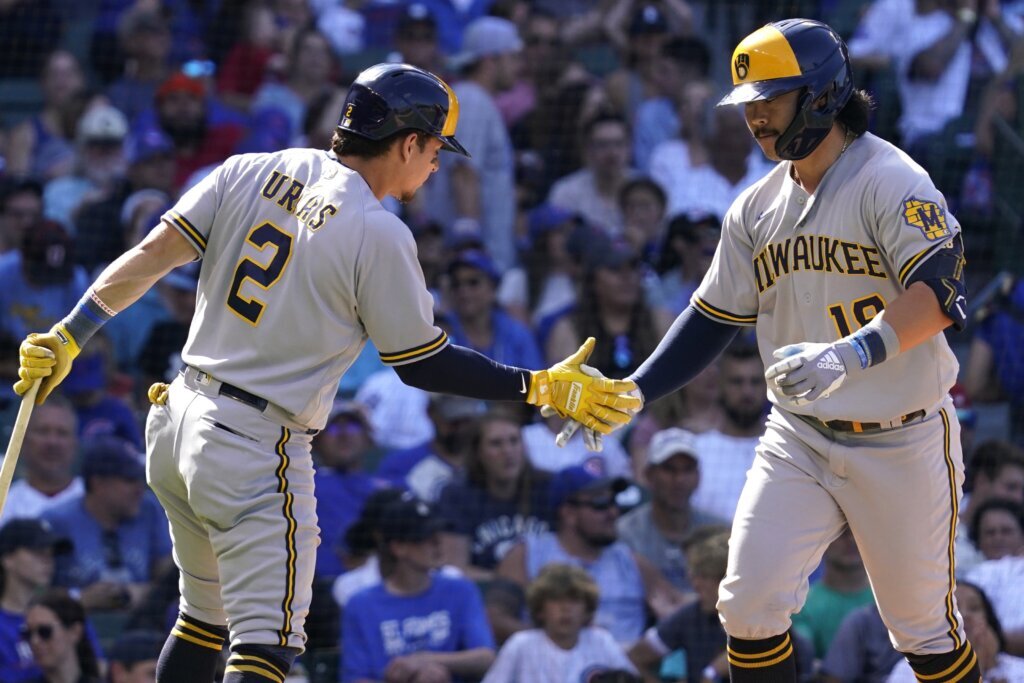 CHICAGO (AP) — Keston Hiura homered twice and drove in three runs, and the Milwaukee Brewers beat the Chicago Cubs 5-2 on Sunday to salvage the finale of their weekend series.

Rowdy Tellez also connected and Willy Adames hit a tiebreaking sacrifice fly for Milwaukee, which had dropped three of four. The Brewers blew three one-run leads during a 6-5 loss to the Cubs in 11 innings on Saturday.

Brent Suter (5-3) got four outs for the win on manager Craig Counsell’s 52nd birthday, and Taylor Rogers worked the ninth for his first save since he was acquired in the Aug. 1 trade that sent Josh Hader to San Diego.

Chicago wasted a stellar performance by Justin Steele, who struck out nine in six scoreless innings. Ian Happ and Seiya Suzuki homered, but the Cubs finished with just five hits.

Chicago had won five in a row and nine of 12 overall.

Adames put Milwaukee ahead to stay when he drove in Kolten Wong with a fly ball to center in the eighth. Wong reached on a leadoff pinch-hit single and advanced to third on two wild pitches by Rowan Wick (3-6).

Hiura made it 5-2 when he hit a two-run shot off Kervin Castro in the ninth. It was Hiura’s second career multihomer game.

Steele allowed two hits — both singles — and walked one. The left-hander is winless in his last five starts, but he has a sparkling 0.79 ERA and 33 strikeouts over his last 22 2/3 innings.

While Steele cruised along for Chicago, Brandon Woodruff kept Milwaukee in the game with 5 2/3 innings of two-run ball. The big right-hander is unbeaten in his last 10 outings.

Woodruff got off to a taxing start when he needed 13 pitches to retire leadoff man Nick Madrigal on a fly ball to right. After Nico Hoerner grounded out, Happ hit a drive to right for his 13th homer this season and No. 100 for his career.

Suzuki added his 10th homer in the fourth, reaching the basket in center, but Milwaukee jumped on Chicago’s bullpen in the seventh.

On Mark Leiter Jr.’s first pitch after Andrew McCutchen was caught stealing, Tellez hit a drive to right-center for his 26th homer. Manager David Ross then brought in rookie left-hander Brandon Hughes, and Hiura went deep for his 11th homer on the year.

It was Milwaukee’s fifth set of back-to-back homers this season.

Former Cubs left-hander Jon Lester, who helped the team win the 2016 World Series, got a big ovation when he was shown on the videoboard in left field. He stood and acknowledged the cheers with a couple waves.

Cubs: 3B Patrick Wisdom was out of the starting lineup after he hurt the ring finger on this left hand during Saturday’s 11-inning victory. X-rays were negative, and Ross said Wisdom is day to day. … Ross said LHP Wade Miley was feeling better after recently experiencing more shoulder discomfort. “I think he’s going to try to get off the bump tomorrow, just push his bullpen back a day,” Ross said. Miley hasn’t pitched in a big league game since June 10.