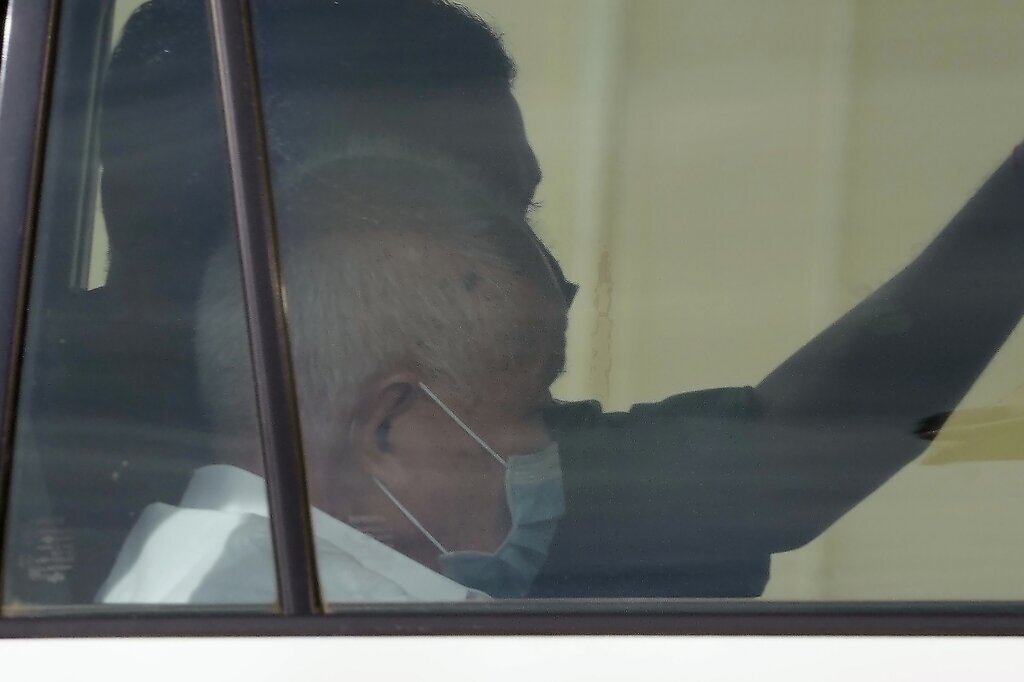 Cambodia’s U.N.-backed Khmer Rouge tribunal on Thursday rejected the appeal of a genocide conviction by the communist group’s last surviving leader in what is expected to be the special court’s last session.

The historic international court issued its ruling on an appeal by Khieu Samphan, who served as head of state in Cambodia’s 1975-79 Khmer Rouge government. He was convicted in 2018 of genocide, crimes against humanity and war crimes and sentenced to life in prison.

The tribunal spent $337 million and 16 years to convict just him and two other defendants in connection with a reign of terror that caused the deaths of an estimated 1.7 million people.

Khieu Sampan denied having had any real say in policies when the Khmer Rouge sought to establish a utopian agrarian society, causing their countrymen’s deaths from execution, starvation and inadequate medical care.

PHNOM PENH, Cambodia (AP) — An international court convened in Cambodia to judge the brutalities of the Khmer Rouge regime that caused the deaths of an estimated 1.7 million people in the 1970s ends its work Thursday after spending $337 million and 16 years to convict just three men of crimes.

In what was set to be its final session, the U.N.-assisted tribunal began issuing its ruling on an appeal by Khieu Samphan, the last surviving leader of the Khmer Rouge government that ruled Cambodia from 1975-79. He was convicted in 2018 of genocide, crimes against humanity and war crimes and sentenced to life in prison.

He appeared in court in a white windbreaker, wearing a face mask and listening to the proceedings on a pair of headphones. Seven judges were in attendance.

Khieu Samphan was the group’s nominal head of state but, in his trial defense, denied having real decision-making powers when the Khmer Rouge carried out a reign of terror to establish a utopian agrarian society, causing Cambodians’ deaths from execution, starvation and inadequate medical care. It was ousted from power in 1979 by an invasion from neighboring communist state Vietnam.

“No matter what you decide, I will die in prison,” Khieu Samphan said in his final statement of appeal to the court last year. “I will die always remembering the suffering of my Cambodian people. I will die seeing that I am alone in front of you. I am judged symbolically rather than by my actual deeds as an individual.”

In his appeal, he alleged the court made errors in legal procedures and interpretation and acted unfairly. But the court noted Thursday that his appeal did not directly question the facts of the case as presented in court. It ruled point by point on the arguments raised by Khieu Samphan, rejecting virtually all and saying its final judgment of several hundred page would be official when it is published.

The final ruling makes little practical difference. Khieu Samphan is 91 and already serving another life sentence for his 2014 conviction for crimes against humanity connected with forced transfers and disappearances of masses of people.

His co-defendant Nuon Chea, the Khmer Rouge’s No. 2 leader and chief ideologist, was convicted twice and received the same life sentence. Nuon Chea died in 2019 at age 93.

The tribunal’s only other conviction was that of Kaing Guek Eav, also known as Duch, who was commandant of Tuol Sleng prison, where roughly 16,000 people were tortured before being taken away to be killed. Duch was convicted in 2010 of crimes against humanity, murder, and torture and died in 2020 at age 77 while serving a life sentence.

The Khmer Rouge’s real chief, Pol Pot, escaped justice. He died in the jungle in 1998 at age 72 while the remnants of his movement were fighting their last battles in the guerrilla war they launched after losing power.

The trials of the only other two defendants were not completed. The former foreign minister of the Khmer Rouge, Ieng Sary, died in 2013, and his wife, former Social Affairs Minister Ieng Thirith, was deemed unfit to stand trial due to dementia in 2011 and died in 2015.

Four other suspects, middle-ranking Khmer Rouge leaders, escaped prosecution because of a split among the tribunal’s jurists.

In an innovative hybrid arrangement, Cambodian and international jurists were paired at every stage, and a majority had to assent for a case to go forward. Under the French-style judicial procedures the court used, the international investigators recommended the four go to trial, but the local partners would not agree after Cambodian Prime Minister Hun Sen declared there would be no more prosecutions, claiming they could cause unrest.

Hun Sen himself was a middle-ranking commander with the Khmer Rouge before defecting while the group was still in power, and several senior members of his ruling Cambodian People’s Party share similar backgrounds. He helped cement his political control by making alliances with other former Khmer Rouge commanders.

With its active work done, the tribunal, formally called the Extraordinary Chambers in the Courts of Cambodia, now enters a three-year “residual” period, focusing on getting its archives in order and disseminating information about its work for educational purposes.

Experts who took part in the court’s work or monitored its proceedings are now pondering its legacy.

Heather Ryan, who spent 15 years following the tribunal for the Open Society Justice Initiative, said the court was successful in providing some level of accountability.

“The amount of time and money and effort that’s expended to get to this rather limited goal may be disproportionate to the goal,” she said in a video interview from her home in Boulder, Colorado.

But she praised having the trials “in the country where the atrocities occurred and where people were able to pay a level of attention and and gather information about what was happening in the court to a much greater extent than if the court had been in The Hague or some other place.” The Hague in the Netherlands hosts the World Court and the International Criminal Court.

Michael Karnavas, an American lawyer who served on Ieng Sary’s defense team, said his personal expectations had been limited to the quality of justice his clients would receive.

“In other words, irrespective of the results, substantively and procedurally, were their fair trial rights guaranteed by the Cambodian Constitution and established law afforded to them at the highest international level?” he said in an email interview. “The answer is somewhat mixed.”

“The trial stage was less than what I consider fair. There was far too much improvisation by the judges, and despite the length of the proceedings, the defense was not always treated fairly,” said Karnavas, who has also appeared before the International Criminal Tribunal for the former Yugoslavia and the International Criminal Tribunal for Rwanda.

“On the substantive and procedural law, there are numerous examples where the ECCC not only got it right, but further contributed to the development of international criminal law.”

There is a consensus that the tribunal’s legacy goes beyond the law books.

“The court successfully attacked the long-standing impunity of the Khmer Rouge, and showed that though it might take a long time, the law can catch up with those who commit crimes against humanity,” said Craig Etcheson, who has studied and written about the Khmer Rouge and was chief of investigations for the office of the prosecution at the ECCC from 2006 to 2012.

“The tribunal also created an extraordinary record of those crimes, comprising documentation that will be studied by scholars for decades to come, that will educate Cambodia’s youth about the history of their country, and that will deeply frustrate any attempt to deny the crimes of the Khmer Rouge.”

The bedrock issue of whether justice was served by the court’s convictions of only three men was addressed by Youk Chhang, director of the Documentation Center of Cambodia, which holds a huge trove of evidence of atrocities committed by the Khmer Rouge.

“Justice sometimes is made of satisfaction, recognition, rather than the number of people you prosecute,” he told The Associated Press. “It is a broad definition of the word justice itself, but when people are satisfied, when people are happy with the process or benefit from the process, I think we can conceptualize it as justice.”