The pair clashed on the undercard of KSI’s back-to-back fights with Swarmz and Luis Pineda on Saturday night.

Deji, the younger brother of KSI, ended his long wait for a victory by stopping Fousey in the third round of their clash.

The 32-year-old’s left eye was completely closed shut, much to the concern of viewers.

One tweeted: “Where is Fousey’s eye?” 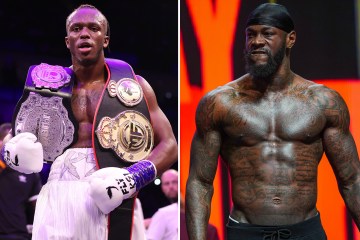 Another said: “Fousey broke his cheekbone and his nose and something wrong with his eye socket?”

One remarked: “Deji really f****d this Fousey up now he got that blackened eye like SpongeBob.”

A dejected Fousey offered no excuses for his defeat, saying: “I might not be the best fighter in the world but when it comes to a fighter in life I know I will win every single time.

“Someone messaged me and told me they wanted to take their own life but I said ‘Brother you don’t want to die, you want the current circumstances to die you never want to give up and quit’.

“Last year I thought my life was over time and time again but I don’t stop and I don’t quit and congratulations to Deji he was the better man tonight.”

On Sunday afternoon, he tweeted: “Congratulations @Deji! You are well deserving of this victory.

“Extremely proud of and happy for you. No one can take this away from you.

“Honoured and grateful to have shared the ring with you on such a historic night.

An elated Deji said in his post-fight interview: “I have the best team ever. I have Daley, the best boxing coach ever, ever.

“I have Leon, the best PT in the game and I have everyone out there showing their love. And that brought me out.”