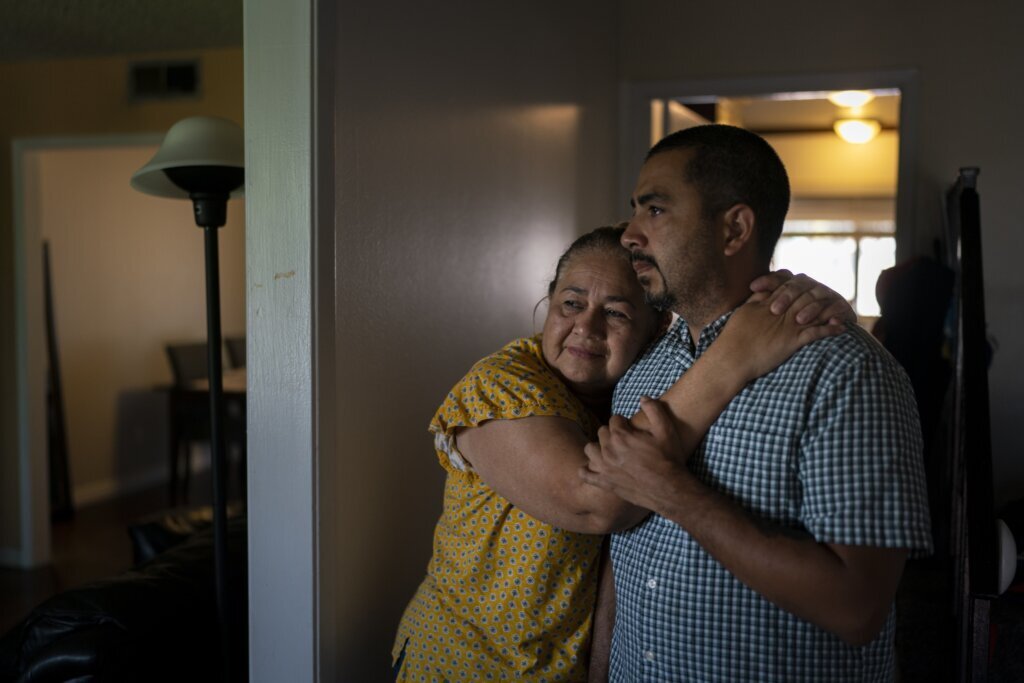 MIAMI (AP) — A Los Angeles attorney detained in Venezuela is pleading for help from the Biden administration, saying in…

MIAMI (AP) — A Los Angeles attorney detained in Venezuela is pleading for help from the Biden administration, saying in a jailhouse message that he feels forgotten by the U.S. government as he faces criminal charges at the hands of one of the nation’s top adversaries.

Eyvin Hernandez, who has been detained for five months, describes in the recording how he has dedicated the past 15 years to public service as an employee of the Los Angeles County public defender’s office, seeking fair treatment for often penniless clients.

“No one should be abandoned at the time of their greatest need and when they’re most vulnerable,” he said in the almost two-minute recording, which was provided to The Associated Press by Hernandez’s family. “However, I don’t feel like my government feels that way about me.”

In a calm voice, Hernandez said he and other Americans imprisoned in Venezuela — there are at least 10, including five oil executives and three veterans — feel “like our government has abandoned us.”

Hernandez’s appeal comes as the Biden administration is under pressure to do more to bring home roughly 50 Americans it believes have been wrongfully detained by hostile governments around the world. Much of the focus is on Russia, where the U.S. has taken the unusual step of proposing a swap of a convicted arms dealer for WNBA All-Star Brittney Griner. U.S. officials have for months been quietly pursuing a separate deal with Nicolás Maduro’s socialist government in Venezuela, which holds the largest contingent of Americans suspected of being used as bargaining chips.

Henry Martinez said his brother sent him the voice message Aug. 21. A copy was also provided to the State Department, which has been weighing whether to turn Hernandez’s case over to the administration’s special presidential envoy for hostage affairs, Roger Carstens.

In the recording, Hernandez said it’s been months since he or any of his fellow Americans have seen a courtroom, nor do they have any hopes of getting a fair trial.

“This place is meant to break you psychologically and spiritually,” he said of confinement at a maximum security prison housing many of Maduro’s opponents. “We’re all innocent, yet we’re being charged and treated as terrorists.”

He said the uncertainty, isolation and human rights violations are taking a toll, with two Americans having already attempted suicide and a third on the brink with daily mental breakdowns.

“If you don’t get us out soon, then there might not be anyone left to save,” he said.

The AP was unable to verify Hernandez’s claims. But United Nations officials have long complained about the lack of independence for Venezuelan judges and prosecutors and about conditions at the facility where Hernandez and several other Americans are being held.

A State Department spokesman declined to comment on Hernadez’s case, citing privacy limitations, but said the agency continuously reviews the detentions of Americans overseas. He also noted that the U.S. government has issued an advisory warning Americans to avoid all travel to Venezuela due to the risk of wrongful detentions and threats from illegal armed groups, especially along the country’s porous borders.

Hernandez, who turned 44 in jail, was arrested March 31 along the Colombia-Venezuela border. His family says he traveled there from the city of Medellin with a Venezuelan friend who needed to get her passport stamped to resolve an issue with her migratory status in Colombia. His family said he never intended to enter Venezuela, and he was due to fly home three days later.

But the two apparently fell into the hands of criminal gangs.

Upon arrival by bus to the city of Cucuta, they hailed a taxi for the short drive to the Simon Bolivar International Bridge, according to an account Hernandez shared with his family. A fourth individual hopped in the front seat, purportedly offering his services as a guide who could help them navigate the confusion at the border, an area overrun by squatters, criminal gangs and a mass of people making their way back and forth in illegal crossings.

Before they knew it, the cab was stopped along a dirt path, and the two were ordered to get out and walk across the invisible border separating the two countries.

Once Hernandez realized his mistake, it was too late to turn back. A man carrying a rifle demanded he cough up $100, according to his family. When he protested that he didn’t have any cash, they put a hood over his head.

When his captors found his American passport, they told him he was in trouble and handed him over to security forces, who kept him incommunicado for weeks.

Adding to the Hernandez family’s anguish is the fact that he isn’t classified as wrongfully detained, a definition that covers Americans believed innocent or jailed for the purpose of exacting concessions from the U.S. Without such designation, a process that can take months, the U.S. government’s ability to push for his release is limited.

At least three of the 11 other Americans known to be detained in Venezuela are in a similar state of limbo. They include Jerrel Kenemore, a computer programmer arrested within a week of Hernandez, and two former Green Berets who took part in a blunder-filled beach attack in 2020 aimed at overthrowing Maduro.

Maduro’s socialist government is a harsh critic of U.S. foreign policy. But more recently, as the Biden administration has shown a willingness to review the Trump-era policy of punishing Maduro with sanctions and calling for regime change, the outlook for a possible release has improved.

In March, the Maduro government freed two Americans following a surprise trip to Caracas by senior White House and State Department officials, including Carstens, who met with Hernandez in a subsequent wellness check on detained Americans in June. Maduro also vowed to resume negotiations with his opponents, although has so far failed to follow through.