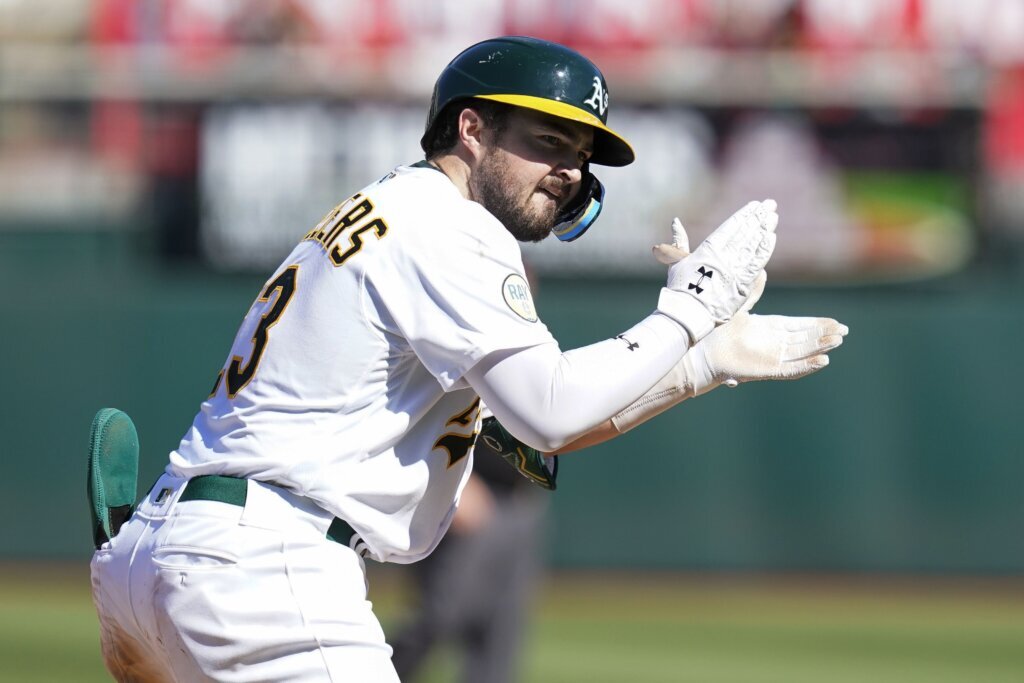 OAKLAND, Calif. (AP) — Shea Langeliers got three hits, including Oakland’s first triple after a strange 81-game drought without a…

OAKLAND, Calif. (AP) — Shea Langeliers got three hits, including Oakland’s first triple after a strange 81-game drought without a three-bagger, and the Athletics beat the Seattle Mariners 5-3 Sunday.

No team in major league history had gone longer without a triple since 1901 until Langeliers, a catcher, hit an RBI drive in the eighth inning. He had two triples this season in Triple-A.

JP Sears (5-0) allowed one run, on Mitch Haniger’s homer, in five innings. Six A’s relievers held the lead for the team with the worst record in the AL.

Seattle, near the top of the wild-card standings, lost for the second straight day to the A’s. Cal Raleigh had two doubles for the Mariners.

Luis Castillo (1-1) failed to reach the seventh inning for the first time in four starts since being traded from Cincinnati to Seattle. He yielded four runs and eight hits in five innings.

Seth Brown, who hit Oakland’s previous triple on May 18, doubled and scored on Sean Murphy’s single in the first. A double by Langeliers keyed a two-run second.

Haniger’s fifth homer made it 3-1 in the third. Oakland added a run in the sixth when Tony Kemp dragged a bunt single and later scored on Stephen Vogt’s single.

Raleigh had an RBI pinch-hit double and Julio Rodriguez singled home a run in the seventh.

The Mariners stranded runners on the corners in the eighth inning, which ended with A’s left-hander Sam Moll coaxing a groundout from Dylan Moore.

Raleigh again doubled with one out in the ninth inning, but Austin Pruitt recorded the final two outs for his first save in two opportunities.

Mariners: LF Sam Haggerty was scratched from the lineup with left shoulder discomfort. Haggerty aggravated this ailment a couple of days ago, manager Scott Servais said. Moore, who would have started at second base, occupied left field instead while Adam Frazier filled in at second. Haggerty entered the game as a pinch-runner in the eighth.

A’s: CF Ramon Laureano is still “moving forward pretty quickly” in his recovery from a strained left oblique, manager Mark Kotsay said. Laureano, who hasn’t been in a game since Aug. 14, played catch on Sunday, one day after taking 10 swings with no ill effects … OF Skye Bolt missed his second start in a row with left knee soreness but felt fit enough to enter the game in the eighth. … RHP Brent Honeywell’s minor league injury rehabilitation assignment will intensify Tuesday when he becomes available to pitch in relief for Triple-A Las Vegas. Honeywell is on the injured list with a stress reaction in his right elbow.